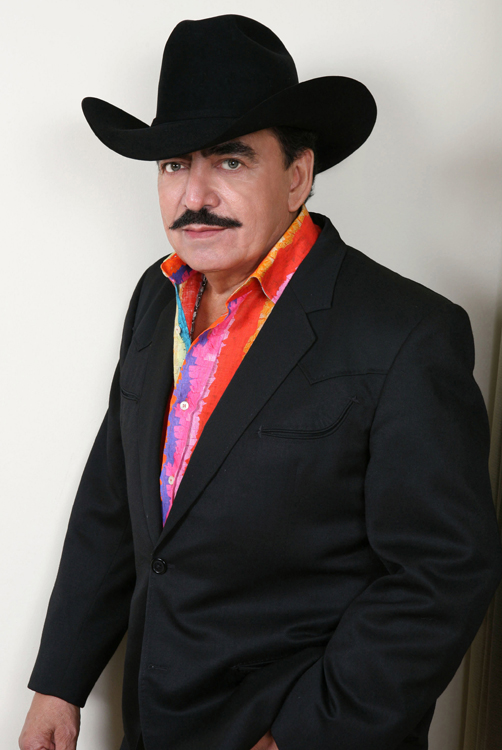 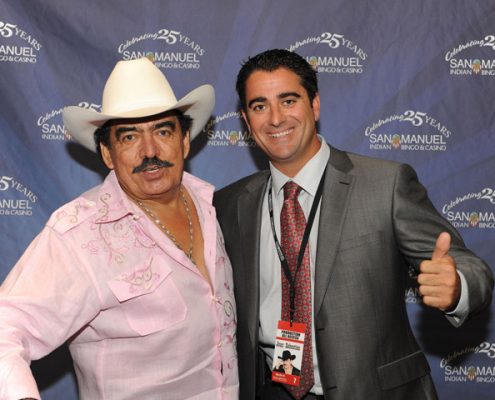 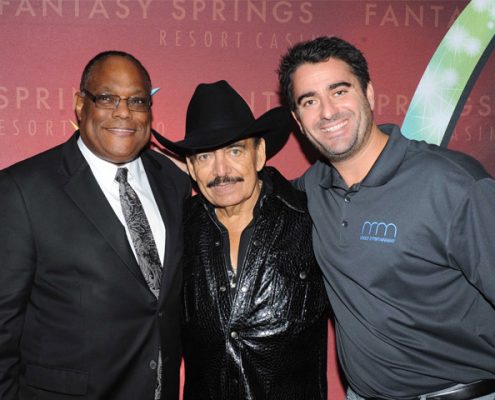 WE WOULD LIKE TO TAKE THIS MOMENT TO SAY THAT WE WILL MISS JOAN SEBASTIAN DEARLY. HE WAS AN AMAZING ARTIST WITH TRUE LOVE FOR HIS FAMILY, HIS MUSIC AND HIS FANS. HE WAS A LONG TIME FRIEND OF M&M GROUP ENTERTAINMENT AND OUR CONDOLENCES GO OUT TO HIS FAMILY AND FRIENDS. JOAN WILL CONTINUE TO LIVE ON AND TOUCH MORE SOULS IN HIS MUSIC.

Working hard, dreaming and struggling since he was 8 years old, Joan Sebastian presented record number 32 of his admirable career as singer, composer and actor, a friendly, honest and sincere man who has the capacity and prudence to observe his immediate surroundings, recognize that he has a “Secret of Love”. This is indeed the title of his new album, a production made by him, which also commemorates his 31 years of recording career.

“I began recording at age 17 and I am 48. I have celebrated each of my years, and underline the word celebrate, because they were beautiful years of struggle in pursuit of a dream, a dream which I already carry from the beginning, the dream of reaching the heart of my people and to nestle there” he says joyfully.

“Secreto de Amor” is also the name of the first single of this release by Balboa / Musart with a total of ten songs. Always struggling to attain a total identification with his public, with the triple image of the horse, the rider and his music.

The concerts of Joan Sebastian have a tremendous scope, with thousands of people unable to even enter to see him. It’s a picture of dynamic consistency. The color of a show that amazes. The public applauds and the orchestra, mariachi performers or group. Joan Sebastian moves rapidly from his saddle and begins to sing.

The lyrics are taken up by the public. Some female admirers approach him to touch his hands and kiss him. It’s the living dimension of a dream. The result of a long struggle. The realization of a continuous success, action and passion. Devotion. Communion. The communicating message of an accomplished artist.

Joan Sebastian still remembers his childhood verses. He dedicated them to Juliantia. There’s a village in the mountain, without noise and traffic sounds. It has a sun which bathes it in light and a moon which lights up the night. When he wrote them, his teacher thought that he copied them from some poetry text. Upon getting to know this very imaginative student, he realized he was deeply mistaken. At the age of 8 the future composer was interned in Guanajuato. Already at that time he changed verses in songs, creating his own lyrics. At the age of 11 he returned to Juliantia, his native land in the State of Guerrero.

In direct and intimate communion with the land he discovered a new kind of happiness and began composing “more seriously”.

After a while he was again interned, but this time in Moreira, where he was under the tutelage of “an exemplary priest, Father David Salgado. Joan Sebastian admits that from that moment on he wanted to become a priest, an idea which was rejected by his father, although he received the support of this grandmother. His determination was so strong, that at age 14 he entered the Conciliar Seminary of San Jose in Cuernavaca, Morelos. There his love of music increased and he was able to do various works with other seminarians. He even composed a mass.

Finally he realized the God’s calling was for music and he leaves the priesthood. He was 17 when he left the seminary to devote himself body and soul to a musical career. To survive he worked as administrative assistant at the Department of Lodging of the Vacation Center Oaxtepec in Morelos where he expressed his emerging musical energy singing through the intercom equipment. It was the year 1968. A year of problems and conflicts in Mexico.

One evening Angelica Maria arrived, looking for a cabin for the night, and while waiting she asked him if he sang. The next day he sang for her six songs. She liked all of them. When he finished, she suggested that he record them and gave him the telephone number of Eduardo Magallanes.

The dream became a hope and it became a golden project. Joan Sebastian went to Mexico City where he was told that Magallanes was on tour. Visiting various companies, he realized that the one that most approximated his style was Orfeon Records. Another aspiring star that was doing studio rounds in those days was Olga Breeskin, the girl of the violin who was indeed hired.

Three months passed. The waiting and postponements never discouraged him. He still hadn’t visited Capitol Records. It was the afternoon of a Friday, lunch time. Chucho Rincon was arriving and told him to return on Monday. He reacted with such noticeable disappointment, that Rincon asked him to return immediately and he heard four songs. He told him: “You will prepare for me the first, second and fourth, and you will come on Monday noon”. It was a weekend of sweet nightmares. He returned on Monday at 7 a.m. at 11:30 he was asked to go to the meeting room and Rincon introduced him: “Here with you is Jose Manuel Figueroa, the young man I talked to you about”.

Six months later he recorded his first record. It was a craze when in the city of Obregon, Sonora 12,000 copies of his song “Descartada” were sold.

There is an anecdote, a historical blunder that still makes him smile. Joan Sebastian remembers that to thank the programmer, he arrived at the station with a box full of avocados and he left them in the receiving room. As a result, his music was never again broadcast, not for the next five years. His gesture was interpreted as mockery because the honored one was had a the nickname “The Avocado”.

With time this executive was replaced by his assistant, Elias Cervantes, who conscious of the fact that an injustice had been committed, finally features him again. At that crucial moment Jose Manuel Figueroa decided to change his name. Joan Sebastian was born. That was toward the end of 1976 and the beginning of 1977. The first hits emerged: “Camino del Amor”, “El Sembrador de Amor”. Until then he had seven singles and only one LP.

That’s when he arrived at Musart where they were convinced that his records did not work. He was told: “Change your name and don’t let anybody know”. It was like an insult to his identity, but then he remembered that in his childhood he sowed in the valleys of San Sebastian, there in Juliantia, his native land where he began to compose. “I want to be known as Sebastian” he replied. Someone commented that Sebastian means “lover”, Pedro “stone” and Juan “free.”

The magic of the last name dazzled him and he exclaimed spontaneously: “I want to be known as Juan Sebastian.” Upon hearing it someone commented that it would be good to know if the name is numerically appropriate. The analysis yielded a negative result: “It doesn’t work”, commented the experts. And the search continued until one of his sisters suggested that he exchange the letter “u” in Juan for an “o”. it was like a miracle. Within a month his record was selling and everyone referred to him as Joan Sebastian (without accent on the last syllable in Sebastian).

The debut of the new artist called Joan Sebastian was with “Camino del Amor” which sold 127,000 copies. A big hit. It was even heard in the United States and in Central and South America. The second single, “Sembrador de Amor” was taken by an Argentinean group who performed it at the 1978 Soccer World Cup.

It was the time he wanted to be a waiter (“and it didn’t work because of the language”), becoming a dishwasher, which lasted for a week. Then he worked in an Irish restaurant where he had to prepare salads.

The record made in Mexico changed his life forever. That first LP moved mountains and suddenly a promoter called him to sing in Texas, offering him one thousand dollars a day. At first he didn’t know what to do with the money and placed it in the freezer wrapped in aluminum foil. He soon left his job as a car salesman.

“Secret of Love’ – year 2000…everyone wants to know exactly to what secret the lyrics refer. In a certain sense this latest album would seem to be a continuation of the previous, titled “Gracias Por Tanto Amor” (Thanks For So Much Love). The artistic evolution of Joan Sebastian projects him as a multidimensional person: singer, composer, arranger, producer, actor in telenovelas, and “showman” of enormous dimensions.

As a singer he has created 32 albums, and as a composer, some of the best singers have recorded his work, including Antonio and Pepe Aguilar, Lucero Alberto Vasquez, Beatriz Adriana, Chelo, Lisa Lopez, Los Freddys, the Grupo Samurai, the Banda Machos, the Banda R-16, the Banda Caña Verde, the Banda Movil. Jose Manuel Figueroa (his son), Graciela Beltran and many others, including Spanish star Rocio Durcal. To his satisfaction, Mexico’s number one, Vicente Fernandez also recorded, making an entire creation of his song “Verdad Que Duele”.

His versatility is so evident, that he has drawn inspiration from all genres and popular trends. That’s why his repertory includes romantic music, rancheras, northern, group and band, regional and international. The emotional rainbow of Joan Sebastian encompasses all tonalities, all colors and all rhythms. His vast discography spanning more than three decades proves it, and in an excellent manner his latest album “Secreto de Amor”, which in its ten songs reflects the most encompassing creative scope of an artist with exceptional creative resources.