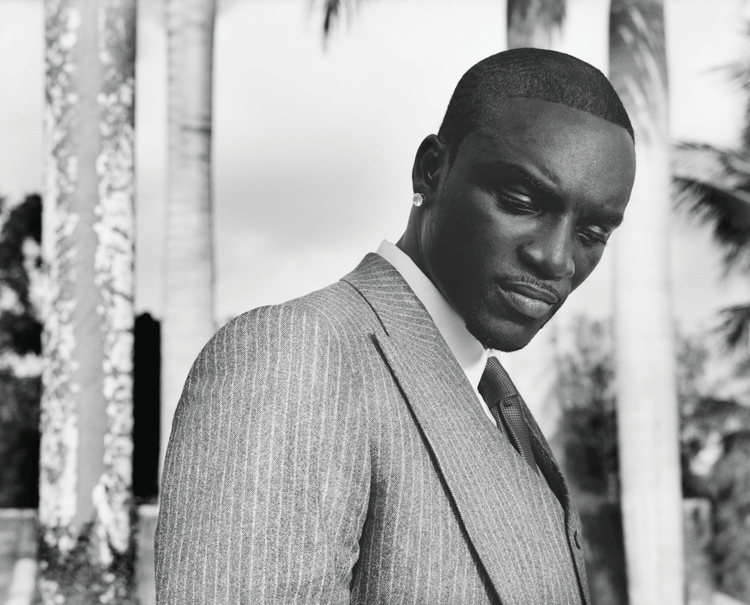 The story of Senegal born singer

After winning music fans over with his 2003 multi-platinum debut Trouble, Senegalese singer Akon returns with more stories from his personal journey via his sophomore CD Konvicted. If Trouble was Akon’s ode to redemption (before his music career took off he served time for car theft), Konvicted picks up at rebirth. His mission now is to reinvent himself through his salvation – music.

The son of accomplished jazz musician Mor Thiam, Akon was introduced to varied musical styles early on. “I grew-up listening to all kinds of music. Obviously I love soul songs, but I also like mixing in other types of music,” Akon confesses. “For every Stevie Wonder track I’ve ever listened to, there is another by Steely Dan that helped shape me as an artist.”

Although the hit single “Locked Up” earned him street credibility, the artist’s multifaceted sensibilities are evident on his second album. Akon produced and wrote all but one song on Konvicted. The album features tracks recorded with Eminem (the first single, “Smack That”), Snoop Dogg (“I Want to Love You”) and Styles P (who laced Akon’s debut hit single, “Locked Up”). Konvicted balances streetwise swagger, studio originality and common sense to create one of the most honest releases of 2006.

“Smack That,” is a deliriously energetic song that has all the ingredients of a masterful club banger and features the aggressive rhymes of eight-mile wordsmith Eminem. Having met Em soon after working with Obie Trice on “Snitch” (the song, which was used on the hit series CSI; an episode Akon appeared in), the two became fast friends. “I knew I wanted Eminem to be on the track, but he is very careful about appearing on too many other people’s songs. When he called and said he was ready to go into the studio, I knew it was a blessing. I was on the first flight to Detroit,” says Akon.

Another stand-out song on Konvicted is the anti-gangsta track “Runnin’.” Recalling the sincerity of soul legend Curtis Mayfield’s timeless Super Fly soundtrack, Akon neo-blues recalls the struggle of stepping away from the game, when he sings, “I’m tired of running from the law.” Ironically, the melodic piece was written while Akon was still doing jail time. “This is a song you can feel, because it’s that real,” Akon shares. “And, I meant every word of it.”

Working in the tradition of pioneer R. Kelly, Akon moves deftly from hard-knock stories to the dance-floor to inspiration ballads; the versus are full of nimble sing-rapping… with Akon multi-tracking his voice to sing his own backing vocals. The song “Gangsta Bop” on Konvicted is a track that could definitely be in a movie,” says Akon. With it’s cinematic appeal and blaxploitation thrills, “Gangsta Bop” is captivating. “My goal is not to glorify street life, but gangstas are people too. They have families and children, and I’m trying to shed some light on that. I can’t tell people what not to do, but I can be a role model.” Akon also teams up with his homeboy T-Pain on the breezy “I Can’t Wait,” the singer has crafted a finger snapping funky love song that blends jazz and big beats.

Still, while Akon’s lyrics are tight, he proves to be innovative on a production level as well. Unafraid of lacing pop music elements like live piano and the zigzag of violins, the haunting ballad “Never Took the Time” is a winner. “When I’m composing songs, I try to be more to the left musically,” Akon reveals. “There is a love and passion I have for trying to create different sounds. In music right now, it’s up to the producers to push for diverse styles.”

Working out of his own Koncast Studios in Atlanta, perhaps the crowning jewel on Konvicted is the powerful “Africa.” A percussion heavy anthem “dedicated to his homeland,” Akon’s lyrics are on point as he discusses various issues from slavery to skin color. “One of my goals with the song “Africa” is to make people more aware of the continent.”

Everything fell into place for Akon when Devyne Stephens, connoisseur of artist development and CE of Upfront Entertainment began shopping Akon’s demo and immediately received several offers from major labels. “We decided to go with Steve Rifkind and SRC/Universal Motown because Steve had the best understanding of what we were trying to achieve. Together we achieved everything we wanted and more,” says Stephens.

The deal was signed in 2003 and Trouble sold more than three million units worldwide. Impressing both music critics and the disc buying public with his well crafted R&B and unique voice, Akon has proven himself as both a brilliant storyteller and gifted musician. His unique style was a shock to the system. In 2004 a New York Times article praised him as a “groundbreaking artist”

In addition to his break-out single “Locked Up” which became the barbeque jam during the summer of 2004, Akon has established himself as an in-demand guest artist and record producer (Young Jeezy, R. Kelly, Obie Trice, Elton John, Daddy Yankee, Gwen Stefani). Nominated for “Hottest Hook” at the 2005 Vibe Awards, the singer’s voice on “Soul Survivor” was a shining moment for both Jeezy and Akon. “I love collaborating with other artists. There are times when I’m in the studio with someone and the chemistry just clicks” says Akon.

Since his debut release, Akon has traveled the world and collaborated with everyone from Snoop Dogg to Ladysmith Black Mambazo. His Konvict music imprint, which will be distributed by Interscope Records. Boasts a roster that includes T-Pain and former TLC member Rozanda “Chilli” Thomas.

With the brilliance of Konvited, label owner, singer, songwriter and producer Akon breaks down musical barriers while also validating his importance as a man for the new millennium. Like fine wine, Konvicted proves that Akon only gets