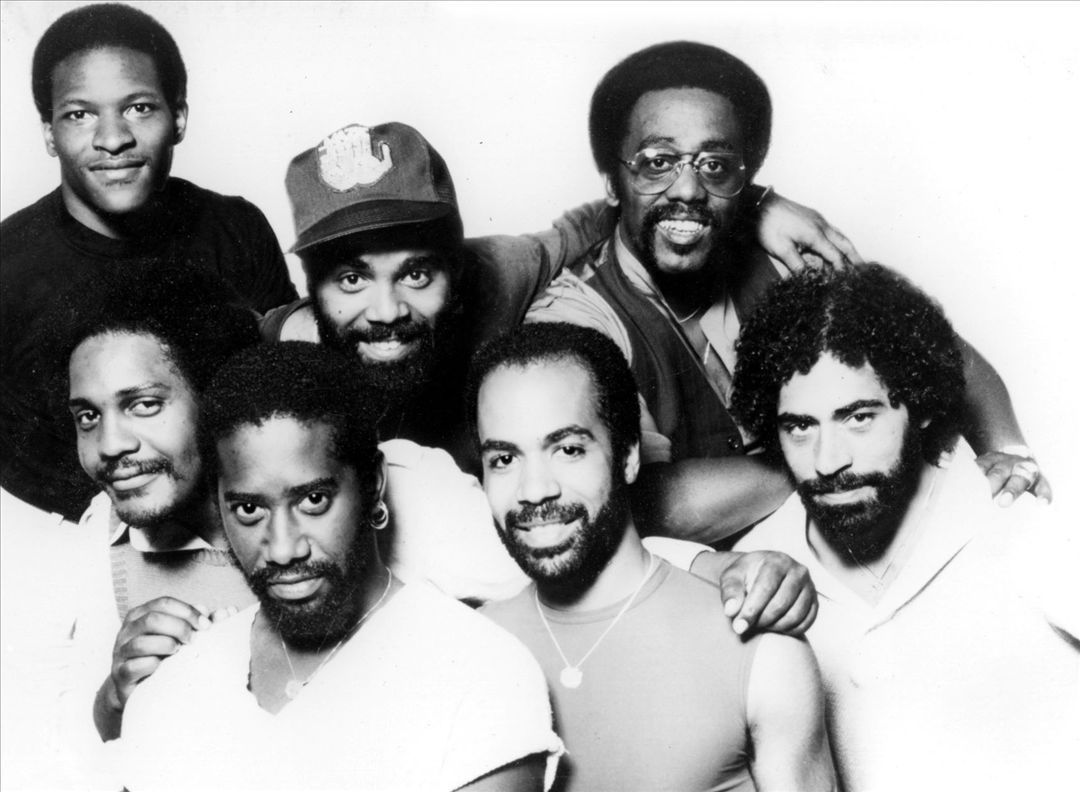 And what a life: as the creative force and founder of Maze, unquestionably one of R&B’s most consistently popular bands, Frankie Beverly can proudly point to a life filled with accomplishment, achievement and contribution.

The multi-talented artist, writer and producer has been involved with music since his early years growing up in Philadelphia. Born December 6, 1946, Frankie recalls that, “like most black artists, I was influenced by going to church. You know, it was like anyone that could sing was featured in a Sunday program! So I did my share of solos in church…a lot of singing!”

Secular music entered Frankie’s life when he was around eight or nine: “The first record I can remember was Lloyd Price’s “Lawdy Miss Clawdy.” I heard it and said, ‘what’s this?’ I loved it! But it was Frankie Lymon and The Teenagers who really turned my world upside down. In fact, I was so blown away by Frankie that I changed my own name – my birth name is Howard! But after I heard Frankie and the guys, I was totally bitten. I knew every one of their hits – “Why Do Fools Fall In Love,” “I Want You To Be My Girl,” “Who Can Explain?,” “The ABCs Of Love”… Every time they appeared on “The Ed Sullivan Show,” I was glued to the t.v. and whenever they came to town to appear at The Uptown Theater, I was right there. In fact, seeing Frankie was the catalyst for me to want to get into music. He was young, just like me, and he was up there doing it, making a living in music…”

Fueled by Lymon’s success and influenced vocally, he notes, “by Sam Cooke, who blended gospel and secular styles so well,” Frankie found himself in a local group during his junior high school years. Word of mouth in Philly about ‘Little Frankie’ (as he was known) led to his first professional gig…at the tender age of twelve! “There was this group, The Silhouettes who had a big hit with a song called “Get A Job.” They lost their lead singer and a couple of the guys in the group were from my neighborhood. They’d heard that I could sing like Frankie Lymon and the next thing I knew, they were at my house asking my parents if I could go on the road with them…”

For about a year, young Frankie found himself doing gigs as a member of The Silhouettes, performing on shows up and down the East Coast and getting his first taste of life on the road. “Before I ever joined the group, I knew that music was what I was meant to be doing so it was like a ‘natural’ thing for me to be performing,” Frankie says. “But after a while, I started feeling like this real young guy with all these old guys and then I knew it was time for me to move on…”

Clear that he wanted to create his own career in music, Frankie says that his family was basically supportive: “I mean, my father was like all fathers at that time. It was all about me getting a job and music didn’t sound like it was something serious to do. So we clashed as I was growing up…but now, I wonder where I would be without him…so on reflection, I got the proper family support to pursue my musical dreams…”

Frankie formed a couple of local groups: “First off, we had The Blenders. We did accapella, doo-wop kind of things and we were influenced by groups like The Moonglows, The Del Vikings, The Dells. It was a trip because you’d start a group and some guys would stick with it, other guys wouldn’t be serious… Anyway, after The Blenders, there was The Butlers and that was when I started recording. We did records for local labels between 1963 and 1968: Guyden, Liberty Bell (which was owned by Leon Fisher, who became my mentor in this business), Fairmount, Parkway, and Gamble, which was the first label that (legendary producer) Kenny Gamble started.”

Frankie’s records with The Butlers were much in the traditional of vocal harmony groups but he says that listening to Sly & The Family Stone in the late ’60s changed his whole musical direction. “Sly was like a ‘dressed up’ James Brown to me,” Frankie reflects. “He wasn’t afraid to come out and be different. Before the Family Stone, black groups did doo-wop or they were a band with a front man. Sly had this self-contained thing that you usually found with rock groups. Once I saw what he was doing with the Family Stone, we changed from what we had been doing to becoming a self-contained unit. And we became Raw Soul. That’s when I started playing rhythm guitar and a little bit on the keyboards…”

The transition from The Butlers to Raw Soul was marked by a couple of records cut for the Gregar label: “One of the owners, George Greiff flew in this guy Jimmy Miller (who worked with The Rolling Stones) from England to produce us…we did this Taj Mahal tune, “Tomorrow May Not Be Your Day” and I talked George into letting me do the “B” side which turned out to be the first time I recorded the song “While I’m Alone.” After working with different producers, I started to realize that no one else could really get what we were about musically…”

Even though Raw Soul (whose line up included Maze percussionist McKinley ‘Bug’ Williams, an original member of The Butlers) was able to work in and around the city, Frankie decided that “Philly wasn’t going to be the place for what we wanted to do… So, in May 1971, we headed out to the Bay Area, where all the bands were based – you know, Sly, Santana, Cold Blood. By that time, we were doing 80% original material, most of which I was writing…”

After an eventful trip across country, Raw Soul landed in Oakland and, “it was rough! We slept in the bus and we had a hard time getting gigs. I remember, one night we met this girl and she loved our music. We didn’t have an agent or anything and she promised she would get us work…and in a month, she had us doing gigs. We landed a job at a club in San Francisco called The Scene and we were there for a year. The club owner decided to invest in us and we recorded a whole album of songs. That became the basis for the first Maze LP…”

A major turning point in the transition from Raw Soul to Maze occurred after Marvin Gaye’s sister in law caught one of the band’s performances. Suitably impressed, she mentioned the group to her sister Jan, knowing that Marvin was getting ready to hit the road and was actively looking for a backup band. “Jan came to see us and fell in love with what we were doing and a week or so later, Marvin Gaye was sitting there watching us do our thing! I can’t describe how I felt,” Frankie says, “because he was an idol of mine…and I couldn’t believe he was checking us out!”

Gaye was so inspired by the group that he took them out on the road, letting them perform some of their original material as an opening act, “really hanging in there with us, paying our rent, helping us in every way he could.

He loved me like a little brother and certainly working with him helped bring our demos back to life. We sent them out again – the first time around, no one was interested. This time, we got a call from Larkin Arnold at Capitol Records about a week after he got the tape…and we had our first record deal!”

The story of Maze’s rise to fame and consistent success has been well documented but, for the record, the band – under Frankie’s creative direction and leadership – has enjoyed a run of close to thirty hit singles since 1977, nine of which have been Top 10 R&B charted singles including the classics “Running Away,” “Love Is The Key,” “Back In Stride,” “Too Many Games,” “Can’t Get Over You,” and “Silky Soul.” Eight of the group’s ten albums have gone gold, all the way from their 1977 Capitol debut to the 1993 Warner Brothers’ album, “Back To Basics.”

In 1981, Frankie and company made their first trip to the U.K., blowing audiences away with their dynamic ‘live’ performances and establishing a bond that continues to this day. The acceptance of the group’s music in Europe was a defining event for Frankie: “It was unbelievable to me! I was looking for black folks to be at the shows because that’s basically who makes up our audiences here – and when I looked out there, I saw a crowd that was 99% white, grooving, digging our music…”

When Frankie reflects on over thirty years as a music maker, he says that the early years spent paying dues “prepared me for what has happened to me and the band. By the time we started being successful, we were ready and we didn’t get overwhelmed or caught up in all that ‘star’ stuff. I was just thankful that people liked our music. But when I started out, I never looked for any of this…I mean, it blows me away that our logo has caught on and that people even have a ‘thing’ about my hat, which has become almost like my personal trademark. You see, I would have been happy selling 20,000 or 30,000 albums. To have all these gold records is much more then I ever hoped for…”

In addition to giving audiences a truly exciting ‘live’ musical show on consistent yearly tours, Frankie has also been responsible for introducing several artists to the public. “I guess beyond what we’ve done with Maze, the second thing I’m most proud of is that we’ve supported other artists. We were the first group to give Natalie Cole a chance during her comeback years (in the mid-’80s). We took Anita Baker out as our opening act on her first national tour and did the same thing with Regina Belle and Toni Braxton…and it makes me feel great to see how each of those artists has gone to have great success…”

Asked what he wants to accomplish in the future, Frankie reflects, “The biggest thing is being able to keep up with what people expect of us. My thing is trying never to let the people down. You know, I still get butterflies real bad before I go on stage but once I hit that stage, I’m ready. But I don’t take anything for granted and I know you have to earn your wings everyday…”

A Bay Area resident since the band moved there in the mid-’70s, Frankie says that his main personal goal is “to maintain. I don’t want to lose my ‘thing.’ I’d like to refine what I do and maybe say more in my music. But I feel so blessed: people show that they really respect me and the band and I just want to keep giving the people what they want…”