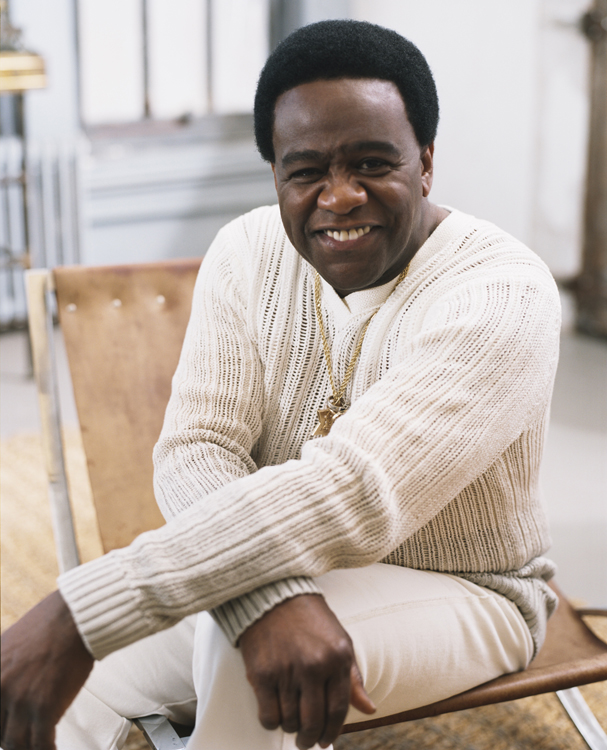 The title of Al Green’s Lay It Down truly tells it like it is. Conceived as a collaboration between the soul legend and a handful of gifted young admirers from the worlds of contemporary R&B and hip hop, the album is drawn from a series of inspired sessions that yielded the most high-spirited, funky and often lushly romantic songs of Green’s latter-day career. The album is a refreshingly old school jam, with everyone laying down the music together, face to face, heart to heart, soul to soul.

The project features the sophisticated R&B voices of singer-songwriters John Legend, Anthony Hamilton and Corinne Bailey Rae, and it was co-produced with Green by two of hip-hop’s most innovative players, drummer Ahmir “?uestlove” Thompson from the Roots and keyboardist James Poyser, the go-to guy for high-profile artists ranging from Erykah Badu to Common. Add in Brooklyn’s celebrated Dap-King Horns (Sharon Jones, Amy Winehouse), guitarist Chalmers “Spanky” Alford (Mighty Clouds of Joy, Joss Stone) and bassist Adam Blackstone (Jill Scott, DJ Jazzy Jeff), among others, and you’ve got a modern soul-music dream team, fronted by the most expressive voice in the business.

“The reason why we are doing this is because we all idolize Al Green,” declares ?uestlove. “Even today, nobody has range like him.”

Green himself envisioned this project as a way to reach out to younger artists, particularly in the hip hop community, to find common musical ground and help spread his healing message of, as he likes to put it, “L-O-V-E.” He gamely plunged into the world of the Roots and their posse, cutting tracks with them in New York City. His youthful collaborators took this as an opportunity to get right into Al’s head, turning the sessions into a master class about how to create that sublime Al Green sound and keep it relevant for today.

As Green explains: ”They didn’t want to get too far out from the foundation that [Hi Records producer] Willie Mitchell and I built—‘Call Me,’ ‘I’m Still In Love With You,’ ‘Let’s Stay Together.” That’s all good, they said, but we want to play what we hear you being about in 2008. We want to keep all of the aura, but we would like to have freedom enough to spread our wings and express ourselves. The Roots, all the guys from Philly who came up to do this stuff with us—they were incredible. I could relax because I knew the people were capable. Everyone was coming up with ideas, everybody was pitching in, everybody was helping.”

It all began in 2006. ?uestlove and Poyser arranged for a get-acquainted session at Electric Lady Studio in Manhattan’s Greenwich Village. As Green recalls, “That was such a session. We sketched out eight songs and really started the project. We were just spitting out songs right and left; there’s no possible way I could write them all out. I was writing the verses to this one, the bridge to that one. Everybody contributed and that’s why it feels so good. There were no big ‘I’s and little ‘you’s in there. All of us dreamed it up together.”

That date provided basic tracks for nine out of eleven tunes. Subsequent recording took place over the next two years to accommodate the artists with whom Al wanted to work. Each session replicated the feel of that first one, with the players swapping ideas, grabbing pads and pencils to furiously scribble lyrics, singing out snatches of melodies, passing along riffs. Green himself vocalized many of the parts that the strings and horns would later play. He admits, “That’s the only way I know how to work, that’s what I’ve done all my life. You just write it from here.” He taps his heart. “That’s what we do every Sunday. We never write a sermon now. If you can’t preach out of here”—tapping his chest again—“you have nothing to say anyway. It’s all from the heart, this whole album, from start to finish.”

“It’s an honor to be able to work with Al Green, who I have always loved and respected,” says John Legend. “He has been an important part of black music history, and pop music history for that matter. Al really is a magical singer.”

Legend had come in to sing on one track the band had worked up, but then heard an unfinished version of “Stay With Me (By The Sea),” a song Green had been developing with Bailey Rae. Legend immediately knew that one was meant for him. That song illustrates the cooperative spirit that distinguishes Lay It Down. ”John is singing it, I’m singing it, Corinne and I are singing the background,” Green explains. “We’re all included. It’s personal, about my own life, but still everyone can feel what I’m talking about.”

Green was especially impressed that Bailey Rae flew all the way from London to sing with him. She was just honored to be there: “I was really drawn in by Al’s voice; it’s so distinct, and so fluid.” After she arrived, Green recalls, Corinne went straight to work: “She’s a tiny little thing with a big guitar. She’s just playing and singing and the musicians went to sit in, the drummer, the bassist. She wrote a verse, then I wrote a verse and we both worked on the bridge.” In fact, Green insisted that Bailey Rae start it off, performing in her warm, intimate style the verse she’d just written.

Hamilton and Green perform gospel-style testifying over the slow-burning groove of the title track, and the pair engages in fierce call and response on the funky chorus to “You’ve Got the Love I Need.” “It feels good when you listen to him,” Hamilton says of Green, and Green returns the compliment: “On his records, Anthony is always singing about pleasing and satisfying his lady—I want you to be happy, I want us to be together. I’ve been preaching for 30 years and I said, that’s right, the more we need each other, the less difference we see between us. You have to take a chance on love. I know there are some hateful people in the world that would break your heart in an instant. But the big man upstairs is saying you’ve got to take a chance. It’s better to love and be heartbroken than never to have loved at all.”

Looking back on these collaborations, Green decides: ”I couldn’t ask for any more than what Corinne, Anthony and John put into the album, because they came and they sung their heart. And when a person does that, I’m going to give you the best I feel too.” But he offers us even more on the final track, “Standing In the Rain.” The arrangement is an ebullient update of classic Memphis soul and the words convey the sort of message that the Reverend Al would like to leave all of us with, from the young listeners about to discover him to the loyal fans who’ve followed him all these years.

“’Standing in the Rain’—that don’t mean good times,” Green explains. “I’ve got afflictions, I’ve got trials, I’ve experienced all the things that can hold you back. But I refuse to be held back.” Lay It Down is surely testimony to that. Al Green may occasionally sing about his own tribulations, but mostly he wants to offer the answer to ours: L-O-V-E is all you need.