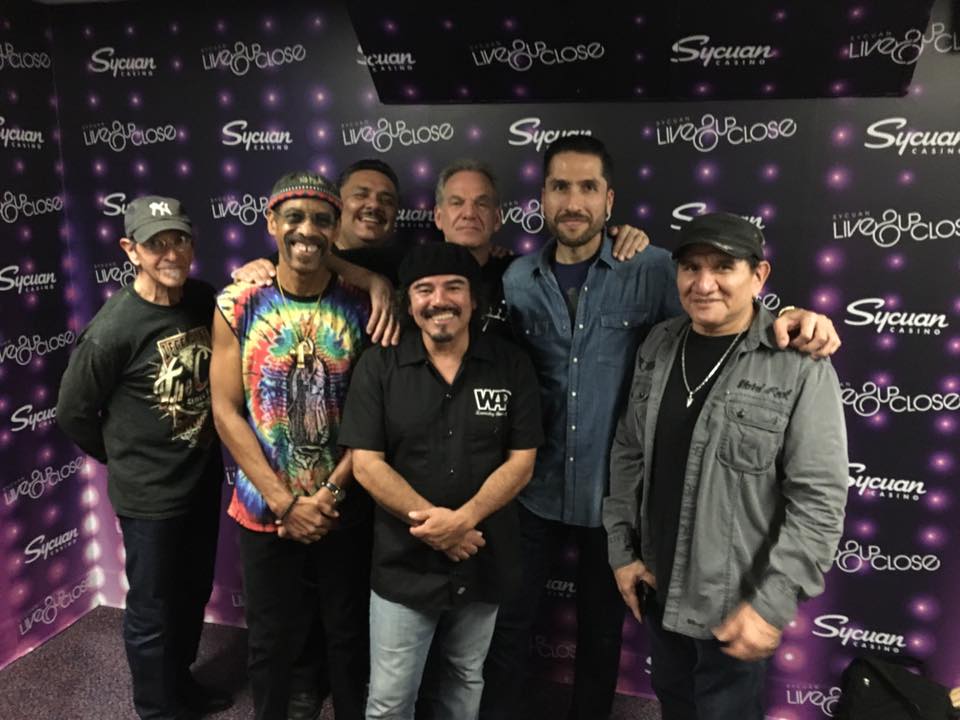 An American original; WAR was the first and most successful musical crossover phenomenon that forever fused rock, jazz, Latin, and R&B, while transcending racial and cultural barriers with a multi-ethnic line-up; a musical melting pot and an enduring influence that has sold nearly 25 million records to date.

Today, WAR is a permanent part of America’s pop cultural landscape. A touring act that performs 150 shows a year and whose catalogue of timeless hits permeates our everyday lives. WAR classics have been featured in countless movies, television shows and commercials. Films such as The Mexican, How High, Remember The Titans, A Knight’s Tale, Boogie Nights and Lethal Weapon 4; T.V. shows such as ER, That Seventies Show, Bernie Mac, The Job, The Simpsons and the theme to the George Lopez Show; TV ads for products like Nissan, Mitsubishi, Miller Brewing, Burger King and Sprint PCS have kept WAR music in the fore.

The music has also been re-spun by many contemporary artists from Janet Jackson to Korn, Smashmouth to Shaggy and from Macy Gray to TLC with covers or samples of WAR hits.

WAR, the original street band, was the brainchild of veteran record producer Jerry Goldstein (“My Boyfriend’s Back”, “Hang On Sloopy”, “I Want Candy”) and rock legend Eric Burdon (ex-lead singer of the top British band The Animals). “I first saw some of the guys who would eventually become WAR playing at a topless beer bar in the San Fernando Valley, backing Deacon Jones, the pro football player, and knew immediately how potent these kids were,” states Goldstein. “I was friends with Eric and he was ready to throw in the towel on the music scene and return to Newcastle. He was tired of the ‘rock’ thing and desperate for a fresh authentic sound. I called him the morning after I first saw the band and made him return to the club the next night with me. Eric was so blown away by what he had heard that he jumped on stage to jam with them. The guys were so sheltered, that they hadn’t even heard of Eric or The Animals. I had them in the studio within a week, and the rest is history!”

The year was 1969, and these ‘kids’ had the nerve to carry the name WAR at a time when peace was the slogan in an anti-Vietnam America. “Our mission was to spread a message of brotherhood and harmony,” states WAR founder, singer/keyboardist Lonnie Jordan. “Our instruments and voices became our weapons of choice and the songs our ammunition. We spoke out against racism, hunger, gangs, crimes, and turf wars, as we embraced all people with hope and the spirit of brotherhood. It’s just as apropos today”

From the beginning WAR was a concept; a musical laboratory. As Burdon’s back band, it was the vehicle for Goldstein (as producer/songwriter) and Burdon (as lead singer) to experiment with the blending of many musical styles and influences. “At the time, I didn’t envision WAR as a separate entity. It was just a band to back Eric. I kind of thought it would change with his musical moods” says Goldstein. “It turned out to be that constantly evolving device, just without Eric Burdon.”

Nevertheless, Goldstein’s spontaneous impulse to scratch Burdon’s musical itch would yield a mother lode of chart gold and platinum. WAR would wind-up being honored with 17 gold, platinum or multi-platinum awards which include the triple platinum The World Is A Ghetto, double platinum Why Can’t We Be Friends? and Greatest Hits, platinum Deliver The Word, WAR Live, All Day Music, Best Of WAR and…more and Platinum Jazz, and gold Eric Burdon Declares WAR, Galaxy, and The Music Band.

Burdon and WAR toured extensively across Europe and the States, garnering rave reviews from mainstream and music press alike. England’s New Music Express called WAR “the best live band I ever saw” after their first UK gig in London’s Hyde Park. Musicians on both sides of the ocean were buzzing about this new band. Jimi Hendrix jammed with WAR at Ronnie Scott’s Club the night on which he died.

A second Burdon and WAR album, a two-disc set, The Black Man’s Burdon, was released (1970) and an exhausted volatile Burdon bailed out on WAR in the middle of a European tour. Already starting to assert themselves, WAR finished the tour without him and returned to record an album without Burdon.

When Eric Burdon and WAR’s success outlasted the mercurial Burdon’s attention span, Goldstein was faced with trying to make WAR stand on its own. The result was WAR’s 1971 self-entitled debut album. While this album met with only modest success, it laid the groundwork for things to come. “They loved playing live and toured constantly. The experience of making the first album was enlightening to all of us, especially me. I really felt I got an understanding how to make this work and rushed them back into the studio to cut the second album” says Goldstein.

In late 1971 WAR released All Day Music, the title track would be the group’s first hit single, and their first gold single “Slippin’ Into Darkness” followed propelling the album to over 1_ million sales and a winning streak that would continue for years.

In 1972 the band’s sound was refined and deepened with the release of The World Is A Ghetto; a celebratory, reflective, and gritty album which was recorded in just 29 days with Goldstein and legendary British recording engineer Chris Huston behind the recording console. Its first single, “The Cisco Kid” shipped gold and brought the band a following in the Hispanic community that has remained loyal to the group to this day. The thought provoking title song “The World Is A Ghetto” fueled the album to the Number One chart spot in Billboard and was voted Billboard’s Album of the Year.

The next album, Deliver The Word (1973), contained the hits “Gypsy Man”, “Me And My Baby Brother”, and a re-recording of “All Day Music”. This album proved a real challenge for the band since the pressure of their previous hits and too much focus on enjoying the fruits of their success made concentration difficult. Despite these conditions, the album went on to sell nearly two million copies.

It was 1975 when the Why Can’t We Be Friends? album was released. It contained the hit title track, “Low Rider”, and “Don’t Let No One Get You Down”. This year saw WAR’s touring, record sales, and notoriety reach new heights. They performed at the first Congressional Black Caucus and witnessed their hit “Friends…” played as a soundtrack to the first U.S.-Soviet space mission in which Astronauts and Cosmonauts linked up in the spirit of friendship. “Friends…” stayed on the U.S. charts for thirty-one weeks and earned the band yet another platinum-plus album.

Exhausted from a non-stop schedule, the band took a year long hiatus from recording, but did release a Greatest Hits LP, which contained one new song, “Summer”. War became the first group to ever include a new cut on a Greatest Hits package. With its easy flowing style the single went gold and earned them even more riches.

Still another compilation followed in 1977 with the release of Platinum Jazz, which gathered WAR’s extended jams and instrumental pieces and was released on the Blue Note jazz label. It became Blue Note’s first Platinum album.

1977 found WAR the funky band in a “funky” place. Disco, with its programmed beats, slick production and shallow lyrics, was dominating the music scene and the un-constructed and free form street music that defined WAR was clearly not in vogue. Still, the group managed to attain success with the album Galaxy and its sleek, dance-grooved, spacey lyric title single. “Galaxy was inspired by Star Wars and just fit into vibe of the time.” Goldstein remembers.

While Galaxy inspired by a film, ironically WAR’s next project would be a soundtrack album for the movie “Youngblood.” in 1978. The story of a Los Angeles street kid starring Lawrence Hilton-Jacobs, of the popular 70s television series Welcome Back Kotter, would be a flop and the WAR soundtrack would fly under the radar.

Although, WAR would never rekindle the level of prosperity that was reached in the mid-seventies, it continued to record releasing the albums: The Music Band (1979), The Music Band 2 (1980), and Outlaw (1982). The singles “Outlaw”, “You Got The Power”, and “Cinco De Mayo” were warmly embraced by WAR fans.

During the eighties, WAR began to focus on what would be the group’s true calling to this very day: touring. In the beginning it was very hard, small crowds, bad venues and low pay, but the band persevered. “It was the spirit of survival and the belief we few remaining original members had in our music that carried us forward”, reflects original member Lonnie Jordan. “There were moments when even I wanted to call it quits, but I am thankful I kept going and now live to tell the tale”.

The band’s popularity has grown steadily ever since, as a result of the commitment to being road WARriors combined with great increases television appearances, record sales, use of their music in film, television and commercials, samples and covers by other recording artists. A big shot in the arm to WAR’s presence on the touring scene was the release of 1994′s Peace Sign, an album well received by critics and fans. WAR now tours over 150 dates a year to audiences ranging from tens of thousands to intimate clubs.

WAR’s consistent catalogue sales and thriving tour business is a tribute to the timelessness of its music and message. Perhaps, nothing epitomizes this truth greater than the fact that WAR has twice been honored by its hometown of Los Angeles, over twenty years apart, for its music making positive contributions to the betterment of the community.

“The world is still a ghetto”, says Lonnie Jordan, echoing the title of the early album and song. “There will always be a reason to play our songs. When you come back to reality, you pull down WAR, because WAR is reality. We have a lot of second-generation fans and they’re seeing the same things their parents saw. They’re hearing the same messages. We’re like Levi’s,” says Jordan, “and there’s nothing nostalgic about Levi’s. In fact, they’re not really good and funky until they’ve been worn awhile.”