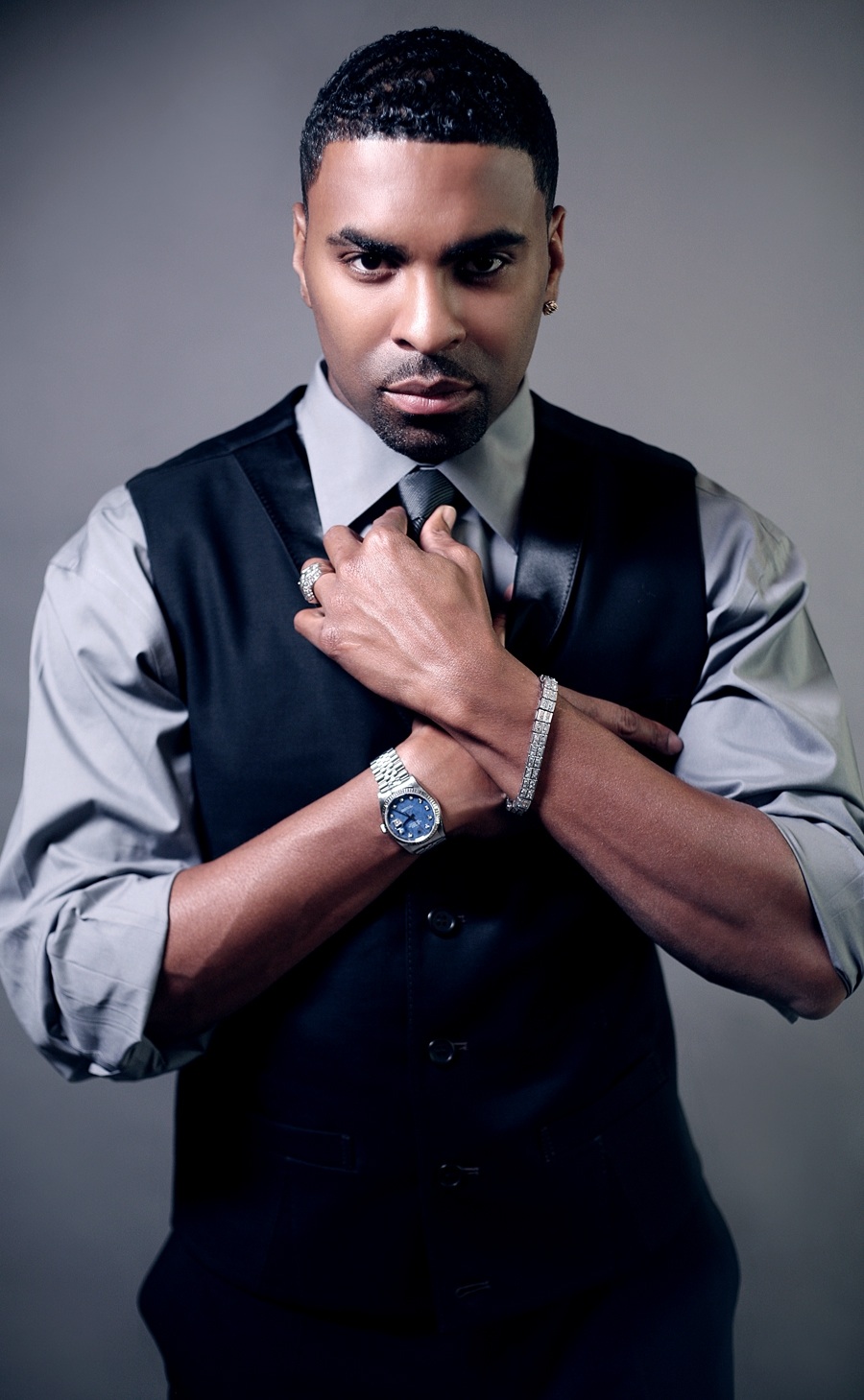 Returning to the forefront of the music world after a four-year hiatus from making records, premier performer Ginuwine is back in the saddle with strong material and his trademarked style. “ I’ve matured a lot since I was last on the scene in 2005,” Ginuwine says. “I wanted that growth to be reflected in my music. Forgot about singing about a club or some drink, I’m trying to take it back to the blueprint that Marvin Gaye and other soul legends designed.”

With the release of his sixth disc A Man’s Thoughts, it is obvious that Ginuwine has lost none of the soulful prowess that first made him a star in 1996–the year his debut The Bachelor changed the sound of urban pop. “This is a new beginning for me, and the work I put into A Man’s Thoughts makes me proud.”

Recording over forty songs in a matter of months, Ginuwine recalls that the concept for A Man’s Thoughts came to him midway through the process. “I’m a married man with a family, so I like to think that I’m wiser than I was ten years ago,” Ginuwine confesses. “I’m not doing back flips on stage nor am I singing songs that are as raunchy. I’ve come into my own, and I think the songs reflect that growth.”

Leading off with his newest single “Last Chance,” an exquisite collaboration with producer Bryan Michael Cox, the Washington , D.C. based singer has recorded an anthem for dudes tired of being players. “I wanted to make a song that men could definitely relate to,” Ginuwine explains. Opening with a cool guitar, the song slowly builds as Ginuwine struggles with himself to become “a different kind of man.”

Having known producer Bryan Michael Cox since the beginning of his career, Ginuwine says, “When I was ready to go back into the studio, Bryan was there for me.” In addition to the stellar single, Cox and songwriter Johnta Austin contributed their beautiful quiet storm sensibility to “One Time for Love.” With its smooth synths and loverman vibe, Ginuwine states, “We go through so many ups and downs in our lives, but I’m convinced that love conquers all. That is the message behind that song.”

No stranger to stardom, Ginuwine first emerged on the music scene in 1996 with the multi-platinum disc The Bachelor. Described by one critic as “silky, seductive vocals purred beside Timbaland’s jagged, hyperkinetic beats to create a uniquely edgy R&B sound,” The Bachelor became an instant classic. “Pony,” the daring first single, peaked at number-one on the Billboard Hot R&B/Hip-Hop Singles & Tracks for two weeks in late 1996, and reached number six on Billboard’s Hot 100.

Having grown-up as a Michael Jackson fan, Ginuwine was no slouch when it came to practicing to perfect his showman skills. “I was a little kid when I saw the Motown 25 special,” Ginuwine remembers. “After that I became the boy in the mirror. My aunt gave me a glittering glove, my mom bought me a red leather jacket and I spent all my time dancing and singing.” By the time he was 12, Ginuwine was already in his first group Finesse Five.

Leaving home at 17, after more than a few clashes with his parents, Ginuwine worked various jobs including a KFC counter person and construction worker. Yet, it wasn’t until he hooked-up with producers/songwriters Timberland, Missy Elliott and the late Static Major (all of them were discovered by former Jodeci leader DeVante Swing) that Ginuwine’s career began to take off.

“When Timbaland and I did The Bachelor, that was one of the biggest moments in my life,” Ginuwine recalls. “Not everyone has the opportunity to be so popular with their first release. Believe me, I know I was blessed.” In addition to the cyberfunk bounce of “Pony,” Ginuwine’s follow-up singles “Tell Me Do U Wanna” and a blazing cover of Prince’s “When Doves Cry” helped to make The Bachelor revolutionary.

While some folks might have written-off Ginuwine as just another pretty boy destined to be a fad, he proved the naysayers wrong when he returned with the brilliant sophomore project 100% Ginuwine. Featuring the hits “So Anxious,” “What’s So Different,” “Same Ol’ G” (which was also showcased on the Dr. Dolittle soundtrack in 1998) and “None of Ur Friends Business,” music writer Matt Diehl defined the double platinum smash as “a sensual peek into a futuristic bachelor boudoir of soul.”

Though Ginuwine’s presence has been missed on the charts during his absence, he has been doing much touring both domestically and overseas. As expected, the singer is no slouch when it comes time to take it to the stage.

“I’ve performed in London , Paris , Italy , and the appreciation factor is so great,” says Ginuwine. “The audiences always show me such love and understanding. I’m not playing when I get on that stage. Still, it was for the love of my fans and the audiences that turns out to see me that I decided to record new material.”

After a ten-year relationship with Sony Records, Ginuwine decided he needed to regroup. “My booking agent was friends with Kedar Massenburg, who then became my manager,” Ginuwine says of signing with Kedar Entertainment. A twenty-year veteran in music and entertainment, Kedar is a neo-soul beacon who once managed D’Angelo, helped groom rhythmic pioneers Erykah Badu, Chico De Barge and India Arie and was CEO of Motown Records. In addition to Ginuwine, other Kedar Entertainment artists include Joe and Chico DeBarge.

Teaming-up with a few creative collaborators that include songwriter R.L. Hugger (Next), singer Brandy, rapper Bun B (formerly of UGK) and, of course, producer Timbaland, the well-toned crooner put together a rhythmic collective that he could trust. “Tim and I are like brothers,” Ginuwine says of the supa producer who laced him with the hypnotic “Get Involved.” Leaning back in the chair, Ginuwine smiled. “We still have a good vibe in the studio and, once we started working, it felt like no time was lost.”

Newcomer Oak, a Turkish-American producer based in Atlanta who previously worked with Chris Brown, Jennifer Lopez and Raven Symone, constructed the retro banger “Open the Door.” Written with R.L. Hugger, the song pays homage to another of Ginuwine’s aural heroes, Prince. “Those guys did their thing on that song,” Ginuwine says, smile beaming. “Oak and R.L. are a wonderful team. From the moment I first heard the track, I knew ‘Open the Door’ was going to be a big song.”

The talented production duo also worked on the frantic female empowerment song “Show Off,” yet another standout track. “This song is dedicated to women who suffer with body issues,” explains Ginuwine. “I just wanted them to feel good about themselves and to ‘Show Off’ what they got. No matter what size they might be, they are still beautiful to me.”

In his down time, Ginuwine still listens to artists New Edition, Jodeci, Mint Condition and Boys II Men. “I’m not hating, but I just can’t muster much enthusiasm when it comes to newer artists. The music is good, it’s just not as good as it used to be.”

Reflecting on the work that went into finishing A Man’s Thoughts, Ginuwine is philosophical. “Putting together a good album is like making a puzzle. You have to make sure all the pieces are in order for the picture to be right.” As a picture of Ginuwine’s world in 2009, A Man’s Thoughts will surely to go down as one of R&B’s more perfect moments.