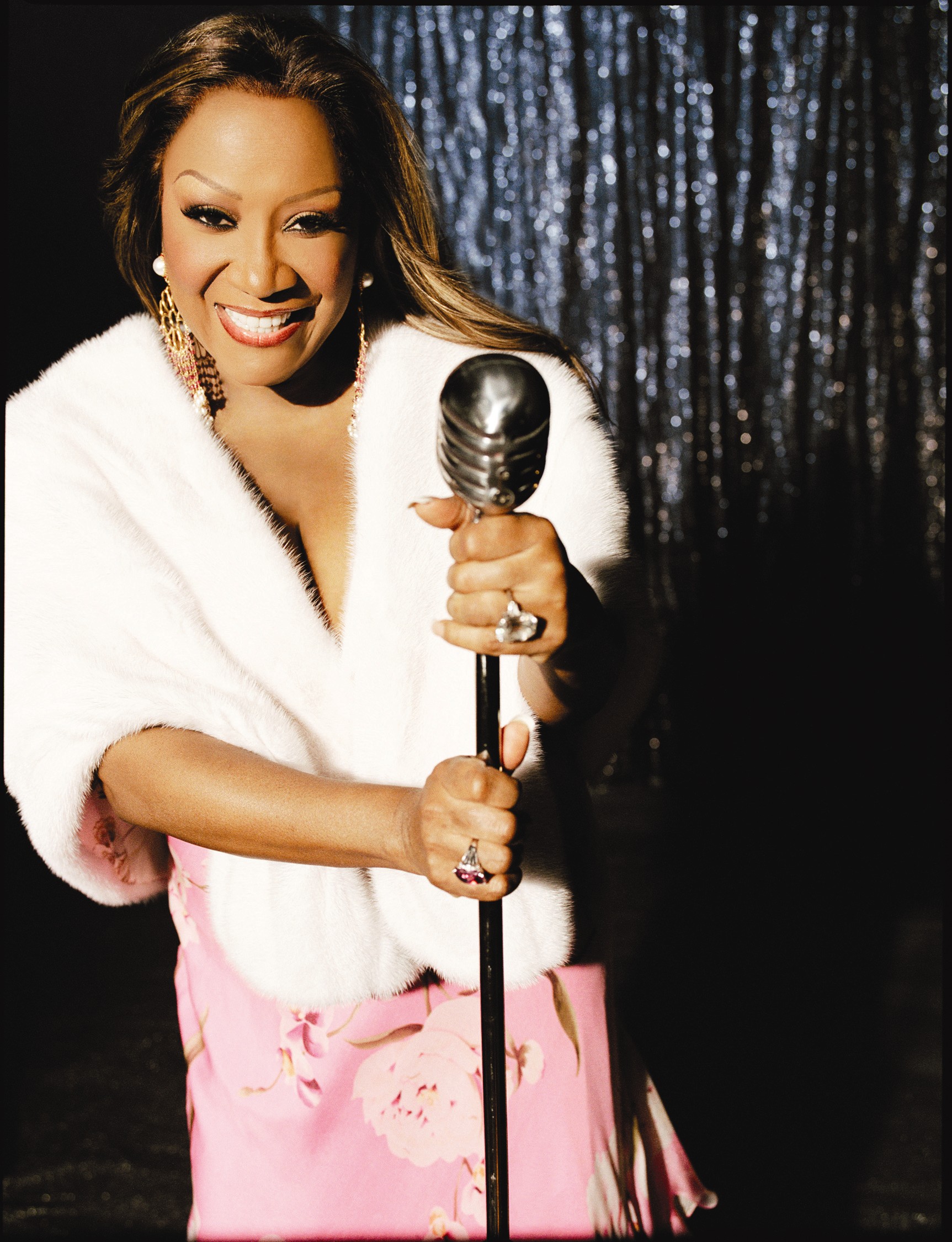 “I still have so much more to do, so many other things to try. I have a lot of blessings, a lot to be thankful for…but I’m always excited about what else there is for me to do.”

It’s hard to believe that such words could fall from the lips of one of contemporary music’s living legend. But Patti LaBelle, soulful diva extraordinaire isn’t playing when she says that. Even with all of her many accolades, awards and accomplishments, she is constantly challenging herself creatively and artistically. Such is proven on her first release of the 21st century, When A Woman Loves. Unlike the nearly 30 albums she’s recorded in various incarnations (in the ‘60s as leader of Patti LaBelle & The Bluebelles; in the ‘70s with Labelle and since 1977, as a soloist), her ninth album for MCA Records is composed of tunes almost entirely penned by one songwriter – Diane Warren.

As the industry knows, Diane Warren is not just any writer. With her multiple Grammy awards and stellar track record for writing hits like Celine Dion’s “Because You Loved Me,” Toni Braxton’s “Unbreak My Heart” and Aerosmith’s “I Don’t Want To Miss A Thing,” Warren is recognized as one with the magic touch. On When A Woman Loves, Warren cherry-picked all of the songs with Patti, writing all but two, “I’ll Still Love You More,” originally recorded by Trisha Yearwood in 1998 and “Love Will Lead You Back,” cut by Taylor Dayne in 1989. It goes without saying that Patti puts her own distinctive stamp on both songs, which emerge as two standouts on an album filled with some of the best music that Patti has recorded in her illustrious four-decade-long career. “I wanted to do an album of Diane’s songs because I love what she writes,” explains Patti. “I would hear the hits she had with other singers like Celine or Toni and I would say ‘I should have had that one!’ I knew what I would get from her if we worked together – great songs, great lyrics. We already knew each other from when I recorded “If You Asked Me To” (a Warren song that Patti originally cut in 1989 as for the James Bond movie, “License To Kill”) so that made it much easier. The whole concept behind the album was to sing songs from a woman’s point of view.

Adding even more luster to a project clearly tailor-made for Patti’s always potent, emotionally real musical persona, was the participation of super hit makers Jimmy Jam and Terry Lewis who have also worked with Patti on previous albums, most notable her last two MCA albums, Flame (1996) and Gems (1994). The Minneapolis team produced most of the tracks on When A Woman Loves. “Working with Jimmy and Terry is always easy and fun,” says Patti, who adds that the combination of Warren-penned songs and Jam & Lewis-produced tracks created a consistency that meant everything weaved together musically.” Other producers included Warren, Randy Jackson and Hex Hector.

In her usual candid manner, Patti also says that some of the songs coincidentally mirrored circumstances in her own life. “At the time that I was recording the album, I was going through a separation. So, people may think Diane wrote the songs about that. But she didn’t know…it just so happened that some of the songs like “Call Me Gone,” “Love Will Lead You Back” and “Time Will” could apply to whatever I was going through. But we never sat down and discussed it. Diane just knows how to write my way and just like me, she doesn’t hold anything back musically.”

Patti’s powerhouse vocal delivery and Warren’s lyric honesty are in full effect throughout When A Woman Loves. The title cut is an instantly memorable ballad that provides the emotional glue for the entire album; while “Make Tonight Beautiful” is a sensual slow jam that Patti describes playfully as “kinda sexy.” Packed with Patti’s soaring vocals, “Too Many Tears” and “Time Will” are high energy dance floor standouts that Patti notes “we turned from original ballads into house music grooves. I was afraid of how Diane would react when she heard them. But she loved what we did!”

“Call Me Gone,” the album’s funkiest cut, is an insistent in-your-face R&B highlight. “Hey, when it’s over, it’s over,” says Patti. “That doesn’t mean a separation has to be negative. Sometimes a breakup can allow the two people involved to get to know each other better as friends.”

In contrast, the poignant “Love Will Lead You Back” – which Patti delivers with heartfelt authenticity – offers the possibility “that the door may still be open…you just never know,” she says.

What adoring fans, her peers and the worldwide media do know is that Patti LaBelle has been giving her all through her recordings and onstage performances since 1961 when she led The Bluebelles to a million-selling hit with “I Sold My Heart To The Junkman.” Since then, the Philadelphia native has been a chart staple through a half-a-dozen hits with the futuristic trio Labelle and later a stunning solo artist with over thirty charted singles including 1983’s chart topper “If Only You Knew,” the 1985 smash “New Attitude,” a pop and R&B number one single “On My Own,” which was a 1986 duet with Michael McDonald, and more recent hits like “Somebody Loves You Baby,” “When You’ve Been Blessed,” “The Right Kind Of Lover” and “When You Talk About Love.”

Her nine albums for MCA have included 1986 platinum-selling Winner In You and three gold albums Burnin’, Gems and Flame. Other notables are the best-selling Live! set (CD and home video) and another set, Live! One Night Only, recorded in 1998 at the Hammerstein Ballroom in New York City on the heels of a record-breaking two-week concert run on Broadway.

Patti is the author of two best-selling books – autobiography Don’t Block The Blessings and the 1999 cookbook, LaBelle Cuisine: Recipes to Sing About and starred in her own prime-time television specials and weekly television series, “Out All Night.”

Her high-octane concerts draw constant standing-room-only crowds even, she notes, “when I don’t have a record on the charts! I guess when people come to see me they know they’re going to get 150%. It’s been that way ever since I stepped out onstage for the first time.”

In addition to her amazing career, Patti’s work as a humanitarian is legendary. A diabetic herself, Patti has served as a spokesperson for the American Diabetic Association. She has a foundation called The Patti LaBelle Medical Education Scholarship Fund that is administered through the National Medical Association.

She also served as the spokesperson for the National Minority AIDS Council’s “Live Long Sugar” campaign; and the National Cancer Institute. Having lost several members of her family to cancer, Patti’s tireless efforts resulted in the dedication of a special research laboratory in her honor at the Sylvestri Comprehensive Care Center at the University of Miami.

A mother of three sons, and with two children of her late sister Jackie, Patti’s life has been filled with triumph and challenges, both personal and professional. And through it all, she has emerged as a household name whose realness has ensured her a place in the hearts of music lovers year in and year out. “I feel very proud,” she says of her status as one of the world’s most beloved musical divas.

That pride is never more evident than when Patti LaBelle speaks of When A Woman Loves, of which she laughs, “just could be the monster album I’ve been waiting for!” Whether she’s singing full out on the ‘soft love’ ballad “If I Was A River” or telling it like it is on the soaring “I’ll Still Love You More,” Patti LaBelle delivers as only she can – pure heart and soul.