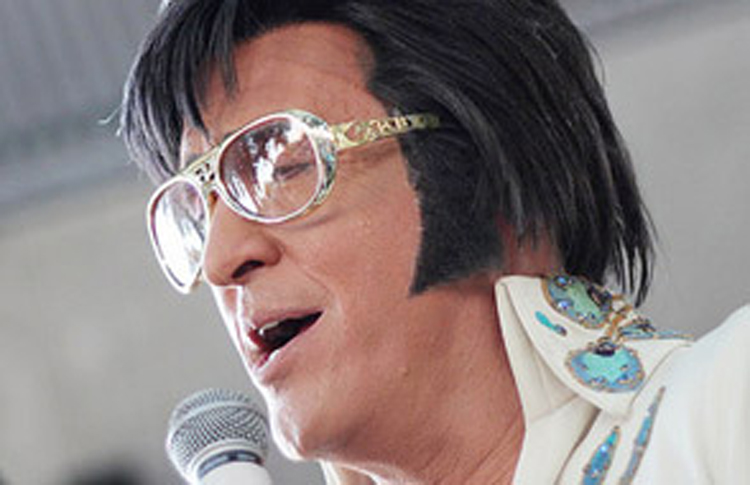 When Raymond Michael was a freshman operatic voice major and football player at California Lutheran University in Thousand Oaks , CA , he was asked to represent the football team on a panel when a hypnotist show came on campus. The hypnotist asked Michael to perform as Elvis. He did, received a standing ovation. He has been performing as him ever since. In fact, Michael has just returned from a successful tour commemorating the 25th anniversary of the death of Elvis Presley.

Michael has performed for ten summers at Knott’s Berry Farm, five summers at Six Flags Over Texas, at five other Six Flags Parks, in main showrooms in Las Vegas, Lake Tahoe and Reno, on national network, international and cable television shows, and in major concert tours of the United States, Canada and the world. He was featured in the “Where’s Your Moustache?” milk print advertisement. Just last winter he served as technical advisor and performer for a national Blockbuster Video television commercial featuring the likeness of Elvis.

Michael also performs in numerous corporate shows, has had his own, hour long, national cable television special, and has been featured in several MTV music videos. Dick Clark, “Granddaddy of Rock ‘n’ Roll,” selected Michael as one of the best Elvis tribute acts in the world. Michael’s Tribute to the King of Rock ‘n’ Roll is also a hit at numerous city concerts and county & state fairs. He owns over thirty jumpsuits that are exact replicas of Elvis Presley’s. Most of them made by Gene Doucette, the man who designed all of Elvis’ jumpsuits. In addition to his act, Michael also does a great tribute to Tom Jones, which is part of his Casino Superstars Show.

When not performing as Elvis, Michael teaches chorus and musical show production at Moorpark High School. Recently he was honored with NBC 4 Television’s Crystal Apple Award for Teaching Excellence. And, when time permits, Michael will take to the stage as the lead in a musical or opera. Raymond Michael lives in Moorpark with his wife, Pam, and his three sons: Raymond, Jr. (15), Joseph (3) and Jonathan (2 months).

Long recognized as one of the best Elvis tribute acts around, Michael continues to perform in a variety of venues – from local, city concerts to national television. Raymond Michael plans to continue to keep the memory of Elvis alive by doing his upbeat, classy and entertaining Tribute to the King of Rock & Roll for years to come.