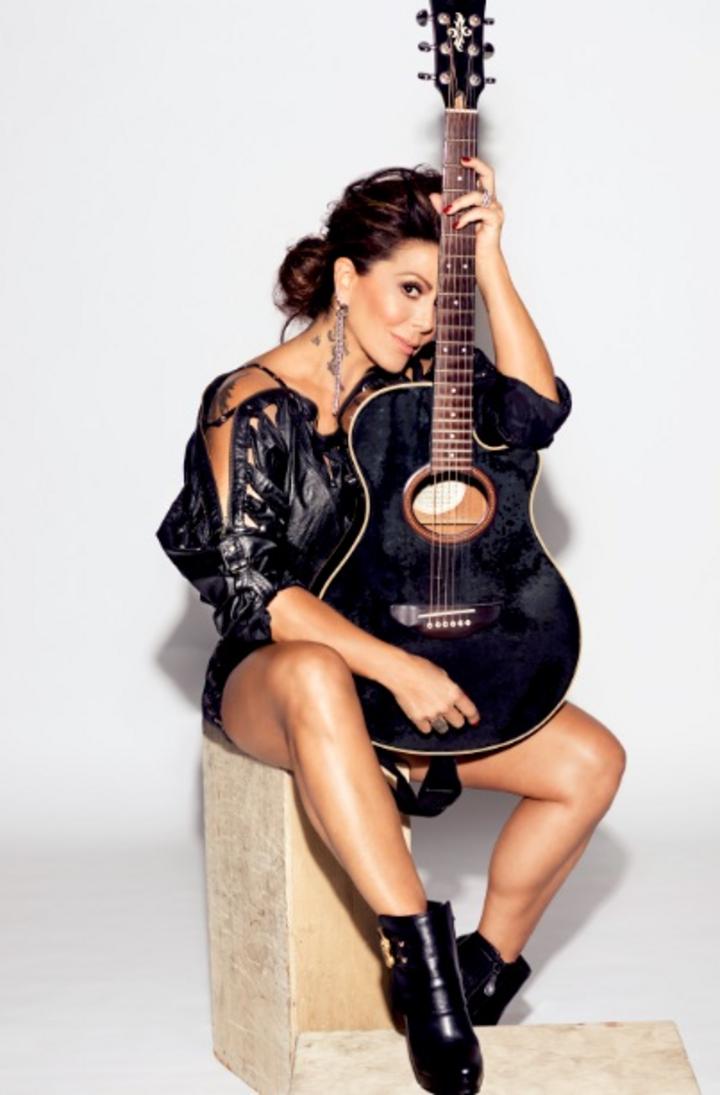 Alejandra Guzmán was born under the sign of Aquarius, on February 9th in Mexico City. Heiress of two legends, Silvia Pinal and Enrique Guzman, the well-known “Queen of Rock”, at the age of two months, made her “debut” in the TV show “Silvia y Enrique,” starring her parents.

Since the age of five, she began taking classes in ballet, tap and jazz, which has allowed her to develop an aesthetic body and a strong discipline. With the concern of art in her veins, since she was small she improvised “shows”, having her brothers as audience, clearly demonstrating that art was everything to her.

Combining it with her studies, she began to venture into the artistic world doing TV commercials and appearing in soap operas and TV shows like “Mujer Casos de la Vida Real”. She also did vocals for Kenny y los Eléctricos and La Union.

Later, without abandoning school, the only condition imposed by their parents, she took part in the musical comedy “Mame”, produced by Silvia Pinal, amply demonstrating that she was born for the artistic career. Once she finished high school, she decided to devote herself to what attracted her most: SINGING.

Despite her parents’ fame, the road to achieve her goals was not easy. She knocked a lot of doors asking for an opportunity, which did not arrive; but far from giving up, she continued fighting until Miguel Blasco crossed into her way. He believed in her and, at the end of 1988, he produced her first album titled “Bye Mamá”, which was released in 1989 … And all that energy, all that charisma, all that talent that Alejandra Guzmán develops, brought a positive outcome. Success began to smile her, becoming in a very short time the favorite singer for the public of all ages.

With songs like “Bye Mamá” and “La Plaga”, among others, she got to the top radio and sales charts throughout the entire country. Following her first success with all the awards and recognitions like being named “The Revolution of the Year”, she released the album “Dame tu Amor”, which gave continuity to the success of the previous production.

In 1990 she recorded “Eternamente Bella”, achieving a much greater success than the former album. She began an extensive tour in the Arena Mexico with 17,000 people, to continue throughout the entire Mexican Republic, United States, and Central and South America, gaining public recognition as “The Singer of the Year” and standing as the most loved and admired artist.

The same year she debuted in the Film Industry with the movie “Verano Peligroso”, beating all box office records from those times and appearing, in parallel, again with very high sales of the soundtrack, under the same title.

“Flor de Papel” was in 1991 the fourth Alejandra Guzmán’s album, which she continued her upward career that was interrupted to perform her best role: being a mother.

Very professional, she worked until the fifth month of pregnancy, with a concert at the Mexican National Auditorium. In March 1992 Frida Sofia was born, who came to accentuate Alejandra’s already burgeoning maturity, reappearing with all her magnificency as a woman in the TV show “Iberoamerica Va”, in which she premiered the theme “Te esperaba”, which was written for her when she was waiting for her little baby.

1993 marks a new cycle in the life of the charismatic artist: she signed a contract with BMG Entertainment. All that maturity as a singer and a woman was reflected in “Libre”, a new production from Miguel Blasco, which showed an Alejandra in the fullness of her vocal powers, achieving a more extensive vocal range.

“Libre” was released not only in our country but also in United States, Argentina, Chile, Colombia, Costa Rica, Venezuela, Peru, Uruguay, Ecuador, Bolivia and Spain.

During June and July 1994, Alejandra Guzman’s career takes new and more ambitious horizons towards the recording of her sixth album: “Enorme” … With a great voice and maturity in every way, Alejandra achieved again big hits and “enormous” sales.

In 1997 she recorded “La Guzmán”, a collection album, because it is a live concert performed at Xcaret … Alejandra was accompanied by amazing musicians of international talent and a great team assembled by the producer Oscar López. “La Guzmán” was an amazingly emotional and spontaneous album, with 13 of her greatest hits in acoustic versions and three unreleased tracks.

In 1999 she released the album “Algo Natural”, which shows a consolidated artist in every sense of the word, and the maximum exponent of the female pop-rock, first Latin able to open the door to this genre, for others the second her. Recorded in one of the best equipped studios in Miami, Florida, with the best musicians worldwide, “Algo Natural” was directed and produced by Juan Carlos Calderón y Oscar López.

2001 marked a new benchmark in the career of Alejandra Guzman, as her album “SOY” was produced in its entirety by Desmond Child, a genius in the rock. With songs like “De Verdad”, “Diablo” and “Volveré a Amar”, she reached the top of popularity and reaffirmed as the great artist that she is, who is simply unrepeatable. With this album she won the Grammy Award in the category “Best Latin Rock Artist”.

In 2004 Alejandra Guzmán returned absolutely avant-garde through “Lipstick”, her new album where she worked again with Desmond Child, producer, composer and musician, who’s creations have reached No.1 on Billboard on 30 different occasions, giving great success to artists like Cher, Bon Jovi, Aerosmith, Alice Cooper, Michael Bolton, Kiss and Ricky Martin, among others.

The first single “Lipstick” has suggestive lyrics, which in Alejandra’s voice becomes an irresistible dose of musical energy. This album features tracks written by Desmond Child, Beto Cuevas (La Ley) and Alejandra Guzmán, as well as an English version of the song “Lipstick.”

With each of these productions, Alejandra Guzmán has received several Gold and Platinum status albums, in addition to bringing her music to all Spanish-speaking countries and United States, always reaching the top positions on radio. As to his facet as an actress, she has participated in various TV shows, as well as theater plays with great success, like “Mame” and “Gypsy.”

In 2005, Alejandra Guzmán began searching songs for her next album, writing herself some of them. She will surprise us with a new style pop rock that defines perfectly the personality of this Mexican artist.

2006 begins with the return of the rock’s diva, with the album “Indeleble” and the first single “Volverte a Amar”, written by Alejandra Guzmán and the talented composer Mario Domm.

The album “Indeleble” was recorded in Italy, with the renowned producer Loris Ceroni, who immediately felt the energy of Alejandra’s passionate temper, and succeeded in putting into each song an impressive sound.

Only a week and a half after its release, “Indeleble” achieved Golden status for more than 50,000 copies sold and, less than two months later, it became Platinum for more than 100,000 copies sold in Mexico . “Volverte a Amar”, the first single, was in the first place of radio charts for several weeks, and the second single “Quiero estar contigo” is climbing positions in the radio charts of the country.

Alejandra Guzmán is an artist of undeniable and unforgettable talent… absolutely unique and highly creative, which allows her to be in constant renewal, and that also made her to change her Record Label and sign at the beginning of September a contract with EMI Music, with the goal to expand her music to all of the Americas and Europe. Almost immediately after the signing of the contract, she began in Bologna Italy the recording of “FUERZA”, produced by Loris Ceroni and co-produced by the Alejandra Guzmán; this duo has created real hits in the past. The album received platinum certification for its sales.

2009’s UNICO was recorded in London and was Alejandra’s 15th album and her second with record Label EMI music.

In 2011, Mexico’s Queen “Queen of Rock” Alejandra Guzmán is back with an explosive greatest hits album; a live record compiling exclusive new versions of her best repertoire. Alejandra joined forces with Mexican glam rock group Moderatto to give new life to every song matching them to their particular modern style and power; all this material was recorded live at the famous Palacio De Los Deportes in Mexico City and featured extraordinary musical cameos by Puerto Rico’s father of hip hop, Vico C and Jenni Rivera, the reigning queen of the Regional Mexican genre.

The album also includes the studio version of Alejandra’s latest hit, “Día de Suerte”, which recently topped the radio charts in Mexico and is featured as the theme song for Televisa’s new primetime soap opera “Una Familia con Suerte”, series that will air in the US in the second semester of 2011. The single is quickly climbing the charts in the US with early airplay coming from major markets like Los Angeles, Dallas, Houston, San Diego, Sacramento, San Antonio, McAllen, El Paso, Bakersfield and Santa Rosa, CA.

This Album release will be followed by a tour throughout Mexico, the United States and Central America that will recreate the unique collaboration between Alejandra Guzman and Moderatto. Dates in the US begin in the fall.