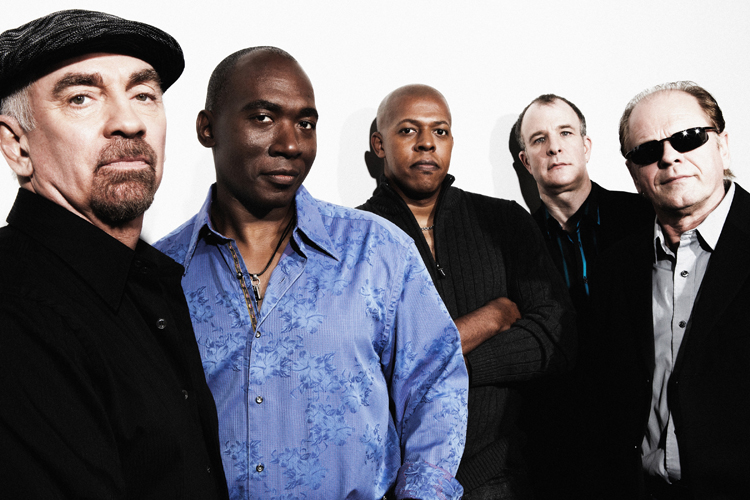 After many years of aging, a fine single malt Scotch begins to achieve a mellow perfection, it’s golden glow tempting us to try a sip. However, the fire that lies below that smoothness can be enough to knock one’s head back! And so it has been with one of Scotland’s other contributions to the world, the Average White Band. After 25 years, AWB has matured into a finely-tuned unit which never allowed their “fire” to burn out.

AWB’s unique sound leaves no doubt that they are the “Real Deal”, the funkiest, most soulful group of white guys to ever put down the sound.

And the sound is “genuine, straight-to-the-core R&B, with a lot of funk elements and a great deal of soul attitude” says Alan Gorrie, who with Glasgow guitarist Onnie McIntyre founded the band in London in late 1971. Joining them were Malcolm “Molly” Duncan and Roger Ball on horns (Gorrie’s friends from Dundee Art college) who had been playing together in various campus jazz bands at the same time young drummer Robbie McIntosh was making a name for himself around town. McIntosh then rejoined his old pals in London, via Brian Auger’s Oblivion Express, and finally Glasgow’s Hamish Stuart was recruited, his falsetto vocals complementing Alan’s tenor, and his writing skills, guitar lines and bass adding so much to the line-up.

Thus, this band of Scots who “all heard the same soulful things in their heads” left their jobs in cover bands to pursue artistic freedom. “We wanted to be The Spinners, but play instruments at the same time” co-founder Alan Gorrie recalls. But why were six tweedy Scotsmen so intent on writing and performing African American music? Gorrie explains that the appeal was the compulsive beat.

“Scottish people like to dance. But it wasn’t just the dancing. Celtic people are very passionate, very heart-driven….very soulful. It was the sound and the vocal commitment of black American music which struck a chord.” Thus, American soul was the most popular sound of the 60′s in Scotland. Says Gorrie, “If you went to a dance club or anything, that’s all you heard: Stax, Tamla, Motown, Atlantic records. Nothing else was acceptable.” A steady diet of the Isley Brothers, Marvin Gaye, James Brown, Curtis Mayfield and Ben E. King, mixed with a love of jazz artists such as Cannonball Adderley, Herbie Hancock and Wes Montgomery influenced the music these young men made. Legions of music lovers of all races enthusiastically embraced it.

A string of successful recordings resulted, beginning with the break-out hit “Pick Up The Pieces”, which reached #1 on the Pop charts in America and was later nominated for a Grammy. “Person To Person”, “Cut the Cake”, “Schoolboy Crush”, “If I Ever Lose This Heaven”, “Cloudy”, “Queen of My Soul”, and “Let’s Go ‘Round Again” became some of the band’s most well-known tunes from their mid-late ’70′s heyday. However, as “Pick Up The Pieces” climbed the charts, tragedy struck. Drummer Robbie McIntosh was accidently poisoned at a Hollywood Hills party when he was spiked with a lethal amount of heroin, and he died at age 24. This event could have caused the premature end of AWB, until the despairing band were joined by Steve Ferrone, an old friend who had replaced Robbie in Oblivion Express. His presence helped get the band back on the road and into the studio to record the Cut The Cake album, which they dedicated to Robbie.

Steve’s being a black Brit added further irony to the name “Average White Band”, which was coined by a friend whose travels with the British Diplomatic Service caused him to make remarks such as, “Uganda is just too hot for the average white man.” Alan Gorrie relates, “We couldn’t think of a better name, and that one struck us as a bit of a tongue in cheek joke, because we were anything but an average white band.” The famous AWB logo (with a woman’s backside forming the “W”) began as a doodle of Gorrie’s, and was enhanced for the famous album cover by Tim Bruckner into the black and white design they’ve used ever since.

As late ’70′s disco-mania and then 80′s punk overtook the music scene, the original AWB unit found itself swimming against strong tides. After a final release in 1982, each member began working on his own or with other bands. Hamish toured and recorded with Paul McCartney for several years, and has appeared with David Sanborn. Alan released a solo project, Sleepless Nights, in 1985, and recorded and toured with Daryl Hall, among others. Onnie did some studio work, and Steve went on to accompany such greats as Eric Clapton and, most recently, Tom Petty. Molly moved to Majorca and gigs there recreationally, as well as doing occasional UK section dates. Roger temporarily resumed his career as an architect.

After a 5 year hiatus, Gorrie, McIntyre, and Ball revived the band to record the LP Aftershock. It was an incomplete AWB, but Alan’s discovery and inclusion of young vocalist/multi-instrumentalist Eliot Lewis contributed greatly to the piece, and he co-wrote and produced the single “Spirit of Love” for the group. He has shared the spotlight ever since. Eventually, drummer Pete Abbott joined them, and before long, things really started to gel. “We had to wait to get the qualitative equivalent of the old band back together, albeit with some new members” says Alan.

The long awaited Soul Tattoo LP proved that patience pays off. Says Alan, “We needed to have a cohesive unit that was experienced and familiar enough with each other, and had written enough material to make what I would say is a real worthwhile AWB album.” Critics and fans agree with his assessment.

After recording Soul Tattoo, Roger Ball decided to retire from life on the road. To replace him, Pete and Eliot recommended Fred “Freddy V” Vigdor, who had already played in the horn section on Soul Tattoo (listen for his tasty alto sax at the end of “Every Beat of My Heart”!) The New York-based quintet now tours about three-quarters of the year, winning acclaim and new fans the world over. At present the current single is the aforementioned “Every Beat…”, another new album is in the planning stages, and the tours continue. Fans new and old can thank their lucky stars that they can once again “get down” to the funky grooves of the unmistakable, unparalleled Average White Band.

In the ’90′s, AWB’s timeless grooves have been sampled by some of the biggest names in the hip-hop, rap, and acid jazz worlds, confirming without a doubt the strong impression the band has made on a new generation. Young bands such as Jamiroquai and Brand New Heavies cite AWB as a major influence. Producer/performer Sean “Puff Daddy” Combs sampled “Person To Person” on the cut “Friend” from his latest release, No Way Out. Janet Jackson used “School Boy Crush” on her song “The New Agenda,” as did TLC for their hit “Ain’t 2 Proud 2 Beg”. Louise, former lead singer of the U.K. soul/pop outfit “Eternal”, just released her cover of “Let’s Go ‘Round Again”. Bobby Brown, A Tribe Called Quest, Public Enemy, Lil’ Kim and Leena Conquest are just a few of the over seventy artists who have sampled music from the Average White Band’s vast catalog.

A Taste of Honey
Scroll to top