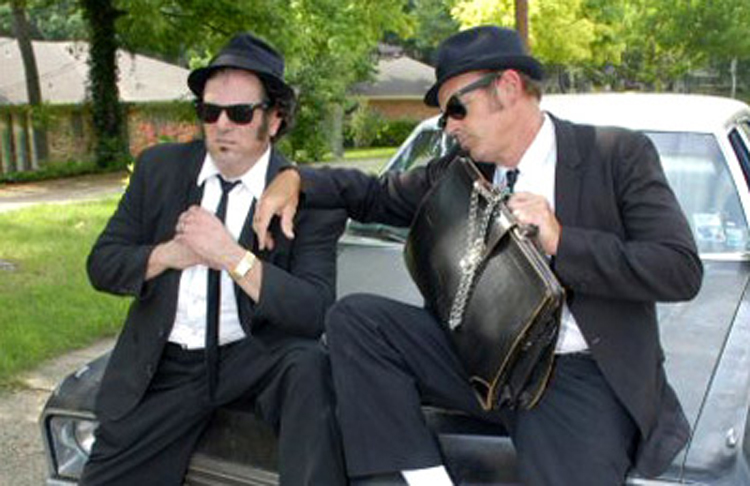 Often referred to as a “tribute band,” BRIEFCASE BLUES™ is much more than just a band. It is an authentic, seasoned, soul / rock & roll / rhythm & blues outfit that reproduces the “Blues Brothers” concert-show as originally created for the stage by Saturday Night Live comedians Dan Aykroyd and John Belushi.

From their first appearance in September of 1983 (only a year after John’s untimely passing), Briefcase Blues has endured for a record 28 years by essaying the best of the “Blues Brothers” tunes and other carefully selected songs. Combined with the music, delivered by a consistently professional 7 to 8 piece band, Briefcase Blues has been fronted for over 2-1/2 decades by the lead performances of vocalist J. Leggio (as “Joliet Jake Blues”) and vocalist-harmonica player Lee Schwing (as “Elwood Blues”). In terms of sheer lineage, Briefcase Blues precedes any other show in the known entertainment world portraying “Jake and Elwood” – tribute band or not – by years, if not decades, of duration.

Rather than create a parody or variation of the original “Jake and Elwood” characters, Leggio and Schwing have worked over the years to stick to the characterizations and vocal / musical stylings that Aykroyd and Belushi originally used to make the two “brothers in the blues” come to life. Leggio keeps his vocals raw, snarling and true to Belushi’s Chicago-born sound; Schwing keeps his feet moving, his attitude reticent and his blues harps pushing out wailing notes through the mic…all backed by a powerful band and horn section.

The show has not only performed in many different and “exotic” locales outside its home base in Dallas, Texas (East Los Angeles, Washington D.C., Acapulco Bay, Alberta Canada and U.S. Air Force Bases in Japan to name only five), but also boasts a lineage of first-rate musicians. Some ranks of past (and present) sidemen have included members of The Stan Kenton Orchestra (Curtis Fox), the legendary “Hollywood Horns” (Alan Beutler) and the Edgar Winter Group (Rick Latham).

The current band-lineup is still Dallas-based, but frequently calls upon highly-pedigreed sidemen from either coast, and anywhere in between.

As a parting word on Briefcase Blues as a “tribute band”; original “Blues Brothers” music director Paul Shaffer is quoted thus in his book ”We’ll Be Here For The Rest Of Our Lives” (Doubleday / Flying Dolphin Press, New York. © 2008):

“We (the Blues Brothers) were a tribute band. Together we played the music with unrestrained joy and sincerity. We loved the music. John wasn’t a great singer-and he knew it. John was a good singer. Danny was a good harp player. They revered blues and R&B and, most importantly … helped keep this stuff alive.”

If the ORIGINAL “Blues Brothers” were, as Paul Shaffer described, “a tribute band” – then Briefcase Blues is indeed a “tribute band” in the finest sense of the the term.