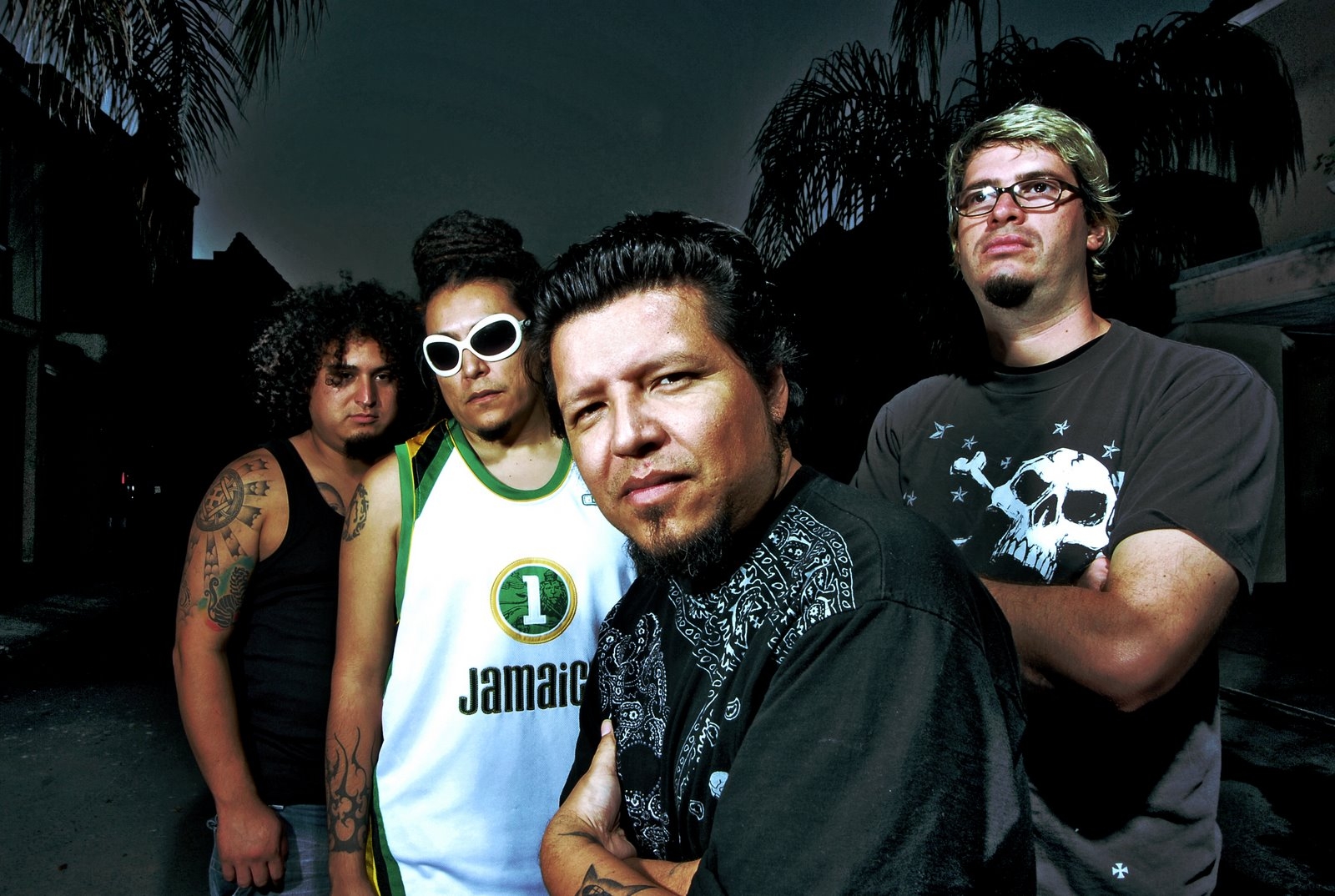 Sometimes the best way to make world” music is to start in your own backyard. Few Latin alternative bands express that idea better than El Gran Silencio, which hails from Monterrey, Mexico, but whose vision extends to Spain, India, and beyond. From deep roots in the alternative scene of a town that has been called the Seattle of Latin alternative, El Gran Silencio have traveled a musical path that meanders through rock, hiphop, norteño, cumbia, pagode, ragamuffin, rumba flamenco, and even raga.

Originally slated to release as a two-album set, Super Riddim Internacional, Vol. 1, is a monumental new work by El Gran Silencio (Volume II will be released in the fall.) The band–which consists of brothers Tony and Cano Hernandez on vocals and guitars, Isaac Valdez on accordion, and Ezequiel Alvarado on drums has reached dizzying new heights of creativity and rhythmic energy. Like EGS’s previous albums, Libres y Locos and Chuntaro Radio Poder, Super Riddim Internacional is the soundtrack to an imaginary world where Mexican breakdancers chill to a new kind of international folkloric lounge music. It’s music that would feel equally at home in Los Angeles as Barcelona, and maybe even Morocco or New Dehli.

El Gran Silencio was founded in the summer of 1992 after Tony and Cano Hernandez had been playing in various rock bands and wanted to find a way to combine their love for hiphop and norteño music. In the early 80s they had been exposed to early hiphop by Afrika Bambaata and Soul Sonic force and even obscure electrofunk artists like Egyptian Lover. But the momentum of a renaissance of Mexican rock began to sweep the country in the late 80s through groups like Caifanes, Maldita Vecindad, and Maná. The brothers Hernández formed EGS in the midst of a new Monterrey wave that included bands like Control Machete and Plastilina Mosh, and more recently Kinky, Jumbo, and Zurdok.

But despite the emergence of Monterrey as the it city for Mexican rock, El Gran Silencio would rather hang out in their own barrio in the city’s northern suburbs. Going back to see our homies is a way of grounding ourselves when we’re flying too high, said Tony Hernández. It makes us write about them, and their experiences and we try to take things that can be told in all parts of the world.

EGS’s method of making the particular experiences of their hometown universal is also something they apply to the way they make music. Enduring criticism from local rock purists, they pursued their interest in the cumbia root of norteño all the way to its home country of Colombia. We found that there are many styles in Colombian music besides cumbia. In the new record we do a little Colombian merengue, puya, porro and paseo, said Hernández.

But the story of EGS’s heady and completely original tropical-rock mix doesn’t end there. When they began touring Europe in the late 90s, they came into contact with groups like Dusminguet, Macaco, and Peret, who were creating their own fusion, which some call rumba flamenco. We saw so many musicians playing so many different styles, it influenced me to get into other rhythms, said Hernández.

The result is the kind of music that El Gran Silencio plays today wildly varied yet coherent, speaking to the whole world from the heart of their barrio in Monterrey. The highly charged ragamuffin of Super Riddim Internacional, the album’s first single, flows naturally with more introspective songs like Recordar es Vivir and El Espejo.

‘Recordar es Vivir’ is based on something my father used to say about how people’s deeds are remembered more than just who they were, said Hernandez. I wrote El Espejo’ after taking a bath and looking in a mirror, and thought about how the years were going by. The mirror told me the truth about what I had done in my life.

As students of international music, El Gran Silencio strives to reproduce what they’ve learned with authenticity. On the new album, you can hear instruments like the African yambe and chekere, the Colombian guacharaca, and even the Middle Eastern darbuka. But there are also frequent appearances by DJ Macojazz, Tony Hernández’s alter ego, inserting the kind of triphop-influenced looping of folklore and funk that make EGS’s sound as electric as it is authentic.

El Gran Silencio’s mix of norteño, hiphop, rock, and worldbeat makes them seem a little exotic, so it’s easy to forget that their Monterrey perspective is very much like Tijuana’s. Living in a major city close to the U.S. border makes them more America-centric than you’d think. Bits of English and Spanglish flow through their songs, particularly those with a ragamuffin or dancehall bent. We get to see the Hollywood movies first, we eat hamburgers and watch Bart Simpson, said Hernández. When someone doesn’t speak Spanish but likes our music, we’re very interested in knowing why. Also, the hiphop element in our songs relates to people in the U.S. We’re not one of those groups that say that Mexicans or Latinos are the baddest, and we don’t want to know about anyone else.

Super Riddim Internacional is a joyous hybrid of sensuous beats, urban sarcasm, and earnest self-reflection. It can send you into a fit of breakdancing, or it can be music to watch the sun set by, blurring the lines between raucous guitars, wailing accordions and a South Asian backbeat. It’s the ultimate statement from a band that wants to make the world its own personal moshpit.