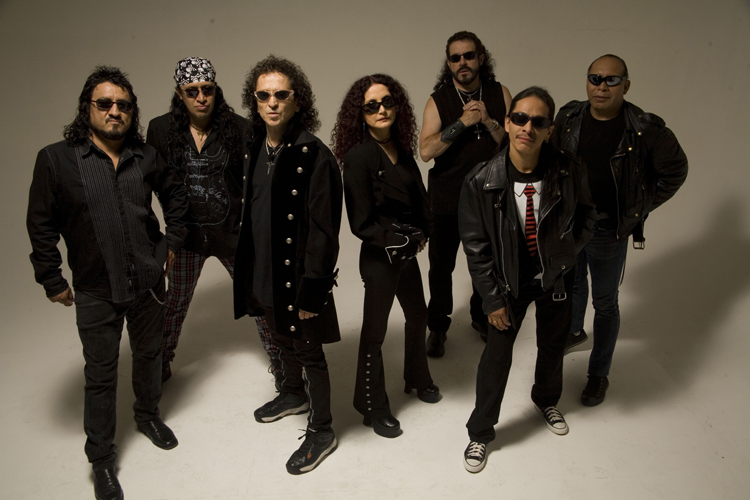 Recognized by its admirers as “a true hero of the Mexican national rock scene,” Alex Lora also proves to be a character with an excellent sense of humor. He assures us that, outside of rock and roll, there has been no other dominant passion in his life.

“We made our debut during the 1968 Olympic games, that were organized in my native Mexico, and since then, I think, we have continued to be relevant. We have never let our public down, we have continued working, and we have stayed faithful to our principles. We know we are not “new minted coins,” as we say in Mexico. Those who like our music and our rocking are the most important things to us.

It is not easy for any rock group to stay up to date and still be popular after three decades of constant activity. In addition to the Rolling Stones, the only other group that has managed to fulfill such an incredible feat is “El Tri” and Alex Lora considers that this had not been possible without the support of its followers.

“Our music is one that, in spite of not having received a suitable advertising promotion at any time in our history, has remained alive in the heart of “la raza,” our people, and not just for a little while but for the good part of three decades and a half. This makes the phenomenon of our band to be quite peculiar. What it means is that the music of “El Tri” does not depend on any p&a campaign to be able to survive and remain popular. We have never been on the radio. We never had strong support in the mass media. It is “la raza,” our people, who has helped us, with their mouth-to-mouth promotion of the message and the songs of “El Tri.” Our music has shown to be, by itself, worthwhile. “El Tri” is not a product made by some crummy record label. The support of la raza is the only thing that has sustained us over so many years, and we have become an indelible part of their lives. Thanks to the young kids that now listen to our music, we have been able to continue rocking. And that is what we are going to celebrate here in Los Angeles. Because without the support of anyone else besides our public- not even one of these freaking idiots at the record company where we are now -we continue to be as excited and as thrilled as we have ever been about our music, and rock n’ rolling “a toda madre,” with our people.”

With his inseparable guitar by his side, that he usually caresses with all due gentleness, Alex Lora confirmed, full of satisfaction, that it was “El Tri” who introduced, more than a decade ago, the Mexican brand of Rock n’ Roll into the U.S. market.

“We came to do our first gigs at the Blanquita Theater, in East Los Angeles. I remember that at that time we came for only one weekend, to test the waters, and we ended up remaining here for two months. We played Thursday to Sundays, doing two shows, alternating with “Feliz” and “The Katz.” Thanks God, “la raza” always defended our music, whether inside or outside of Mexico. And they never let us down. For example there are songs that I made up more than thirty years ago like “Oye cantinero,” “Nuestros impuestos estan trabajando,” “Que viva el rock and roll,” “Abuso de autoridad,” and that have not disappeared from our repertoire. I think that, thanks to the “chavos,” the kids, those songs are now more popular than at the time when we first sang them, and not just those titles, but it is true with most of our old songs. I’ve gone past being surprised and now I feel that it is something natural, because in these compositions you can see the roots of what makes us “El Tri.” There are new songs that I compose, and they speak about the problems we are facing today, and even though there is such a long time span between that and my new work, the underlying theme continues to be one and the same, the themes that “El Tri” has always sung about, ever since its inception. From the day the band was formed, “El Tri” has sung music of social, political and existential protest. Our music is “la neta,” the real thing. “El Tri” is not into deceiving anybody. The identity of “El Tri” continues to be the same. Although in musical terms we are a little more sophisticated, our message, what we transmit to “la banda” is as direct as it has ever been.”

From One Generation To Another

According to Alex Lora, the musical phenomenon of “El Tri” has not only been transmitted from one generation to another. Their “rocanrolero” message also has been able to cross social and economic barriers, boundaries that are undeniably strict between the different Mexican classes, and they have been able to circulate freely among young listeners regardless of their background, both in Mexico as here, in the United States.

“Our music has traveled from one social layer to the next. And that is something cool, “muy padre.” During a long time the music of “El Tri” was considered to be, in Mexico at least, like a product that could only be consumed by the group of people that suffered the most, meaning those that were the most f-ck’d up by the system, but now there are many nice kids- what we call “fresas” (berry) –that go to the nice and very elegant discos, and that like our music and our songs, even dance to them. This must have happened because some DJ of an “antro popis” (a fancy nightclub) one day decided to spun one of our tracks and then all of a sudden the “pirruris” (nice kids) got all hooked up on it. To this day, when the atmosphere of some nightclub has touched rock bottom, one of our songs can turn all of that around, and that bad atmosphere evaporates right away. And it may be that the kids are completely plastered for the night, but they can relax with our music and they may still listen to our message. The truth is that I feel so happy when I see that “la banda” (the group of fans) that follows us not being the same people that were once our fans. This, to me, only confirms that “El Tri” has been able to continue growing and evolving, and without having to betray itself for the sake of attaining fame. In the concert of November 9th, at the Sports Arena, we are going to demonstrate that after 35 years of Rock n’ Rolling, we are still capable of the same passion and enthusiasm that we had in the 1960s, when we went to play at the Avandaro Festival.”