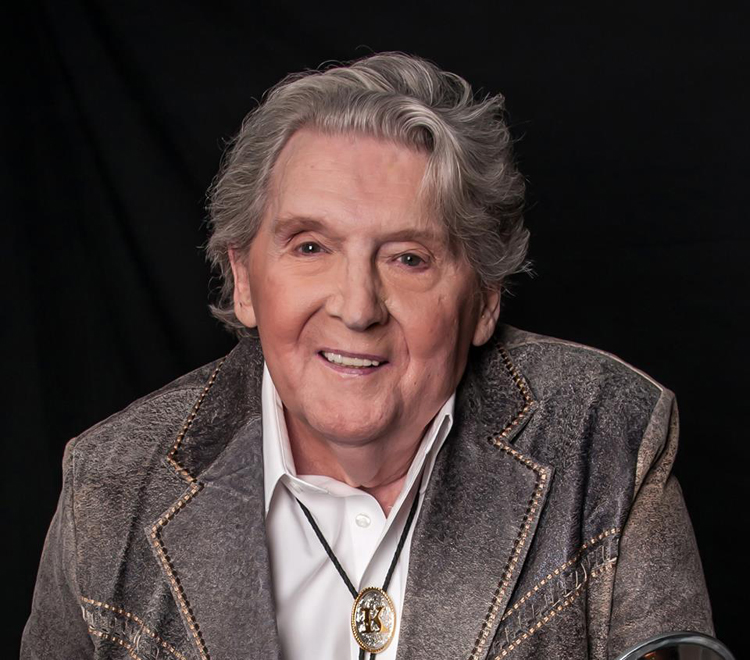 JERRY LEE LEWIS was born on September 29, 1935, in Ferriday, Louisiana. At the age of five, while playing the piano at his aunt’s home, his parents declared that JERRY LEE was born to be a great pianist and later mortgaged their home to buy him a piano of his own. Soon afterwards, JERRY LEE was playing to large crowds at grand openings, civic centers, etc. At the age of l5, he was playing professionally for a travelling revival. He soon fell in love with the preacher’s daughter, Dorothy Barton. They were married, but divorced in just a few months.

By the age of 21, JERRY LEE had remarried and had a son, JERRY LEE LEWIS, JR. (now deceased). The next year, JERRY LEE heard Elvis Presley on the radio and declared to his father that the door had finally been opened to Rock and Roll. JERRY LEE and his father immediately began the task of collecting 30 dozen eggs to finance their trip to Memphis where he hoped to meet with Sam Phillips of Sun Records. When they arrived, they were told that Mr. Phillips was out of town and they should return at a later date. JERRY LEE, however, insisted that they record him so that Mr. Phillips could hear him upon his return. Mr. Phillips did listen, and ultimately signed him to Sun Records, where JERRY LEE went on to record such Rock and Roll hits as WHOLE LOTTA SHAKIN’ GOIN’ ON, GREAT BALLS OF FIRE, YOU WIN AGAIN, HIGH SCHOOL CONFIDENTIAL, BREATHLESS, and many others. In 1958, controversy engulfed JERRY LEE’S career when it was discovered that he had married his thirteen-year old cousin, Myra Gale Brown, daughter of his bass player.

By the late 60′s, JERRY LEE made a huge comeback in the country market, where he produced another string of hits with both Mercury and Elektra records. Songs like WHAT MADE MILWAUKEE FAMOUS, SHE STILL COMES AROUND, and TO MAKE LOVE SWEETER FOR YOU started a long string of hits through the 70′s and 80′s. Additional Top Ten hits such as ONCE MORE WITH FEELING, THERE MUST BE MORE TO LOVE THAN THIS, WOULD YOU TAKE ANOTHER CHANCE ON ME, CHANTILLY LACE, MIDDLE AGE CRAZY, OVER THE RAINBOW, THIRTY-NINE AND HOLDING, and many others have made JERRY LEE an international star.

In 1986, JERRY LEE was unanimously voted the FIRST ARTIST to be inducted into the Rock and Roll Hall of Fame. His life was profiled in 1989 in the motion picture, “Great Balls of Fire”, starring Dennis Quaid, and in 1993 JERRY LEE wrote and published his autobiography, “KILLER”, with author Charles White. In April of 1996, JERRY LEE was given a proclamation by the University of Memphis naming him a Professor of Rock ‘N Roll and April 28th was named JERRY LEE LEWIS Day in Memphis by Tennessee Governor Don Sundquist. JERRY LEE has a new album out on Elektra/Sire titled “Youngblood”, and is currently on his 40th Anniversary Worldwide Tour.