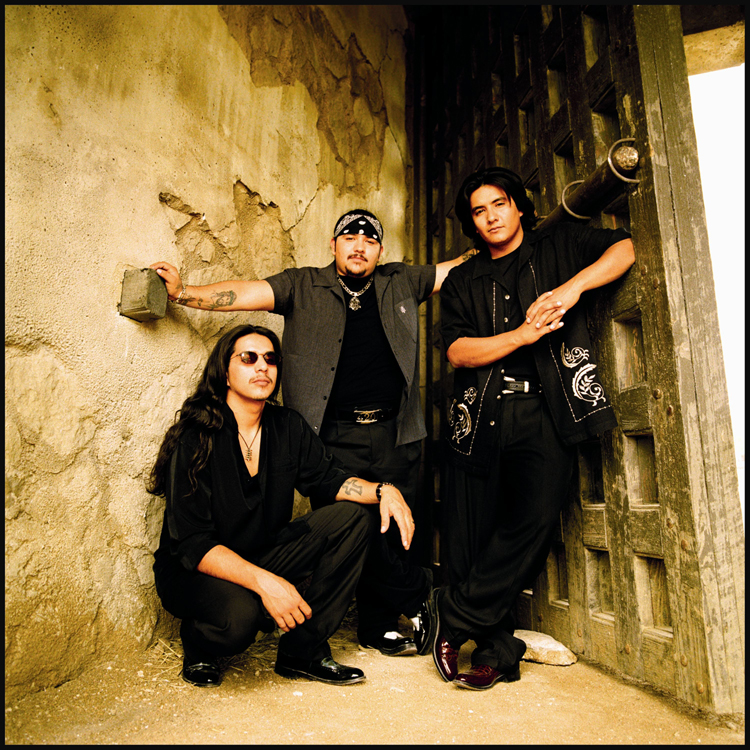 Can anything even more magical happen in the already charmed career of Los Lonely Boys? You bet. It’s called Rockpango, their first self produced long player on their own LonelyTone/Playing In Traffic Records. And yeah, it’s magical indeed.

At least as magical — and maybe more so — as debuting in 2003 with a multi-chart gold single, selling millions of albums, winning a Grammy, racking up reams of critical acclaim, opening for The Rolling Stones, and many more accomplishments for the Texican rock’n’roll trio of brothers. Plus playing and recording with such legends as Willie Nelson and Carlos Santana, associations that give a strong hint at what’s at work here on Rockpango.

After proving themselves one of the most stunning and wonderful musical success stories of the last decade, Los Lonely Boys are now carving out their legend with their fourth studio album. Even though the band has already shown they can “up the ante with greater musicianship and confidence” (People) every time out, on Rockpango they heighten the trajectory, open up their sound, and show what flourishing maturity feels like from these veteran yet still young and burgeoning musical talents.

Rockpango is a spirit and sound coined by Los Lonely Boys that takes the next step from fandango (a beat of loving celebration) and then huapango (another infectious Latin rhythm that gets the fiesta cooking) to a full-scale Tex-Mex American roots rock party galore. Bursting out of the gate with the simmering and slinky “American Idle” that scans today’s tough economic times, and wrapping up 10 tracks later with the fierce and fiery assertion that love is the answer on “Believe,” Los Lonely Boys look at the big picture around us with the concerns and continuing faith that come with well-grounded adulthood.

They soar on “Fly Away,” rip it up to percolating Latin beats on “Love In My Veins” and “Baby Girl,” and reassert their mastery of the classic music that influences them as demonstrated on their recent 1969 EP. They deliver ‘60s style blues-rockers on the rousing title tune and powerfully loping “Change The World” — two more slices of their spot-on social commentary and consciousness.

The trademark Los Lonely Boys genetic vocal blend is deeper, richer, more fluent and confident than ever. The rhythms are utterly irresistible as well as flush with smart syncopation and muscular drive, abetted on some tracks by tour percussionist Carmelo “Melo” Torres. The brothers’ songwriting skills stamp indelibility on every winning number. And Henry Garza goes even beyond what Guitar World hails as being a “guitarist with chops out his ass who doesn’t care about chops [and] just opens up and plays.” Joined by veteran Austin player Riley Osbourn on keyboards, Los Lonely Boys deliver and more on Rockpango.

“I’m super proud of it,” says JoJo Garza, bassist and middle brother in the triumvirate. “It’s just progress, maturation and growth. Growing up, being older, seeing the world we’re living in. It’s also touching base with home.”

Los Lonely Boys tale to date is already the stuff legends are made of: Playing behind their father as kids in cantinas and honky-tonks. Moving to Nashville in their teens to try to win a record deal. Returning to their native Texas, where the brothers made their bones on the club scene as a live act. Releasing their self-titled debut, which goes double platinum, and penning a #1 radio hit in “Heaven.”

Two more stellar studio albums followed: Sacred (2006) and Forgiven (2008). In 2009, they cut 1969, an EP that leaps back four decades to reveal how the group’s roots extend well past their birthdates on songs by The Beatles, Santana, The Doors, Buddy Holly and Tony Joe White. 2010 brought about the release of Keep On Giving: Acoustic Live! a snapshot of their recent acoustic tour.

So after all that, what’s left but to meet the new decade with the great leap forward, upward, outward and onward of Rockpango? “It was just time to grow and change,” explains JoJo. “But not change too much. It’s kind of like a tree. A tree doesn’t actually change much as it grows. It gets taller, grows more branches, gets thicker and stronger. “I think it’s one of our best if not our best,” he adds. “We took the ball and I think we scored a touchdown.”

And after eight years of championship seasons, Rockpango paves the way for Los Lonely Boys to enter the rock’n’roll pantheon of legendary musical artists while also remaining true to themselves. “We’re still Lonely Boys,” JoJo insists, chuckling in agreement that they are also now Los Lonely Men who have truly come of age on their latest. “We’re still family, we’re still three brothers, we’re still doing what the good Lord has blessed us with, and that’s singing and and playing for people who really want to listen.”