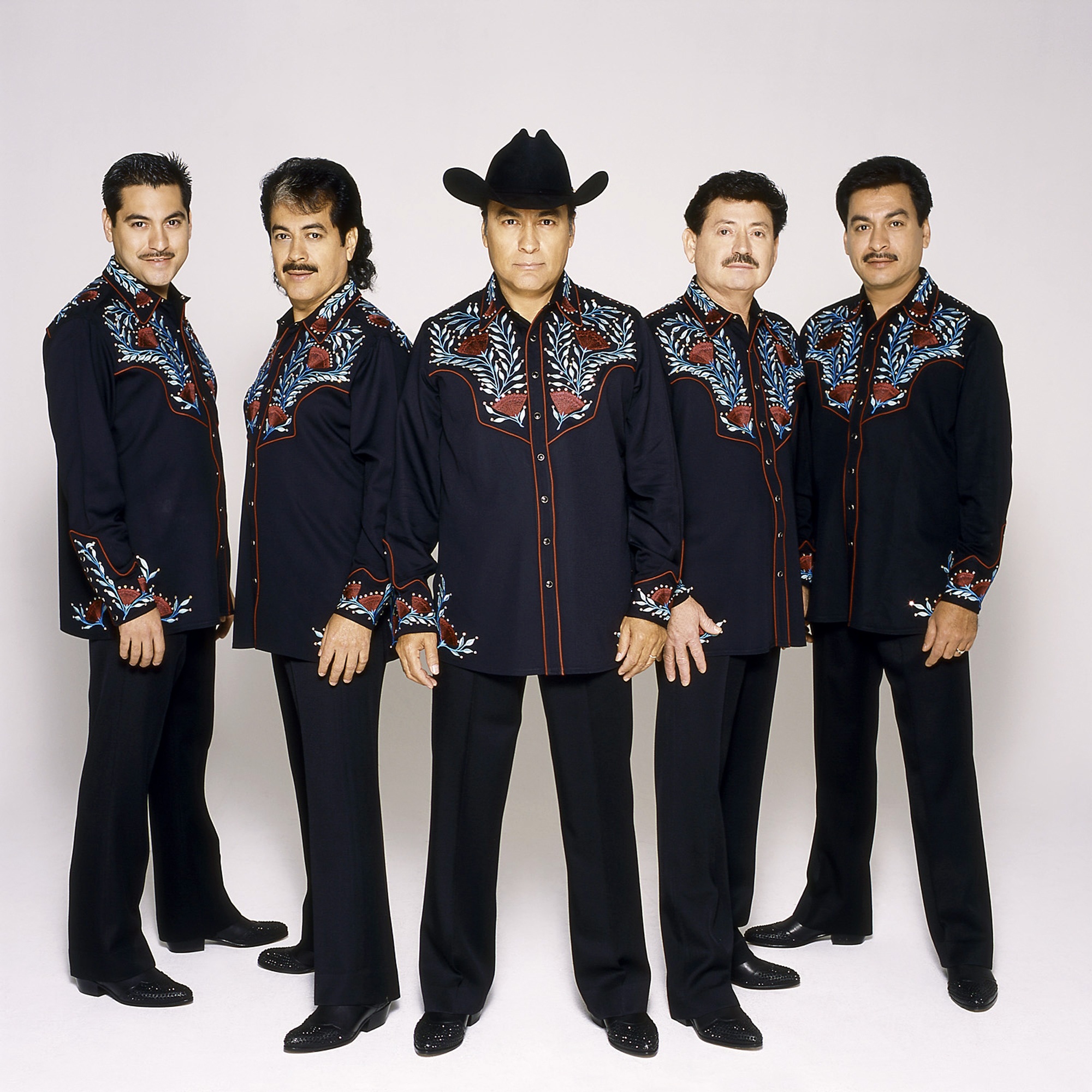 “Historias Que Contar” as its name implies ‘Los Jefes de Jefes’ continue to chronicle their journey through the music world on each song. As true spokespersons of their ‘pueblo’ (the people) Los Tigres del Norte’s new album is filled with rich lyrical content delivered via 14 stories/songs written by prominent composers who have been instrumental in giving life to Los Tigres del Norte’s musical message such as: Paulino Vargas, Manuel Eduardo Toscano, Juan Villareal among others.

In each song Los Tigres del Norte narrate a tale that explores not only their people’s emotions, whether it be love, loss, deceit, betrayal but also brings to light to human error and the consequences of an irreconcilable past.

As true spoke persons of their people the first single that leads us to their new musical journal is “Señor Locutor,” written by Manuel Eduardo Toscano, a compelling story that details the too-familiar tale of a man who is reunited with his estranged son through a radio DJ.

The video for “Señor Locutor” was directed by renowned Pablo Croche and filmed in Oakland, California using the city as a backdrop as well as a local radio station. The video does an amazing job at portraying the story as each of Los Tigres del Norte participate as actors, the video runs the story simultaneously through four separate screens as the drama of the story unfolds.

The album’s repertoire accounts for many tales offering romantic themed songs such as “Tu Ingratitud” magnificently interpreted by Eduardo, the touching track about confronting the tough decision of leaving behind ones life for the ‘American Dream’ on “Tu Decides” sung by Jorge and Hernan, while the song “Al Estilo Mexicano” beautifully interpreted by Hernan, this song pays tribute to women and rejoices in the Mexican culture and “Me Haces Falta” sung by Luis is an emotion driven song about losing the love of your life. At the same time the group includes corridos such as: “Regalo Caro” boldly interpreted by Jorge this song tells the tale of a gun man who sets out to prove his loyalty to his ‘boss’ and “Le Compre La Muerte A Mi Hijo” a corrido that offers a moral as to nurture family with love and not with material wealth and lastly, “No Diet” a quirky and highly danceable cumbia about the turmoils of ‘dieting.’ Aside from musical excellence, the DVD features two music videos; “Señor Locutor” and “Directo Al Corazon” (from their previous musical effort), plus behind the scenes of the recording of the video “Señor Locutor”, a special interview with the group’s commentary and a deluxe photo gallery.

History: Los Tigres Del Norte’s musical career can best be described by ‘el pueblo’s modern day story tellers’, ‘spanning generations,’ and ‘worldwide success.’ The group has taken the century old tradition of ‘corrido’ (story, song, celebrating the enduring pursuit of truth, justice and opportunity, whether by heroes or ordinary folk) as an art form. They’ve made it their own powerful vehicle to express not only the plight and adventures of many who have come to this country from different parts of the world seeking a better life for their families, but also to bring attention to the many challenges faced by working people.

The godfathers of Norteño genre have towered in the realm of Latin music, taking the polka rooted Norteño sound and mixed it with true tales of social injustices and current events told by them as modern day storytellers. Their unique lyrics of social conscience have endeared them to millions of people who see in them a reflection of their past, present and future. Thus their fans have affectionately nicknamed them ‘ Los Idolos Del Pueblo”, (The People’s Idols) for their sincerity and humbleness.

Founded by musical director, lead vocalist and accordionist Jorge Hernandez, whom together with his brothers Hernán, Eduardo, Luis and cousin Oscar Lara, founded Los Tigres Del Norte embarking on a musical journey that would lead them to unimaginable heights.

From the beginning, Los Tigres Del Norte’s music had been steeped in emotion of honor, pride and respect for their culture.

In 1968, a band of brothers left their hometown of Rosa Morada, Mocorito in the state of Sinaloa, Mexico and headed to the United States, in the hopes of helping in supporting their family. The group’s name came about when an immigration official called them ‘little tigers’ (nickname for kids) while crossing the California border and since then, bound for San Jose the story of Los Tigres Del Norte was about to start.

The group established themselves in San Jose, California, the city that until this day remains their residence. It was in this city during the early 70’s, that Los Tigres Del Norte became the first artist signed to then upstart Fama Records by local empresario named Art Walker who happened to listen to a live radio presentation of the group recorded at the local Parque De Las Flores on Keyes Street, where San Jose’s Mexican community congregated on Sundays.

The group became the first artist signed to his newly established company that in time became the leading Spanish language recording company in the West Coast. Upon signing the group was advised to modify their sound from their traditional acoustic, to more of an electric sound with a full set of instruments (drum set, electric guitar, and bass) and went on to record their first album. With time, the group modernized their music, exploring with boleros, cumbias, rock, and waltz elements.

Their socially conscious tradition began to manifest itself on Los Tigres Del Norte’s earliest hits, “Contrabando Y Tracion,” a tale of contraband and betrayal starring drug trafficking couple Emilio Varela and Camelia La Tejana (1971), “La Banda Del Carro Rojo” (1973) and really took form with later songs such as: “La Jaula De Oro” (1986) which spoke of life in the ‘gilded cage represented by the United States where immigrants enjoy economic progress but their childen often forget their culture,’ and the renowned classic “De Paisano A Paisano” (2000) to name only a few.

As part of their musical mission, the group took it upon themselves to never allow their image to be misrepresented by being photographed with weapons or use offensive language in their music. They have also taken upon themselves to express their respect and loveliness of women in their songs and to never glorify ‘narcotic’ themes as they have approached this issue as a point of view or relied on their storytelling method.

During their transition to the new millennium, Los Tigres Del Norte were paid tribute by leading Mexican rock bands who honored the group by singing their greatest hits in an album that has become a collectors item titled “El Mas Grande Homenaje A Los Tigres del Norte”(2001). This album not only symbolized the recognition and respect from the Latin rock community but it became a testament to the group’s multi -generational and diversified musical appeal.

Their appeal became more widespread, when they became the most highly anticipated performance in Mexico’s ‘30th Annual Festival Cervantino’ (2002) an international week long event that was previously reserved mostly for the fine arts. As a special tribute to the legend, the group was joined by Mexico’s top rock bands Molotov, La Barranca and Julieta Venegas.

Consistent touring to Spain followed this release, proof of the success, recognition ignited from the Spanish public, as well as media and personalities of the intellectual and artistic world.
This would signal the start of Los Tigres Del Norte’s international expansion. In 2003, the group performed for the U.S. troops stationed in Japan and Korea during a tour that took them to Asia and Hawaii.

In 2004 their international expansion led Los Tigres Del Norte to global status, as they performed in South American countries such as: Chile and Colombia. In addition, the group participated at the worldwide-recognized cultural event ‘Forum Universal de las Culturas’ (2004) in Barcelona, Spain where they performed at the closing ceremony.