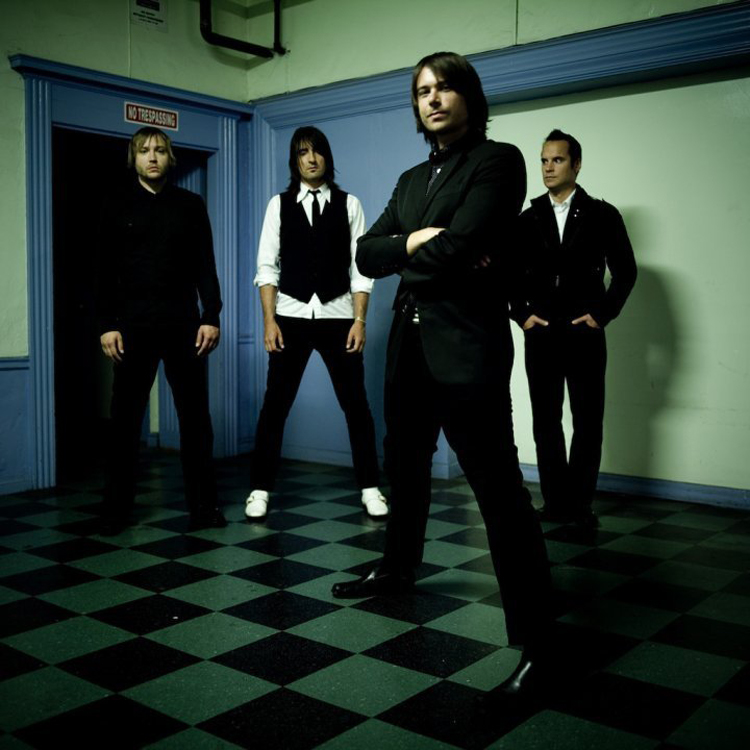 Sugarcult have released three albums, “Palm Trees & Power Lines” (2004) and “Start Static” (2001), one DVD, “Action” (2003), A DVD/CD “Back To The Disaster” (2005) and are back with a brand new album “Lights Out.” They already have a hit single and video for “Do It Alone” and just recently played a sold out headlining tour. They’re ready to head back out on the road in November for the second leg of their headlining tour!

Sugarcult doesn’t play by the rules. Since the 2001 release of their debut album, Start Static, the Santa Barbara-based quartet has been rewriting the book on how to succeed in the brave new world of post-millennial rock & roll.

Taking their characteristic DIY attitude to the limit, the band brought its case directly to the people. Crisscrossing the world for two years nonstop and playing hundreds of shows, Sugarcult has shared the stage with many of today’s most established and hottest upcoming bands. They also hit the main stages of major festivals like Warped in the U.S., Glastonbury, Reading & Leeds in the U.K. and Summer Sonic in Japan.

Along the way the band found fans at modern rock radio and MTV 2, and earned the respect in magazines like Alternative Press, landing in the Top 5 of the magazine’s annual Readers’ Poll. Kerrang stated that the band delivers music “the way it should be played: loud, colourful, larger-than-life”.

The energy and dedication Sugarcult brought to Start Static created a massive fan base for the rock quartet around the world, selling nearly half a million copies — 300,000 units in the United States alone. On their new, Gavin MacKillop produced album, Palm Trees and Power Lines the plaintive edge that lurked below the surface of singer/guitarist Tim Pagnotta’s songs is now front and center. The new material has an emotional intensity that matches the band’s electrifying musical jolt. Sugarcult is quintessentially Californian, and the new album’s 12 songs play out against the backdrop of California’s beauty and ugliness, its romance and reality; documenting a physical and psychological journey that begins and ends at the edge of the Pacific.

The group took shape in 1998, starting with Pagnotta, who after a nomadic childhood hooked up with bassist Airin and the band’s first drummer Ben Davis at City College in Santa Barbara. Soon thereafter Sugarcult played their first gig supporting Superdrag at a local club. This gig was also attended by Marko 72, a scenester who’d played bass with punk bands the Ataris, the Swingin’ Utters and Nerf Herder (in addition to running an bedroom indie label, hosting a weekly radio show, working in a record store and writing for the weekly tabloid). Tim and Marko found they loved the same bands, from Elvis Costello and The Clash to Nirvana and Green Day, and before long Marko was playing guitar in the band.

After gaining some notoriety in the Central Coast music scene, the boys pointed their van south on the 101 and began their quest to conquer the highly competitive environs of Southern California. Says Marko, “We’d use the money we’d made in packed gigs in Santa Barbara to subsidize total disasters a hundred miles away. But we quickly developed a fan base, and it seemed really natural, not fabricated.”

Immediately after completing Start Static with producer Matt Wallace, Sugarcult hit the road as the new kids on the 2001 Warped Tour. The unknown band went over so well that what was initially a two-week run was extended through the entire two-month tour, and they were back again the following summer. Thus the seeds were sown that led Sugarcult on one tour after another – resulting in a rabid fanbase. It’s a phenomenon that has less to do with airplay or endcaps, and more to do with the direct result of a genuine, wholly organic buzz.

Now, with three more years of experience and musical honing under their belts, Sugarcult (with recent addition Kenny Livingston on drums) has delivered an album with immense promise. When the time came to write the new album, the songs came quickly, having been percolating in Pagnotta’s brain during the course of his travels. “We’d just played over 300 shows and traveled the world a couple of times – from which so many experiences and emotions evolved. All these new songs were written in about a month after coming off the road. It was a matter of tapping into the moments and memories in order to recreate the feeling.” “The themes are a little darker,” adds Marko, “and Tim’s really opening up.”

On the undeniably catchy rocker “Memory,” the band effortlessly dives into one of the themes that have made them such an important band to their fans – love hanging by a thread. The similarly wrenching songs, “Crying” and “Over”, search for a glimmer of affirmation amid the debris of shattered romantic dreams.

“Back to California,”encapsulates the album’s dramatic payload in a vivid narrative (“Drive all night to hold you tight / Back to California / We couldn’t win in the end”) that recalls the climax of an earlier California saga of highways and hope, The Graduate.

“These songs are fresh documents of our lives over the last two years,” says Marko. “We’re more confident as musicians, we’re more confident in our ideas – because, when you set out to do something against all odds and it’s working, that just strengthens your resolve. It gives you the confidence to take more chances, keep doing the things you’ve been doing without apologies and just go for it.”

Sugarcult has upped the ante with a musically and emotionally resonant album that marks the coming of age of an important new band with something to say and the firepower to put it across with a vengeance. There’s simply no quitting – and no compromise – with this crew. Get used to having Sugarcult around, because they’re not about to go away.