On Saturday, July 13th, 2019, the next stop for Pepe Aguilar Y Familia’s Jaripeo Sin Fronteras Tour was at the Coliseo Centenario in Torreon, Mexico. This show was highly anticipated, and it definitely showed. Pepe Aguilar and Family performed in front of sold-out audience of 7,000. Pepe Aguilar’s return to Torreon, Mexico made it back to back sold out performances. He performed all of his hit records including songs like “Mujeres Como Tu”, “Prometiste”, and Ni Contigo, Ni Sin Ti”. His daughter Angela Aguilar and son Leonardo Aguilar also performed their own songs. Their performances were then followed by a performance by Antonio Aguilar Jr. The Jaripeo Sin Fronteras tour is a one of a kind entertainment experience and one you don’t want to miss. 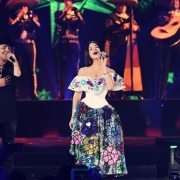