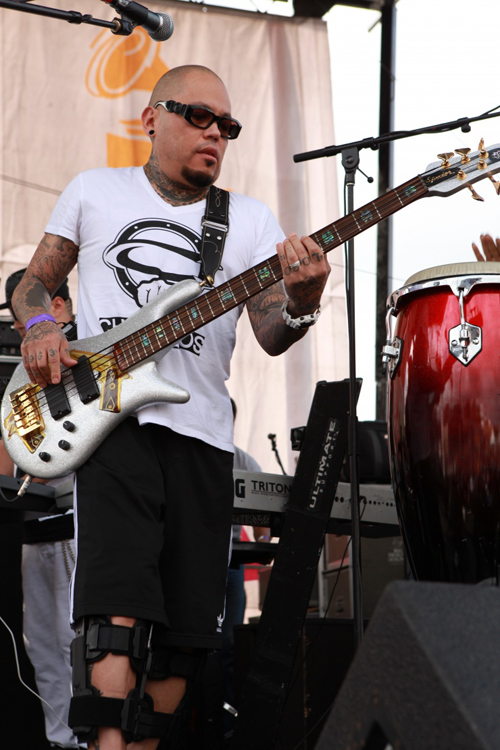 Abraham Quintanilla III was born in Toppenish, Washington, the first child of Abraham II and Marcela. Just three months after his birth, the family moved down to Lake Jackson, Texas, where A. B. and his younger sisters, Selena and Suzette, were raised.

Washington is where the first stage in the life of this extraordinary musician, producer, songwriter, loyal family member, and survivor began. But he proved he was ready to introduce the world his brand of music when his sister Selena, became one of the brightest young stars in Latin music. A. B. was at her side, producing her records, writing her hits, playing bass onstage with her in their family’s band. But in the dark years that followed her passing in 1995, A. B. had to fight back toward the light on his own.

He’s won Grammys and BMI songwriting awards, founded and led some of the most popular bands in the modern Latin market,

Like his sister, A. B. has built a unique sound in his music by drawing from diverse sources of inspiration. Yet no matter how many careers he launches, or how much he helps to enrich America’s changing soundscape, he will never turn his back on the past, on the lessons learned through hardship as well as love.

As A. B. and his sisters learned Spanish, they also began playing gigs as Selena Y Los Dinos

Nurtured by a growing interest in their heritage, the Quintanilla’s began exploring Mexican-American genres in their first album, a mixture of original and cover songs, in 1984, and hunkered down into a life on the road, playing anywhere and everywhere they could find an opportunity

Selena, the youngest, was the headliner, already winning attention before she was ten years old. Suzette played drums and handled the marketing. A. B. wrote the songs, ran the show, and produced their studio sessions.

This beautiful ride came to its end with Selena’s passing in 1995. For a year A. B. reeled from the shock.

His first effort was for the singer Thalía, who scored a hit with A. B.’s “Amandote.” He followed this with “Te Quiero, Te Amo,” written for David Lee Garza as belated repayment for his appearance on accordion nearly ten years before on an early Selena session. Other work came in quick sequence, for Cristian Castro, for Mexican pop star Verónica Castro and her son Cristian, for the Puerto Rican merengue chanteuse Olga Tañón. Though helpful in bringing him back to action, this work still left A. B. feeling unfulfilled. “For every ten cuts on any Selena album, I wrote maybe eight of them,” he says. “I wasn’t used to just taking nibbles, an occasional song for someone else, here and there.

For the next year and a half A. B. devoted himself to creating the Kumbia Kings, a razor-sharp eight-piece band that could play with authority in a number of styles. With A. B. writing and producing, the Kings released their debut album, Amor, Familia Y Respeto, in 2000. The feel is a mélange of Latin and other elements, with a multicultural array of guest artists that includes Sheila E, cumbia saxophonist Fito Olivares, R&B vocal harmonizers Nu Flavor, Puerto Rican rapper Vico-C, and, in one of his last performances, techno-funk innovator Roger Trautman. Sales of Amor, Familia Y Respeto were hot out of the gate; as of now, more than a million copies have sold throughout the U.S. and Mexico. A.B. Kumbia Kings followed in early 2001 with SHHH!, which broke out in its first week at Number 2 among Latin releases and refused to drop from the charts for nearly two years; All Mixed Up: The Remixes, a daring transplant of remix artistry into the Latinmarket, in 2002; and 4 in March 2003, another genre-juggling project that veered between Spanish and English, R&B balladry and electro-cumbia, and innovative fusions of pop, reggae, hip-hop, and vallenatos. All-star appearances by Aleks Syntek, El Gran Silencio, and the Grammy-winning group Ozomatli brought extra dimension to the Kings’ already encompassing style; one track, a cover of the Mexican icon Juan Gabriel’s “No Tengo Dinero,” is an historic wrap of the classic and the cutting edge, with Gabriel and Monterrey’s rock/rap powerhouse El Gran Silencio both backed by the Kings. Another track, “Don’ t Wanna Try”, is an R&B hit. Along the way they broke attendance records at the San Antonio Livestock Show & Rodeo, duplicated Selena’s feat of selling out the Astrodome three times, racked up four Billboard Awards, seventeen Tejano Music Awards, four Furia Musical Awards, two Ritmo Latino Award, a Premio Lo Nuestro Award .

But as the Kings’ star rose, A. B. was already looking beyond the horizons of their success. Relocating from Corpus Christi to McAllen, Texas, he founded King Of Bling as a label, talent agency, and recording company. Under the KOB umbrella, he has pursued plans as traditional as album production (recent clients include Paulina Rubio) and an upcoming television project. In the middle of 2006 the group was going through an aggressive line-up change, therefore A.B. decided to change the name of the group to Kumbia All Starz.

Quintanilla continued to tour with “Kumbia All Starz”, while the album would go on to sell near a half a million copies.  In September of 2007, A.B. took the group back into the studio to accomplish one thing: to make the best album that he could possibly make.  The group spent four months of hard dedication and long hours in studio in order to achieve Quintanilla’ s goal.  Quintanilla explained, “If we would run into a wall, and the vibe was not there, I just would just say ‘ Pack it up. We will start again tomorrow.’

Planeta Kumbiawill was released on March 4, 2008.