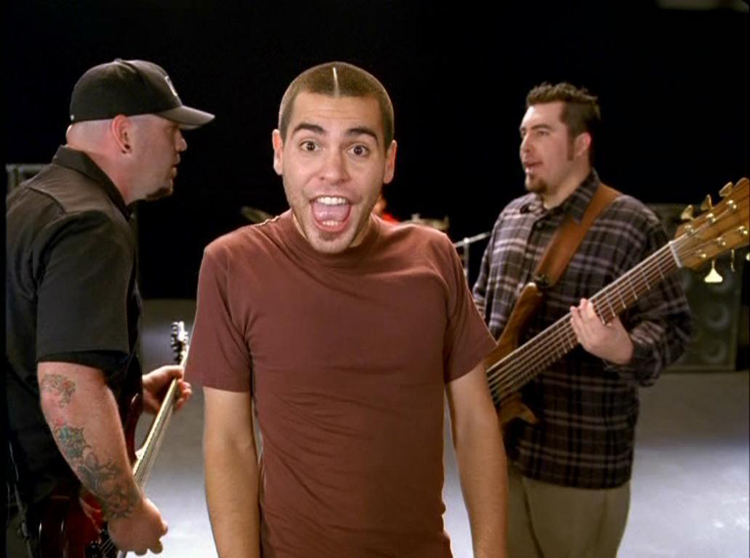 “We want to make music that’s timeless,” says Alien Ant Farm guitarist Terry Corso. “We want to do songs that don’t come out of a mold but still have the qualities that make a song click. We like to have a good time and be goofy – we’re just regular Joes – but when it comes to making music and connecting with our fans, everything else is secondary.”

AAF’s continued commitment to making timeless m…usic is particularly meaningful in light of all that has transpired in the last two and a half years. ANThology took the quartet from their boyhood homes in Riverside, Calif., and thrust them upon the global stage, selling more than three million copies worldwide. But their hopes for further progress – and, indeed, the group members themselves – nearly died on a roadway in Spain in 2002 when their tour bus collided with a truck, killing their driver and seriously injuring the band and crew.

Mitchell was the most severely wounded of the quartet, suffering a fracture to his C2 vertebra. In layman’s terms, that’s a broken neck. Corso shattered his left fibular shaft, the leg bone just above the ankle. Zamora chipped a bone in his right toe. The most fortunate of the traveling party, Cosgrove escaped with cuts and bruises.

Mitchell required surgery and was forced to wear a metal halo to restrict the movement of his head and neck during the long months of recovery.

“After the accident, nobody was talking about the next record. The guys were pretty much on hiatus, waiting to see what would become of me,” Mitchell says. “But at some point we had a meeting, just to go over some administrative-type stuff, and I brought in some song ideas. They were very surprised that I’d started writing again, but then everyone figured, ‘Okay, I guess we’re ready to start this up again.’ After that, things came together really quickly.”

Heartened by the band’s forward motion, Mitchell nonetheless suffered lingering pain. “I have good and bad days, mostly good ones,” he says now. “My spinal cord did get hit, and I have some permanent nerve damage from my upper chest into my head; it kind of feels like a bad sunburn all the time. It’s tolerable, though, and I try not to complain about it, because my other option would have been a wheelchair.”

AAF slowly regained their physical and emotional strength, with spirits rising in a concentrated burst when the DeLeo brothers signed on to produce truANT. “Working with them was right up our alley,” Cosgrove attests. “We were looking for a producer who would get in there and recognize what we’re trying to do, someone who wouldn’t mind getting dirty with us but was also really musical.” Mitchell adds: “Dean and Robert really get it because they’ve been in a band themselves for so long.”

Despite the fact that truANT was the DeLeos’ first production outing (beyond their STP side project Talk Show), AAF somehow sensed they’d be perfect for the job. “When we first met them, we talked for a really long time before music even came up,” Mitchell reveals. “It sounds weird, but the longer we talked and music didn’t come up, the more excited I was to talk about music and the more I knew this was the right fit.”

That was confirmed when Mitchell and Robert DeLeo began working closely together to determine what would produce the definitive vocal take: “Every time I’d go in to sing, Robert would pour cayenne pepper on my nuts; I would pull my balls out and he’d sprinkle cayenne on ‘em,” Mitchell illuminates. “It burned really bad and just made me sing better. We did it for every single singing part on the record. I’m taking the cayenne on tour with me. What sucks, though, is that once you start singing and moving around and you start to get a little sweaty, the cayenne absorbs into your skin and it really feels like someone put your genitalia in a vice.”

A certain musical spice, meanwhile, found its way into the music. truANT showcases the heavy sounds that brought Alien Ant Farm their initial fame – the band’s supercharged version of Michael Jackson’s “Smooth Criminal” went to #1 on Billboard’s Modern Rock Tracks chart; but it also finds them experimenting with acoustic textures and Latin and Caribbean rhythms.

“There’s plenty of hard stuff, but there’s also other stuff that’s mellow, or has a different kind of groove,” Corso confirms. “Showing off our versatility was really important to us. We wanted the fans to see that we’ve grown musically.”

“We’ve always been into different kinds of music, but it’s harder to make a statement about that when you’re just coming up,” notes Cosgrove. “There are so many different sides to this band. We’re not really metal, we’re not really punk, we’re not really reggae, Latin, jazz or pop – we’re a little bit of all those things.” Thematically, truANT is equally diverse, telling of betrayals by lovers and friends, relationships torn asunder or patched back together, the damage done by unrestrained emotions and appetites.

Mitchell says “These Days,” the first radio track off the disc, is “about realizing that things aren’t bad even when they’re bad.” He elaborates: “When I think of it in relation to the accident, I realize, hey, don’t sweat the small stuff. As bad as things can get, I’ve seen way worse.”

“I don’t want to sit here and say, ‘Oh man, these songs are so deep,’ but they’re deep to me, the music and the feel of them as much as the lyrics,” Mitchell explains. “When you just read the lyrics, they seem pretty basic, and I wanted them to be like that, kind of transparent. But when you put them with the music, it’s something else entirely. When I’m singing, there are three incredible musicians around me making that happen, and it feels pretty amazing.”

Asked about a song they did not write, Corso reflects: “‘Smooth Criminal’ had a life of its own. Looking back, it was actually a pretty cool way to bring people into the rest of the record. And that crazy, fancy-free attitude is a major part of our band. It may have a little stigma attached to it because it’s a cover and because Michael Jackson has so much media baggage these days, but anyone who’d write us off for that reason, I guess we’re not for them anyway. On the plus side, our success with that song has definitely kept the giraffes fed – the livestock at Neverland Ranch is living large because of publishing royalties from us.”

It’s a testament to Alien Ant Farm’s personal fortitude that they’ve maintained their sense of humor, and perspective, throughout the ups and dangerous downs of their recent past. It kept them from getting too spooked, for instance, by a cosmic convergence that occurred as they were finishing the truANT mixes, with mixer Brendan O’Brien. Corso relates: “We hadn’t been thinking about the accident at all, but someone looked up and said, ‘Wow, check out the date.’ It was May 22 – exactly one year to the day of the bus crash.”

“It was really emotional seeing that date written on the CD,” Mitchell confides. “It felt redeeming, knowing there are bands out there who take longer than we did to make a record without any adversity or injury. And it’s not just that this one came really quick; we’re extremely proud of how it turned out. We may write better songs in the future, or even make better records, but I think this one will always be my favorite because of what happened and how strong we came back. When you look at our career that way, we’ll never top it.”