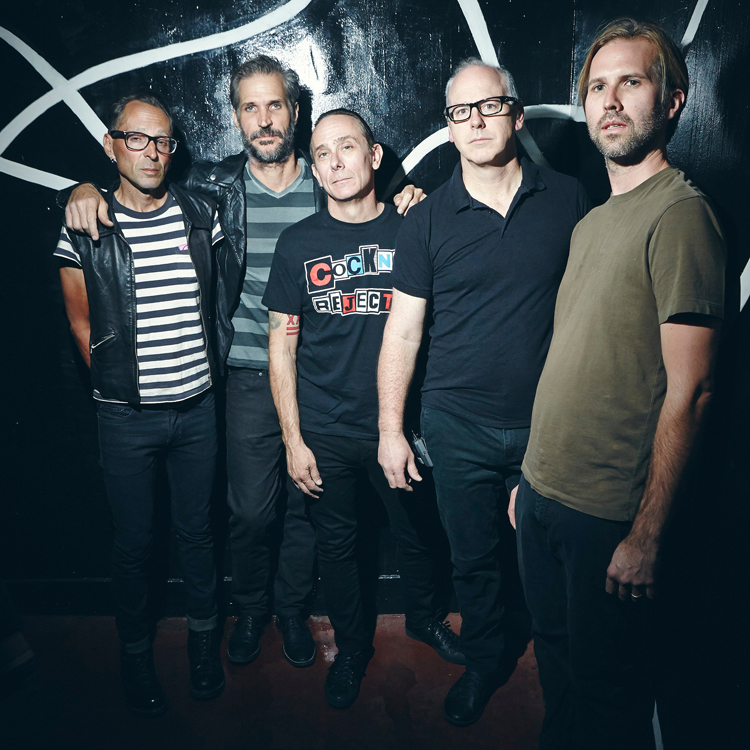 The music has the furious beat and driving buzz saw guitars of classic punk rock, but when a vocal chorus cuts in, it is surprisingly harmonious and emotionally evocative, reminiscent of The Beatles or The Everly Brothers.

This is a sonic contradiction that works to stunning effect. It is also a sound that has come to define one of the world’s most original rock bands, BAD RELIGION. To call BAD RELIGION simply a punk band is akin to labeling the Who, a mod band, or Pet Sounds era Beach Boys, surf music. True, these bands were each defined by a time and a place – and you can definitely hear echoes of the Los Angeles punk scene in BAD RELIGION’s melodic and energetic music. But like the other bands, BAD RELIGION has both honored and yet completely transcended their roots. Their newest effort THE PROCESS OF BELIEF is no mere hardcore revivalism; it is, in fact, the complete evolution of punk music, a record that successfully redefines a genre the band helped to popularize. If you love punk rock, this disc will surely quench your thirst like no other, and if you’re simply looking for an incredibly vital and inspiring rock record, the same holds true.

The band’s songwriters, singer Greg Graffin and guitarist Brett Gurewitz are back working together after years apart. This renewed collaboration seems to have brought the band to the peak of their game. Unlike many veteran artists who seem to lose their way over the years, BAD RELIGION has instead deftly harnessed their mutual life experiences into an incredibly focused and inspired work. This is never more apparent than on the intensely intimate song “Broken,” with its compassionate portrait of deeply flawed souls. The chorus sings out plaintively against a backdrop of crashing guitars, “While I’m not the kind to insist, you couldn’t have missed, we must co-exist. So please listen to me, there is no such thing, as human debris. Broken? I said I’m not broken. A little cracked but still I’m not broken.” seeming an almost personal plea for forgiveness and acceptance. When the band kicks into overdrive on the hyper-fast new song “Materialist” one hears punk rock at its very zenith, with intelligent and thoughtful lyrics like, “THE PROCESS OF BELIEF is an elixir when you’re weak. I must confess at times, I indulge it on the sneak” set against frantic staccato drumming and bristling high-speed guitars. This juxtaposition of energetic music and insightful lyrics is a quality that, from their very inception, has set BAD RELIGION apart from the pack.

Set in relief against the faster songs on THE PROCESS OF BELIEF, is the stunning mid-tempo anthem, “Epiphany.” It builds from a lone contemplative bass line to an emotional and symphonic crescendo of thundering guitar chords and interweaving choruses singing the refrain, “Only to discover, that our values ran us aground, on the shoal in the sea, of what we could be. What’s right is wrong, what’s come has gone, what’s clear and pure is not so sure.” It truly sounds like nothing else on the current musical landscape — both heartfelt and refreshingly original. BAD RELIGION began, like so many creative forces, as a reaction to an inhospitable environment. In this case, the heat baked Los Angeles suburbs of the San Fernando Valley, a sprawling smog infested dystopia of mini-malls and suffocating boredom. It was in this climate that three disaffected teenagers, Greg Graffin, Brett Gurewitz and Jay Bentley, met and formed BAD RELIGION, practicing in a small garage and playing live amidst the volatile LA punk scene.

When the major record companies refused to sign anything resembling punk, Gurewitz decided they would simply start their own label to release the band’s incendiary music. BAD RELIGION soon issued a crudely recorded self titled EP on a newly formed Epitaph label and quickly followed up with a much better produced full-length album titled “How Could Hell Be Any Worse?” a record considered by many to be a milestone of Southern California punk music. Gurewitz eventually left the band and was replaced by Greg Hetson from speed punk pioneers, the Circle Jerks. In 1986, Gurewitz decided to take another shot at the record business and opened a small recording studio in Hollywood called Westbeach.

When Hetson couldn’t make a show one night, the band asked Gurewitz to fill in and he was soon back in the line up, playing alongside Hetson. In 1987, the band entered Westbeach and recorded a batch of energetic new songs for an album called “Suffer,” a stunning combination of high-octane punk songs and solid production values, which was a success with both fans and critics. Many would say it was also responsible for reinvigorating the entire punk rock genre. Punk was soon back with a vengeance and it was no coincidence that much of it sounded like BAD RELIGION with driving beats and melodic harmonies. The following years saw the revitalized band releasing almost an album per year, gaining international popularity and even landing a hit radio single with the song “Infected.” In 1993, the band moved to Atlantic records. A year later, Epitaph found itself experiencing a sudden growth as punk music finally exploded into mass popularity. This resulted in Gurewitz again departing the band to dedicate himself full time to his quickly expanding label.

BAD RELIGION recruited lead guitarist Brian Baker, previously of underground legends, Minor Threat, and forged ahead, continuing to release records and tour. Gurewitz on the other hand, found himself waging an agonizing battle with drug addiction that saw him eventually in jail, and most assuming he would be yet one more punk rock drug casualty. When all seemed hopeless, he managed to rally and slowly work his way back. Gurewitz and Graffin had always kept in touch, but as attractive as collaborating again seemed, there were serious obstacles in place. The band still owed their label another record, and a revitalized Gurewitz was occupied with his work at Epitaph. A year and a half ago, the path finally cleared and BAD RELIGION invited Gurewitz to rejoin the band he had helped to start. He agreed and, in turn, asked BAD RELIGION back to a label initially created to release their music.

The “Process of Belief” had begun. The band returned to Gurewitz’s Westbeach studios with the addition of a young drum prodigy named Brooks Wackerman, whose gifted playing has added a complexity and crispness to the new songs. The result is arguably BAD RELIGION’s best record to date. “There’s this tangible excitement amongst the band right now.” Guitarist, Baker says, “Brett is in heaven doing this. This is the only band that he’s been in. This is the only band Greg Graffin has been in. It’s like this is what they were put on fucking earth to do.” One of the songs on the new record is an urgent hook-filled romp called “Supersonic” that addresses the increasingly disposable nature of pop culture with the lines, “How does it feel to be outstripped by the pace of cultural change? My deeds are senseless and rendered meaningless, when measured in that vein.” An appropriate topic for one of the few enduring bands out there. Perhaps the key to their sustained relevance is their steadfast refusal to measure themselves by passing standards. BAD RELIGION, true to their punk roots, is a band completely guided by their own vision. The rest of us are just damn lucky that vision sounds so good. THE PROCESS OF BELIEF? Absolutely.