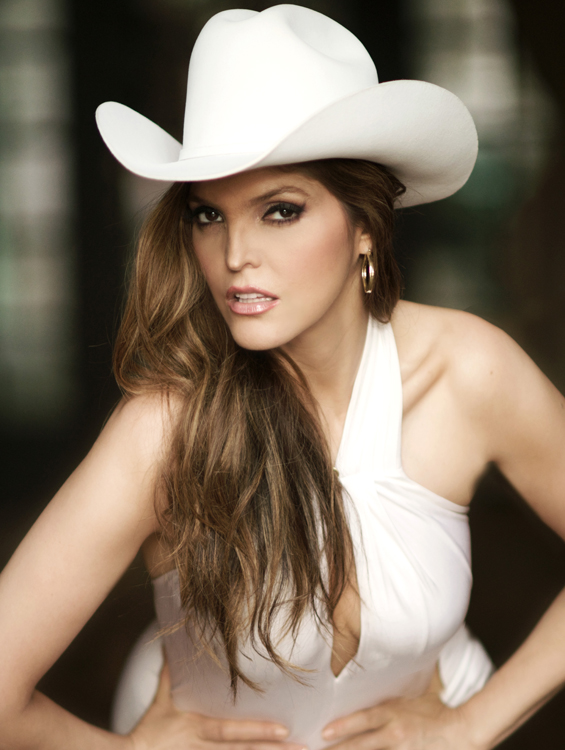 Ana Bárbara (born as Altagracia Ugalde Motta January 10, 1971 in Rio Verde, San Luis Potosí), is a Mexican singer. Her sister, Viviana Ugalde, was a teenage singer of some notoriety across San Luis Potosi when Ana Barbara was a little girl. Ana Bárbara usually attended her sister’s concerts, which made her want to become a singer herself. Ana Barbara would become a beauty queen before she reached stardom as a singer: in 1988, she became “Miss San Luis Potosí”, going on to represent her state in the Miss Universe-sponsored Miss Mexico beauty contest. She lost in her bid to become Miss Mexico, however.

In 1993, Ana Bárbara was proclaimed the “Ambassador of Ranchera Music”, and she also earned the Rostro Bonito de El Heraldo (“El Heraldo’s Beautiful Face”) award. In 1994, she signed with Televisa’s musical company, Fonovisa. Under the Fonovisa label, she launched her first CD, the self-titled “Ana Bárbara”. Her song, “Sacúdeme” (“Shake Me”), became a hit in Mexico. Ana Bárbara reached international fame after the death of Mexican-American singer Selena in 1995.

When Ana Bárbara’s self-titled CD was released to Hispanic listeners in the United States, it was advertised on television as a dedicatory to Selena. A song also named “Selena” was added to the CD prior to its American release. Soon, Ana Bárbara’s private life became paparazzi fodder, as one of Mexico’s most spoken-about singers. Her romance with popular imitator Julio Sabala in particular gave magazines much to talk about between the late 1990s and the early 2000s. There were rumors that the couple was actually considering marriage. Since Sabala is a Dominican who resides in Spain, Ana Bárbara also became very well known in Europe.

After their long romance, however, the couple broke up on what Sabala described as “amicable terms”. In 2005, Ana Bárbara’s romance with millionaire businessman and boxer Jorge Kahwagi became publicly known. This romantic liaison did not last long, however, and Ana Bárbara began a relationship with Mariana Levy’s widower, Jose Maria Fernandez, commonly known as “Pirru”, shortly after Levy’s death. The fact that she and “Pirru” began dating only about eight weeks after Levy’s passing proved controversial.

Ana Bárbara has since been largely criticized by Hispanic gossip shows both in the United States and in Mexico dating him so shortly after his wife’s death. Ana Bárbara is the mother of a small boy, Emiliano, born in 2000. She had another son born in Cancun, Mexico with her husband Jose Maria Fernandez. She has said that she does not use her real name because she dislikes it. On November 3 of 2005, Ana Bárbara was awarded a Latin Grammy Award.