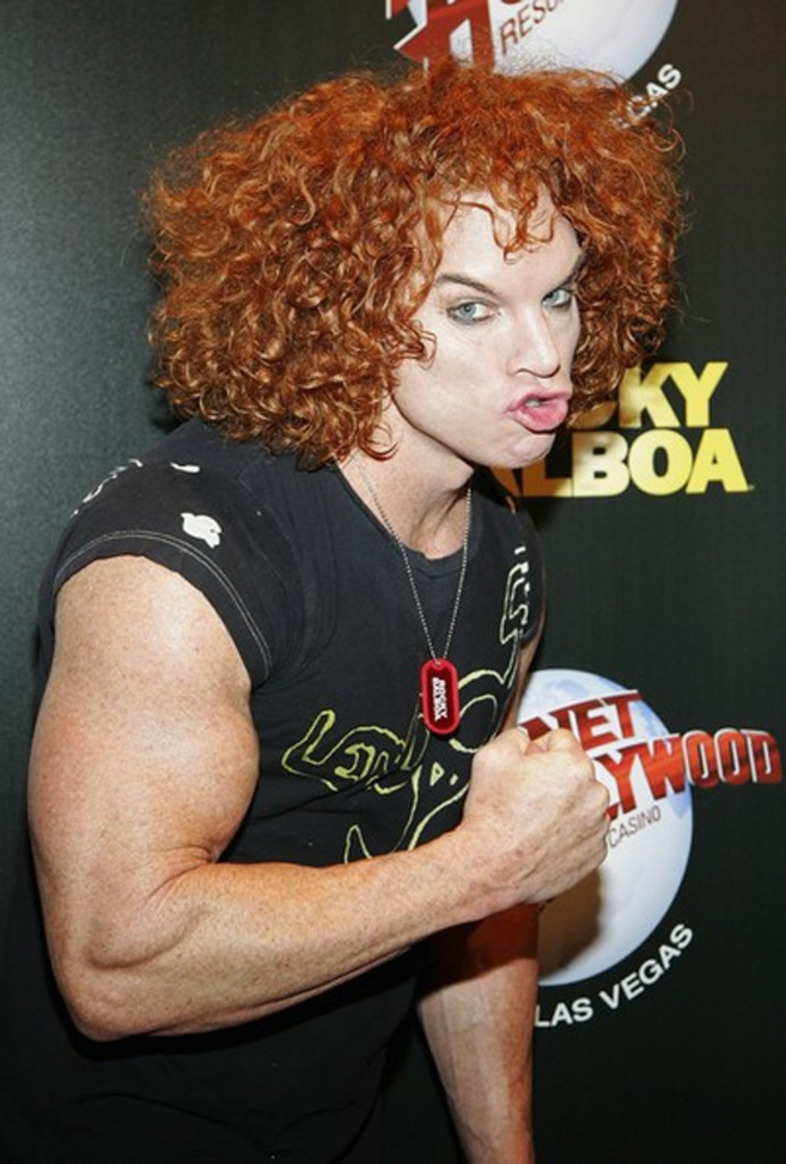 It’s surprising some of the strange little personal details people always seem to ask me. Hopefully, I can touch on a lot of these in this section. Come back often ’cause I’ll be updating this regularly.

First of all — yes, this is my real hair and it’s naturally this curly. There are some people who honestly think I went into a salon one day with a normal head of hair and said, “Can you screw it up real bad?”, and then paid for it.

My favorite color is plaid, but I love all colors and think they should all be worn at the same time. My philosophy on clothing is “Never Match – It’s Boring.” Most of the time, I create my own clothes since I can’t always find what I like in stores. I do buy a lot of clothes on Melrose and at American Rag in LA. I also check out stores in Soho and the Village in New York City. Occasionally, I yank clothes I like right off people’s backs as they walk down the street and I have been known to trade with people and even hit the thrift stores. In case you were wondering, for a brief time I preferred briefs or boxers, but all I can tell you now is “I’m Swinging Like a Pendulum.” – “Swing Low, Sweet Chariot”.

I start off each morning with coffee, coffee, coffee, coffee, coffee, coffee, more coffee and Pop Tarts. Can’t have enough coffee. You know, the first thing I have in the morning is coffee, and the last thing I have in the evening is coffee. I never sleep. Got to keep awake and alert all the time, ’cause you never know who is behind you … especially in West Hollywood. If you drop your keys there, just forget about it, go buy yourself a new car. As for anything else I consume–Crown and 7-UP, Crown and soda, Crown and … Tang! Yeah, that’ll work! Maybe that’s why I’ve got frequent admission points to the Betty Ford Clinic, where I spend most of my time. If I’m forced to drink anything non-alcoholic, I’m just forced to go to sleep. I hate those guys who carry bottles of water around, especially here in LA. Myself, I carry a water cooler on my back!!!

I’m originally from Cocoa Beach, Florida… Talk about a difficult place to get an education. When you get up, it’s really hard making the decision whether to surf or go to school. I went surfing more than I went to school. My father worked for NASA and my brother became a fighter pilot after going to the Air Force Academy on a swimming scholarship, and here I am on stage swinging around a plastic private body part. Now that’s giving my parents something to be proud of !!!

As I said, my father worked for NASA. He taught the astronauts who went to the moon how to drive the lunar module. Parallel parking in one of those things on the moon is a bitch. The Saturn, (automobile), reminds me of this all the time. What are they good for? Use it once and dispose. The only thing they’re really missing is a grass blade in the middle of the undercarriage of the car so they can be used to cut the grass in road medians.

I consider myself pretty strange. Sometimes I remind myself of the Kennedys. I don’t know, maybe I am a Kennedy or even an Osmond. Not because of the freckles or the red hair, of course, but because of my big teeth.

I went to school at the “Harvard of Florida” — Florida Atlantic University in Boca Raton. If it tells you anything, Boca Raton is French for “Mouth of the Rat.” ‘Nuff said. I majored in skirt chasing and minored in partying — finally graduating with a 4.0…..blood alcohol level. As I said, my parents were really proud.

I now live in Orlando, Florida and Los Angeles, California. I fly back and forth almost weekly. I have so many frequent flyer miles, they should paint the planes orange! I guess this means I’m bi-coastal. As for the places I live, I chose them specifically because of both Disney Land and Disney World. That way, if I have company visiting, I can just send them to either park and tell them to go play with themselves. Depending on which coast, I switch the Mickey Mouse ears around from front to back or vice versa, kind of like the gangs do in L.A. Does this mean Mickey is bi-coastal as well?

As for my transportation, I’ve got a “rot-proof” Carrot-Mobile. And then there are my hundred servants, bowing at my feet. As for the road, what started out as a Yugo and a tackle box has now become 35 fully packed trunks — can’t have enough props — in an 18-wheeler, and a tour bus.

I would have to say my major comedy influences are Jonathan Winters, (you just look at him and have to laugh), and Robin Williams, (I’m in awe. I wish I was THAT funny ALL the time). Don’t forget one of my favorites — George Carlin…the MASTER! He put out an excellent book called “Brain Droppings”, published by Hyperion. I highly recommend it. It’s just brilliant. As a matter of fact, it was so funny and insightful that I kept peeing my pants from laughing so hard, so I ended up having to read it again while sitting on the toilet!

I also love Gary Shandling. I want to be like him when I grow up…IF I grow up. I first got to meet him on the Tonight Show. Great guy. I later did a part on his show as the “Unwanted Guest” on HBO’s year-end roast. I’ve also made repeated appearances on Politically Incorrect. Bill Maher is another favorite. He’s not afraid to take chances and you are definitely not going to pull anything over on him. Very cutting-edge. And of course what comedian doesn’t wish his brain worked like Steven Wright’s?

As for other comedians I’ve appeared with, I recently did a new television special with Chris Rock. I really like working with Chris. In the television special I get to shoot him in the comedian gangster wars between west coast and east coast comics. (Note: This show has already aired.)

Musically, I love the Rolling Stones. They are the greatest. They put on one hell of a show. It’s a complete show. They just never stop…2 1/2 hours. A lot of people criticize them lately because they are all in their fifties. But hey, they’re still great. Now that’s longevity. Mick Jagger still has his big lips and Keith Richards not only looks like he’s dead, but really should be dead by now. Speaking of the dead, I love the Grateful Dead. They are all in their fifties, Jerry Garcia has a big head of hair and is also dead. Personally, I think they should rename the band to “Missing Jerry?”

I love Pink Floyd. You know, if you play Pink Floyd’s “Dark Side of the Moon” and the “Wizard of Oz” at the same time directly after the Lion’s Roar, they play in sync, now that’s trippy! I can listen to anything. I like Tom Petty and REM. Believe it or not, I’m a big Elton John fan, (just the older classics though), and I even like ABBA, (Shut up! They rock!) I listen to a lot of Smashing Pumpkins, Pearl Jam, Live, Rusted Roots, Phish, Widespread Panic… Generally anything but the freakin’ Hanson Brothers. There are too many great alternative bands to mention here. If you haven’t heard The Samples yet, do it soon — great sex music. Occasionally, I need a country fix and Travis Tritt takes care of that. And I’ll occasionally chill out and listen to Harry Connick, Jr. You have to admire a guy who knows everybody has seen his wife in a lace teddy and still remains cool about it!

My favorite movie is Arthur, but I also have a satellite TV now, so I don’t have to collect video tapes anymore. I can watch anything I like….. at anytime… With over a thousand channels, I sometimes go nuts sending the dish swinging back and forth between channels. I stopped collecting and watching tapes altogether because I’m not like a kid who can watch a Jim Carrey movie a thousand times in a row.

When I have free time I love to surf, (waves, the internet, channels, and don’t forget my jet-ski). Gary Propper, (my manager), is a former East Coast Surfing Champion and the first to have a surfboard model in his name by HOBIE SURFBOARDS. This led him into the entertainment industry and at forty-eight he has been non-stop for twenty-five years. Now he has a killer Noserider that’s made by Quiet Flight in Cocoa Beach, Florida. It is the hottest long-board out there. That Rules!

He is credited with discovering the comic book and formulating the ideas behind the feature film Teenage Mutant Ninja Turtles I, II and III, as evidenced by his leading screen appearance on the films. Those films have grossed over a billion dollars! Not that I’m jealous, but my film “Chairman of the Board” is only expected to gross about $300.

I love sports. I love watching football. I also get a kick outta watching boxing. I think the next prop I’m gonna make is a boxing glove with a couple of ears attached to it and call it the “Mike Tyson Chewing Toy”.

That’s pretty much me in a nutshell. Apart from my tattoo — I have a small carrot tattooed on my ankle. I’m thinking of having “The Last Supper” done on my forehead. I might have Newt Gingrich done on my butt, but that would be redundant. C-ya!!!!!

Cedric The Entertainer
Scroll to top