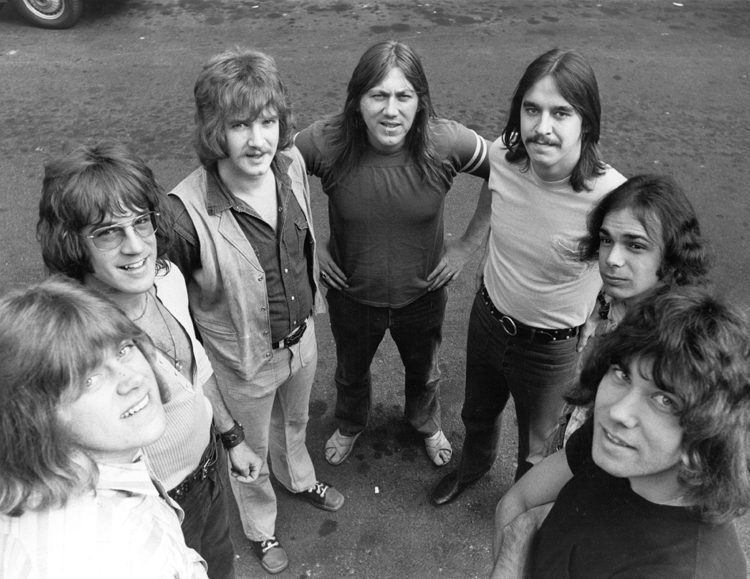 Spring, 2005. Chicago, the legendary rock ‘n roll band with horns, has written, recorded and performed some of the most popular and best loved songs in rock history. Through it all, they have remained a working band, releasing 29 albums and touring continually since forming in 1967. In 2004, Chicago joined forces with all-time R&B greats Earth, Wind & Fire for one of the Summer’s most successful and creative tours. In fact, it was such a successful double-bill that the two bands will reunite this June for more dates together. Both groups started in the city of Chicago and have achieved massive worldwide fame and record sales. Fans can expect to hear more than 3 hours of hits during the tour de force, which will begin and end with both bands playing onstage together. The middle sections will feature full sets from each band. The schedule will be available soon at: http://chicagotheband.com/tourdates.htm

Since the very beginning, well before all the hits started flowing, Chicago established a reputation for their powerful live show. Fueled by a passion for music, Chicago’s members exploded the conventions of what rock music could or should be. The result was a ground -breaking new form, played by extraordinarily talented musicians. Early fans like Jimi Hendrix and Janis Joplin were sufficiently impressed – they took the group out on their respective tours. Once the group began making records, fans rewarded the group with record sales of 122,000,000, 20 Top 10 hits, 5 number one albums, 5 Number One singles, and 5 Gold singles.

Of course, in 1967, when the original members gathered at Walt Parazaider’s North Side apartment to commit themselves to their fledgling group, success was then measured in more modest terms. Each member had learned a variety of styles while playing for the many different racial and ethnic groups that populate Chicago. This musical fusion struck the lovely chord that became Chicago. Paramount for this nascent group was creating a rock ‘n roll band with horns. At the time, R&B artists like James Brown were upping the ante for horn sections, but it had not been attempted within the context of a rock band.

Initially called The Big Thing, they hit the Midwest club circuit in 1967. In 1968, they began working with producer/manager James Guercio, who renamed them Chicago Transit Authority (soon simplified to Chicago), moved them to Los Angeles and signed them to Columbia Records.

Chicago Transit Authority, their double-lp debut (April, 1969), was an underground hit whose sales were fueled by their incessant touring. (“In those days, I think it was 360 out of 365 days a year touring,” remember Parazaider). Chicago II (January, 1970), another two-record set, contained their first two Top Ten hits, “Make Me Smile,” and “25, or 6 to 4.” Their debut album held two more belated hits and also two of the band’s most requested songs, “Does Anybody Really Know What Time It Is?” and “Beginnings,” both written and sung by Robert Lamm. A third double album, Chicago III (January, 1971) consolidated their success, and they topped it with a whopping four-disc boxed set live album, “Chicago At Carnegie Hall,” (October, 1971).

Chicago V (July, 1972) topped the charts for nine weeks and spawned the gold single, “Saturday In The Park.” Chicago VI (June, 1973) was Number 1 for five weeks and contained the hits “Feelin’ Stronger Every Day,” and Just You ‘N Me,” the latter a Number 1 in Cash Box and another gold single. Chicago VII (March, 1974) was yet another Number 1 lp whose hits included “(I’ve Been) Searchin’ So Long,” “Call On Me,” and “Wishing You Were Here.” Chicago V111 (March, 1975) had the group’s fourth straight chart topper, the nostalgic hit, “Old Days.” It’s small wonder that Chicago 1X – Chicago’s Greatest Hits (November, 1975) eventually sold five million copies.

But it was Chicago X (June, 1976), the recipient of three Grammy Awards, that featured the band’s biggest hit of the 1970′s: the worldwide Number 1 “If You Leave Me Now.” The lovely ballad catapulted Chicago into the highest levels of popular success. Another ballad, “Baby, What A Big Surprise,” was the major hit off Chicago X1 (September, 1977).

In early 1978, tragedy struck when guitarist Terry Kath was killed in a shooting accident. Devastated by the loss of their friend, the band nearly broke up, but eventually resolved to continue. To perpetuate Kath’s memory, the band created a permanent scholarship in his name at their alumni DePaul’s School of Music. Later that year, the band released Hot Streets (October, 1978), which became another million-seller. Subsequent release Chicago 13 (August, 1979) and Chicago XIV (July, 1980) brought the band to the end of its contract with Columbia Records, who then released Chicago’s Greatest Hits, Volume 11 (Nov., 1981).

Reaching the crossroads after 15 astounding years together might prompt some bands to consider retirement, but CHICAGO simply regrouped and recharged. They signed a long term contract with Warner Brothers Records, and then recruited veteran Bill Champlin and turned to producer David Foster. The result was the million-selling Chicago 16 (June, 1982), featuring the gold single, “Hard To Say I’m Sorry.” The band now routinely had a multi-generation audience, with a whole new generation of fans.

Chicago 17 (May, 1984) turned out to be a landmark success for the group. Propelled by the mega- hits “Hard Habit To Break,” and “You’re The Inspiration,” the album sold more than 7 million copies. Shortly thereafter, bassist/vocalist Jason Scheff, son of famed Elvis Presley bassist Jerry Scheff, joined the band and sang the Top Ten hit, “Will You Still Love Me?” from Chicago 18 (September, 1986). Chicago 19 (June, 1988) was another smash, featuring three top Ten hits, “I Don’t Wanna Live Without Your Love,” the Number One “Look Away,” and “You’re Not Alone.” A fourth song from the album, “What Kind Of Man Would I Be?” became a hit when it was included on Greatest Hits (1982 – 1989) (November, 1989), an album that remains a bestseller.

The ‘90′s have seen Chicago ‘s good fortune continue to grow. In 1990, Tris Imboden signed on as drummer and the band released CHICAGO Twenty 1 later that year. On July 23, 1992, Chicago was honored with their own star on the Hollywood Walk of Fame. In 1994, the rights to Chicago ‘s Columbia albums reverted back to the group, and they founded Chicago Records to reissue them.

Chicago ‘s next album was the delightful Night & Day (Big Band) (May, 1995) on Giant Records, on which the group lovingly revived Swing Era standards. The album won acclaim and respect for the reverent way these classics like “In The Mood,” and “Moonlight Serenade,” were ” Chicago-ized.” “Sing Sing Sing” featured the Gypsy Kings. A highlight of 1996 was Chicago’s headline performance at the Hollywood Bowl, playing with the famous Hollywood Bowl Orchestra.

In 1997, Chicago released the 30th Anniversary celebration record, The Heart of Chicago 1967-1997. It was here that the opportunities to work with Glen Ballard and celebrated composer James Newton Howard, as well as Lenny Kravitz presented themselves. The album was quickly certified gold, and featured the #1 AC hit, “Here In My Heart.”

In 1998, the band followed up with The Heart of Chicago 1967 – 1998 Volume 11, which represented another fresh collaboration, in this case with Roy Bittan of the E Street Band. That Fall, again working with Roy Bittan, the band released Chicago 25, their first ever holiday album. Chicago 25 was certified gold in 1999. With the addition of the six songs produced by Phil Ramone, Chicago Christmas: What’s It Gonna Be Santa? will be one of the hits of the 2003 holiday season.

In 1999, Chicago released Chicago 26, the group’s first live record since the epic Chicago At Carnegie Hall Vols I-IV. The reasoning behind the Chicago 26 was simple: Chicago’s current line-up deserved to be captured live and the results speak for themselves.

In 2002, Chicago signed an impressive pact with Rhino Entertainment. The first release, a 39-song, 2-CD career retrospective entitled The Very Best Of Chicago: Only The Beginning, debuted on the Billboard charts at #38, making Chicago the only American rock band ever to chart Top 40 albums in five consecutive decades – a milestone accomplishment. To date, Chicago has 41 Gold and Platinum awards. The Very Best Of Chicago was certified platinum soon after release.

In 2003, Rhino Entertainment released A&E Live By Request, a DVD that highlights a special 2002 performance by the band in New York City for the A&E network. On that evening, the Chicago took the stage without a preplanned set list, and allowed listeners across the country to phone or email song requests. Hosted by Mark McEwan, the electrifying show also featured guest appearances from Jay Leno, Dick Clark, and the cast of The Sopranos. Rhino has also released Chicago: The Box, a definitive 5-CD box set that includes a special archival live DVD, taken from a 1972 concert at the Arie Crown Theatre. In addition, Rhino continues to remaster and reissue all of the band’s works on CD, giving fans the very best sound and packaging possible Finally, there is the January ’05 release of Love Songs, a collection of Chicago’s most famous love songs, and in the Spring there will be a DVD release of Chicago and Earth, Wind & Fire together live from the Greek Theatre in Los Angeles.