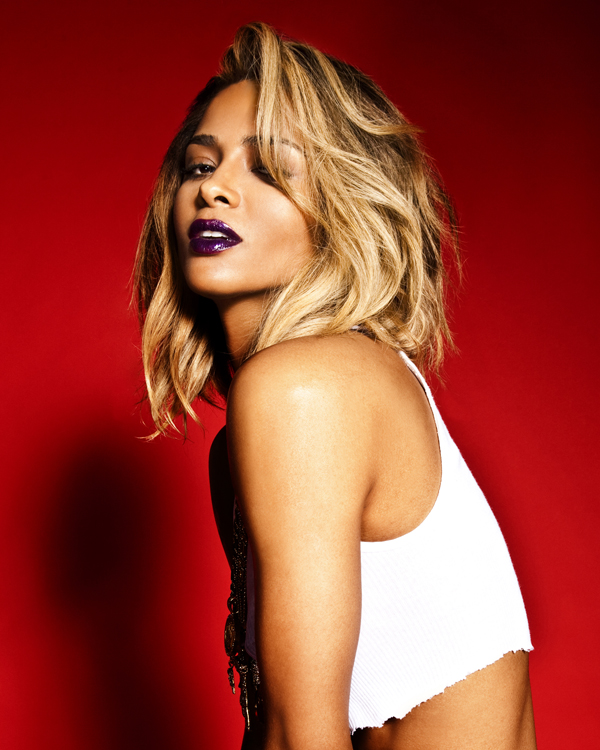 The title of her much-anticipated sophomore album says it all and as Grammy winning young superstar Ciara declares, “My second record is called “The Evolution” because I feel like I’m graduating to a whole new level creatively and musically. I co-wrote every song and co-produced many of the tracks on this record so it really reflects where I am as an artist. I had fun making my first album: with “The Evolution,” I had an actual plan of what I wanted to hear and the sounds I wanted on the record.”

Working with key hit-makers such as Pharrell Williams, will.i.am, Lil Jon, Dallas Austin, Rodney Jerkins, Polow and new players like Calvo and Brian Kennedy, Ciara – whose 2004 debut album GOODIES sold over three million copies worldwide – was involved in the selection of producers for THE EVOLUTION as well as the development of the songs, a couple of which (such as “Do It,” produced by wil.i.am and “Crush,” a Lil Jon jam) were written on the spot in the studio. “What was really cool was that a lot of the producers I wanted to work with felt the same way about working with me,” Ciara says. “Pharrell (Williams) said he had a song for me but when we got in the studio, we ended up writing a song from scratch which was “I Proceed,” a track with a lot of energy. A lot of the tracks on this album are energetic like “Make It Last Forever,” a real cool dance/party cut that Rodney (Jerkins) produced. He also did “Can’t Leave ‘Em Alone” which features 50 Cent. I toured with him so it was great having him on this record with me.”

The many music fans Ciara established worldwide through hit singles such as the three No. 1 singles – “Goodies,” and “1,2 Step,” and “Oh” – from GOODIES, her Grammy-nominated debut CD – have been eagerly awaiting her new CD, THE EVOLUTION, which includes chart and radio hit “Get Up” (from the “Step Up” soundtrack) and “Promise,” the Ciara-penned first single – with its steamy hot video directed by Diane Martel – another immediate hit for the singer/songwriter. “A lot of the music on this album was inspired by old school records. There was a way music used to feel and I wanted to capture that,” Ciara states. “I felt the inspiration from artists like Michael Jackson, Prince, TLC, Jodeci, Madonna: there was a certain groove I wanted to have and I think we got it on THE EVOLUTION. All I know is, it feels good with my soul!”

Other standouts on THE EVOLUTION include “Like A Boy,” produced by newcomer Calvo and co-produced by Ciara; “Crush,” a song co-written with Lil Jon (who played a key role in Ciara’s career by producing her massive 2003 hit single “Goodies”); “My Love,” co-produced by Brian Kennedy and Ciara which she describes as “a different kind of ballad, a song that speaks to the situation where a woman is basically telling a guy that she wishes he would have worked harder to keep the relationship going, that he didn’t make the effort. It’s hard when you’re giving 100% in a relationship but the other person is only giving 50%,” she says with the kind of honesty and realness that comes from someone who has had the experience herself. “That’s Right,” another Lil Jon production – which Ciara says “took me forever to write!” – has another message meant for the men: “You know, women have a tendency to alter their whole schedules for guys! This song is saying, ‘hey, I’m going to look out for me!’ and it’s real energetic like so many other tracks on this album.”

THE EVOLUTION caps an amazing two years for the Atlanta native who celebrated her 21st birthday on October 25, 2006, the same day the video for “Promise” made its debut on BET’s Access Granted: since the release of the GOODIES album in 2004, Ciara has earned four Grammy nominations (including Best New Artist), five ASCAP Awards for Songwriting, three Teen Choice Awards, two BET Awards, two MTV Video Music Awards, Two Lady of Soul Awards, a Vibe award and was given the prestigious “Entertainer of the Year Award” at the Soul Train Awards in 2005 (CHECK DATE). As a featured artist, Ciara has had the magic touch lending her vocal talents to Bow Wow’s “Like You,” Field Mob’s “So What” and Missy Elliott’s “Lose Control” which won the two a 2005 Grammy for “Best Short Form Music Video.”

“There have been a lot of emotional highpoints,” Ciara says of her meteoric rise to become one of today’s most popular young female artists. “I’ve been living my dream. Everything has been so great – winning a Grammy, having my first single go to No. 1, being named “Entertainer Of The Year” at the Soul Train Awards. It’s all made me even more motivated.” Certainly, motivation to find success in music was there from early days when Ciara – a self-proclaimed ‘military brat’ Ciara who lived in Germany, New York, California, Arizona and Nevada before settling in Atlanta in her mid-teens – set her sights on her dream and went after it. “I wrote down on paper that I had a goal to be a professional singer….I watched my peers around me and they were worried about who’s wearing what, going to school, trying to talk to somebody and I was like ‘I’m trying to be somebody. What can I do to get there as soon as possible?’ I had to sacrifice a lotta things and I think that was the key thing to get me there. I cut out going to the movies, I cut out hanging with my friends, I actually told some of my friends ‘This month we’re not gonna hang out or talk on the phone’ and I even cut out the boyfriend because I was really like, ‘I’m ‘bout to do this. I’m ‘bout to be on top.’”

After joining a girl group, Ciara left to go solo, nabbed a publishing deal and eventually hooked up with hot Atlanta producer Jazze Pha and Lil Jon, the ‘king of crunk’ who produced “Goodies,” the Ciara-Sean Garrett-penned song that would establish her as an instant hit-maker with music fans worldwide. The album GOODIES – filled with songs that dealt with real life issues as lyrical themes – became a best-seller in the U.S. and throughout Europe and Asia, spawning hits with ““1,2 Step” and “Oh” alongside key album cuts like “Thugstyle” (co-written with Johnta Austin), “Looking at You,” Pick up the Phone,” “And I,” and “Ooh Baby.”

With impressive videos that also displayed Ciara’s skills as a dancer, the GOODIES album caught fire leading to shows in the U.K., Germany, Japan and Nigeria (where Ciara appeared alongside Beyonce and Jay-Z in 2006); Ciara also toured with Gwen Stefani (which Ciara says was “really cool getting exposed to her audience”) as well as being the only female artist on the 50 Cent, Lil Jon and Ludacris ‘The Massacre’ 2005 tour. “It’s been really cool to have all this happen on my first time around and I want to tour so much more in 2007. Being on the road, I’ve met people who tell me that my music inspired them in some way. When I think about the last few years, I think one of the greatest accomplishments I’ve had so far is being able to touch people with my music…”

With the release of THE EVOLUTION, that’s something Ciara intends to continue to do: “I want people to feel my energy! With this record, it’s about bringing people into my world a little more. That’s why it’s more personal than the first album. I’ve been fortunate because I’ve been able to be really involved and have responsibility for this record from all aspects. I feel like I have had no limits or boundaries as an artist with THE EVOLUTION…and now there’s so much more I want to do!” Ask the upbeat young entertainer just what she wants to achieve and she quickly reels off a list of goals: “Of course, I want to have longevity, become an icon!” she laughs. “I want to start my own label, have my own clothing line, get into movies. I just started my own dance agency. Oh…and I want to sell millions of records!”

Ciara – who credits Michael Jackson as her “ultimate inspiration” and his sister Janet Jackson as another key artist for whom she expresses “so much respect for all she’s done and whose level of success is something I want to have doing my own thing” – already has had a pretty good start with the millions of sales she’s had with GOODIES! Now with THE EVOLUTION, spurred on by the response to “Promise,” Ciara can expect an even greater response: “I’ve learned so much and I feel like I’ve continued to get better with everything I’ve done in the last two years. I’ve been blessed to have friends and family who have been so supportive. I appreciate all that has happened and now I feel like I’m going to a whole new place with my evolution in fashion, dance and in my music.”