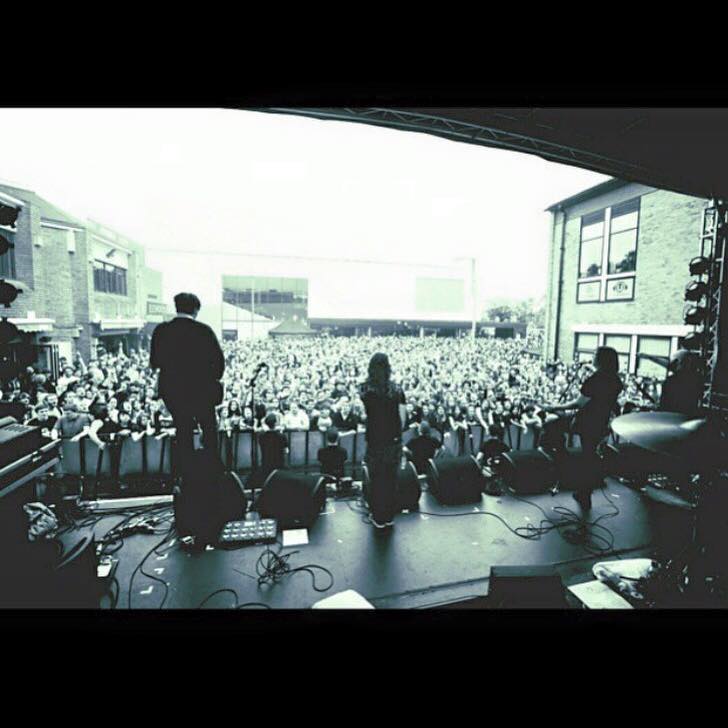 Finch’s first full-length album “What It Is To Burn” (2002) not only went gold, but helped mold a new genre of music while doing so. Not comfortable to sit and stagnate, the band has matured artistically and continues to push boundaries. With their new CD “Say Hello to Sunshine,” Finch allowed for maximum creative freedom for the recording process and took a year in their hometown of Temecula (60 miles north of San Diego) to make something uniquely Finch. The band welcomes new drummer Marc Allen to the line-up and looks forward to bringing the new material to life with months of worldwide touring ahead.

Finch on Finch: Has Finch gone soft? Why call the CD “Say Hello to Sunshine”? “It’s satire,” says singer Nate Barcalow of the title. “We hope this record is going to rip your face off.”
Why was the recording session a year long? Explains Derek, “It took a year to finish the 15 or 20 songs we recorded. Sometimes we’d take two weeks to work out one song before laying anything down.” Continues Nate, “We threw away a lot, but as we kept writing, it became clear which were the stronger songs.”

Where was the CD recorded? It was recorded between San Diego and Los Angeles at Big Fish, Music Friends, Jordan’s Old House, Signature Sound and Ocean studios.

Who was your producer and how did you end up choosing him? Says Nate, “We had a specific idea of what we wanted to do, but we just didn’t see eye-to-eye with anyone until (band friend) Jason (Cupp).”

Who Mixed the CD? Rich Costey (Mars Volta, Doves, Muse) mixed “Ink,” “Bitemarks & Bloodstains” and “Miro” at Avatar. The rest of the CD was mixed at Chalice by Jason Cupp.

What are some of your favorite songs lyrically? Nate explains, “A lot of the songs on this CD are more personal to me than the last record was — I wrote things that no one else but me could even tell are personal. I touched on things I never explored before.” For example, “‘Hopeless Host’ is about my body not being a very good host for health. ‘Piece of Mind’ is about a guy getting a lobotomy, because society is going downhill and he can’t take anymore.”

What about (the first single) “Bitemarks & Bloodstains”? “It’s the first song we wrote for the new album,” says Nate. “‘Bitemarks’ makes the transition between the old and the new sound.”
How should people approach the listening of the CD? “The album as a whole,” says Nate, “is supposed to create a certain atmosphere in your mind, a feeling or a vibe. The best music does that for me. Hopefully, Finch does that for other people.”

What were the influences for the new record? “There are songs that remind me of Faith No More, Alice In Chains, STP or Nirvana, but I didn’t intend for any of those influences to come into play, they just sort of crept in there,” Nate explains.

What was the band’s motivation to grow? Alex explains, “If we wrote ‘What It Is To Burn II’ It would have been swallowed up by everything else that’s out there now.” Adds Nate, “Things change, time passes… We just want to make every CD something new.”

How would you describe the group’s current mood? Randy says, “We had to go through a few changes for a while, when we didn’t feel like a band. Then Mark came in and ever since, it made a big difference. It makes us real again.

As the newest member of the band, what were your thoughts on the new material? “This new material was something I was really into playing.” Marc states, “It sounded like a side-project. It was surprising how different it is from what I expected.”

What were you trying to accomplish with the CD? Randy says, “Trying to make this album new and different and I think we accomplished it.”

How would you describe the bands relationship with fans? Randy explains, “We have a good relationship with our fans. I don’t ever feel there’s any sort of distance between us. When I talk to them, I try to knock down barriers and it’s like hanging out. You see these people at the shows and you develop relationships with them. I am a fan myself and it’s just not an option to be a fucking weirdo. We’re just kids that like music and we try not to snub other people and put ourselves above them.”

What’s next on the tour front? A short US tour, followed by European (Germany, UK, France) festivals. When the band returns to the US, they will embark on an extensive tour.

How about the rest of the world? “Sometime we would like to tour the world… Brazil… Central America… That would be a real accomplishment,” says Alex.

What’s the most important thing you want people to know about this band and this album right now? Explains Randy, “The new CD is completely different from the last one and different from anything else out there now. When we made this album, we worked hard to do something new and great — to open some eyes. That’s what every musician should try to do and not try to ride the bandwagon.”

The Adolescents
Scroll to top