You are here: Home1 / Exclusive Asian2 / The Adolescents 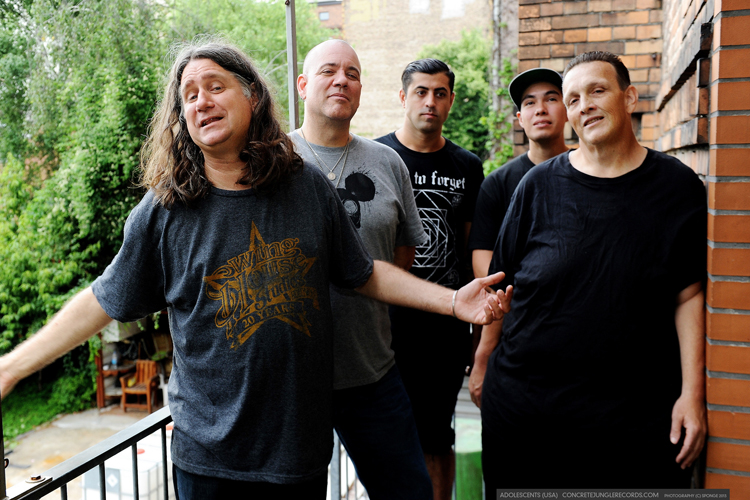 The Adolescents were formed in early 1980 by after bassist Steve Soto had left Agent Orange. The line-up, at the time, consisted of frontman Tony Cadena, with Steve Soto on bass, Frank Agnew on guitar, John O’Donovan on guitar and Peter Pan on drums. Both O’Donovan and Pan left in June. Later that year, the group released the classic hardcore single “Amoeba” on Posh Boy Records. The track also appeared on the Rodney on the ROQ compilation, assembled by L.A. DJ Rodney Bingenheimer.

The Adolescents signed with Frontier Records in January 1981 and recorded their debut album, “The Adolescents”, the following month. It quickly became one of the best-selling California hardcore albums, behind the Dead Kennedys’ “Fresh Fruit for Rotting Vegetables”. Despite this success, Rikk Agnew left the band. He was replaced by Pat Smear, who would later go on to join the classic alternative/grunge band Nirvana during its final years, and then Foo Fighters, although he had left that band to go solo). The Adolescents broke up during the fall of 1981 while all members of the band were involved with their own projects.

After no activity at all between 1982 and 1985, The Adolescents returned in 1986 without Casey Royer, who had just formed a new project called D.I., and Frank Agnew. The band recorded their second album “Brats in Battalions”, which was released in 1987, with Sandy Hansen on drums and younger brother Alfie Agnew on guitar. Also by the end of 1987, Cadena left the band and Soto took over on lead vocals. They released their third album “Balboa Fun Zone” in 1988 to poor reviews and Frank returned to the fold. Uncomfortable with the idea of continuing without Cadena, The Adolescents decided to break up once again in April 1989. Since then, all members of the band had continued to make music and went on to play in numerous bands such as D.I., Christian Death, the Flower Leopards, Abandoned, ADZ, Legal Weapon, TSOL, 22 Jacks and Manic Hispanic as well as providing backup work for solo projects by Joey Ramone and Jane Wiedlin.

After Soto’s post-Adolescents project 22 Jacks became less active by the end of 2000, the band reunited in 2001, with the “Blue Album” line-up, for a 20th anniversary tour. Casey Royer and Rikk Agnew soon left the band to concentrate on their own projects. Royer was replaced by former Social Distortion drummer Derek O’Brien. After numerous guitarists (including Bad Religion/Circle Jerks’ Greg Hetson and Social Distortion’s Jonny Wikersham) were auditioned to replace Rikk, the band opted to have with Frank’s son Frank Jr. take over where his uncle had left off.

As the band continued to tour more actively in most of 2002 and 2003, The Adolescents felt it was time to start writing new material. The process took some time since the band members were still involved in their own projects and work on their first post-reunion album meant a year long work for The Adolescents. Titled “O.C. Confidential”, it is their first original album in seventeen years (since 1988′s “Balboa Fun Zone”). The album finally arrived in the summer of 2005 and was a return to their old style back on their first album. The band spent the second half of 2005 and 2006 on the road. Frank Jr. left to continue school and was replaced by Matt Beld (Los Infernos, Cadillac Tramps). Dating back to the time that Soto had teamed up with Beld to produce the first Los Inernos album, his playing and energy help make an already powerful live show that much better. The Adolescents are still together, as of the date of this writing, and still enjoy their moderate success. The band is now gearing up for their follow-up to “O.C. Confidential”.