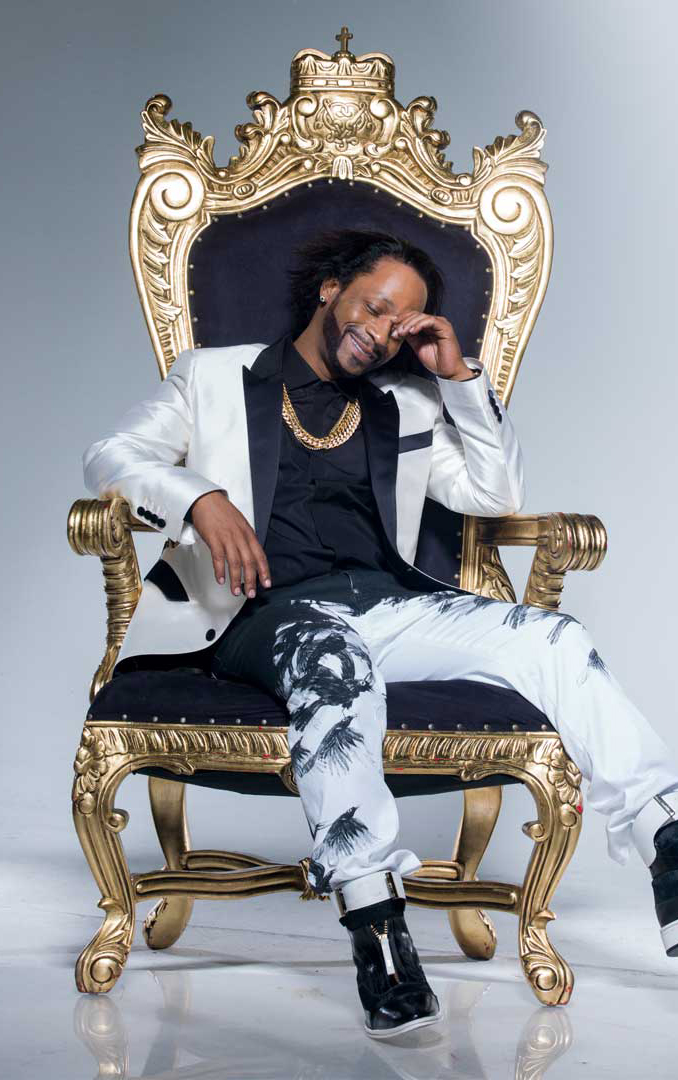 “My goal is to build a comedy empire and help restore dignity to our profession. It’s the best I ever feel when I’m on stage. Putting the thoughts from my head into those of an audience. Applause is my drug of choice.” – Katt Williams

Comedian Katt Williams is known just as much for his permed hair as he is for his animated performances and quick wit. Katt has been making his mark in Hollywood for over 10 years. Beginning his career at an age when most teenagers are seeking their driver’s license, the young comic quickly discovered that he had a gift for making people laugh.

Katt Williams in the 90s

Born in Cincinnati, Ohio and raised in Dayton, Katt Williams was the product of a socially and politically charged household. His parent’s influence and teachings may have caused him to briefly join the Nation of Islam. Being that educational excellence was greatly encouraged from birth, the tiny protégé was reading at age 3. An avid book lover, Katt’s parents banned him from reading as a form of punishment when he got into trouble.

When he was 12, he won a number of awards for science projects. That landed him a full scholarship to The National Science Academy in Dayton. He purposely failed a math test in order to be disqualified from participating in the program. “I was young. You know when you are young, you just do what you do. I can use my I.Q. now. I had a high I.Q as an 8 years old. So you know what was I gonna do with it. I was just trying to be impressive and not mess up.”

Longing to express his creative side, Katt escaped into his own world. He began compiling fresh jokes with fresh music. As a means to get into a nightclub where he was underage one fateful evening, Katt noticed that they weren’t checking ID’s in the line for comics. “I was so nervous but everyone laughed and thought I was funny. After that I was opened up to the wonderful world of comedy,” recalls the multi-talented entertainer. “Improv is where a comic really gets to shine, if he is good. That’s as close as a comedian can get to the playoffs. I went through those years were I wanted to be the funny comic, now I’m trying to be the greatest comic of my time.”

In 1999 Katt became a presence at The Improv, The Comedy Club, The Icehouse and even had his own room at The Hollywood Park Casino where he had a large, loyal following. He’s become somewhat of a staple comedic force on the BET Network, appearing on shows such as Comic View, Rip the Runway, Black Carpet, Rap City, 106th & Park, The BET Awards and BET Comedy Awards. Throughout his success he has been massively embraced by the Hip Hop community, receiving praise from Master P (“Hands down Katt Williams is the next Richard Pryor”) and Snoop Dogg (“Katt is doing his comedy thing so flamboyantly and so fly with spirit of the late great Red Foxx and the spirit of Richard Pryor”).

Recently Katt hosted the 1st Annual BET ‘Hip Hop’ Award Show from The Fox Theatre in Atlanta, Georgia. In his role as host he received an overwhelmingly positive response from critics and had a chance to speak directly to Hip Hop audiences globally and share his insight on urban culture, folklore, lifestyle, history and music. More than a musical style, hip-hop is a history of American culture, and a testimony by its artists of their life experiences. The Award Show was an electrifying evening of non-stop homage and entertainment to the genre of Hip Hop music. Performances included Snoop Dogg, Ludacris, Young Jeezy and T.I. while Award Nominees include everyone from Common and Busta Rhymes to DMX and Jay-Z.

Katt Williams’ talent extends over multiple mediums. Known to most for his breakout role in three seasons of Nick Cannon’s highly-rated MTV improv show, “Wild n’ Out,” the funnyman has appeared in music videos for everyone from Outkast (“Roses”) and Ludacris (“Stand Up” & “Number One Spot”) to E-40 (“One Night Stand”) and Lil’ Kim (“Shut Up/Lighter’s Up”), in addition to landing roles on the small and big screen. Some of his appearances include ‘NYPD Blue’, UPN’s ‘Girlfriends’ and ‘Cuts’, ‘The Tracy Morgan Show’, ‘Wanted’, ‘My Wife and Kids,’ Russell Simmon’s HBO ‘Def Comedy Jam’ alongside Dave Chappelle and Mike Epps and an animated character (“A Pimp Named Slickback”) on the popular adult cartoon The Boondocks.

Katt also prepares to co-star in MTV’s new half-hour improv series “Nick Cannon Presents: Short Circuitz.” The show will feature topical sketches, impersonations, parodies and other comedic elements. Other cast members include Nick Cannon, Affion Crockett, Eliza Coupe, Leonard Robinson and Taran Killam. It is set to premiere in first-quarter 2007 as part of the network’s “10 Spot” lineup. Katt continues to receive stamps of approvals from the urban and mainstream community alike for his brilliance and ingenuity on screen and on-stage including being named “hottest new comedian” in Rolling Stone Magazine as well as praise from African American comedic icons such as Steve Harvey who says, “He’s one of the hottest comedians in the country.”

HBO aired “Katt Williams: Pimp Chronicles Pt.1.” 60 minutes of hilarious new material from the entertaining comedian taped live in Atlanta with guest appearances from Cam’ron, Lil’ Jon, Snoop Dogg, Andre 3000, Da Brat and Anthony Anderson to name a few. The show is currently the highest rated special on the HBO Network for 2006. The DVD will be distributed through Universal Home Video in Winter 2006.

Katt’s prodigious talent seems to know no limits and he’s eager to add the title of ‘Hollywood Actor’ to his repertoire. In early 2007 he will light up the big screen with unforgettable roles in the Eddie Murphy film “Norbit” (Dreamworks) along with other stars including Cuba Gooding Jr., Eddie Griffin, Thandie Newton and Charlie Murphy as well as the soon to be hit romantic comedy, “Perfect Christmas” (Flavor Unit Productions) featuring Terence Howard, Queen Latifah, Morris Chestnut and Gabrielle Union. Towards the end of 2006 Williams will travel to Australia to begin filming the upcoming comedy “Fool’s Gold” (Warner Bros. Pictures) featuring Matthew McConaughey and Kate Hudson as the pair reunites on an international treasure hunt. Katt remarks, “I’m on the grind 23/6. The blessing now is that I got the gift and I got the thing to work the gift and I got the reason to be working.”

While his goal is to build a comedy empire and restore dignity to his profession, Katt Williams is also a humanitarian. He is as committed to his children as he is to his work. He doesn’t joke when it comes to them. “I have eight children, seven adopted. When my son Micah was born, it changed my life. Every week when I’m able to clothe and feed my family, pay my staff and travel around the world solely on the strength of comedy. That is my greatest accomplishment.”

Telling jokes with ease, the stand-up comic/actor wants to conquer the globe’s problems with laughter. “Everything, everywhere is comedy material. To watch and view the world via television, newspapers, movies and music translate our world into funny. There is no subject where funny doesn’t exist.” The current Los Angeles resident has undoubtedly become a fixture on the comedic and Hollywood landscape with more than enough charisma and talent to spare. Possessing the ability to make millions of people laugh, Katt Williams is healing the world one smile at a time. Katt sums it up best, “I’m in the great comedian lane. Once you’re in that lane, that’s just the beginning of it. The getting there is the journey.”