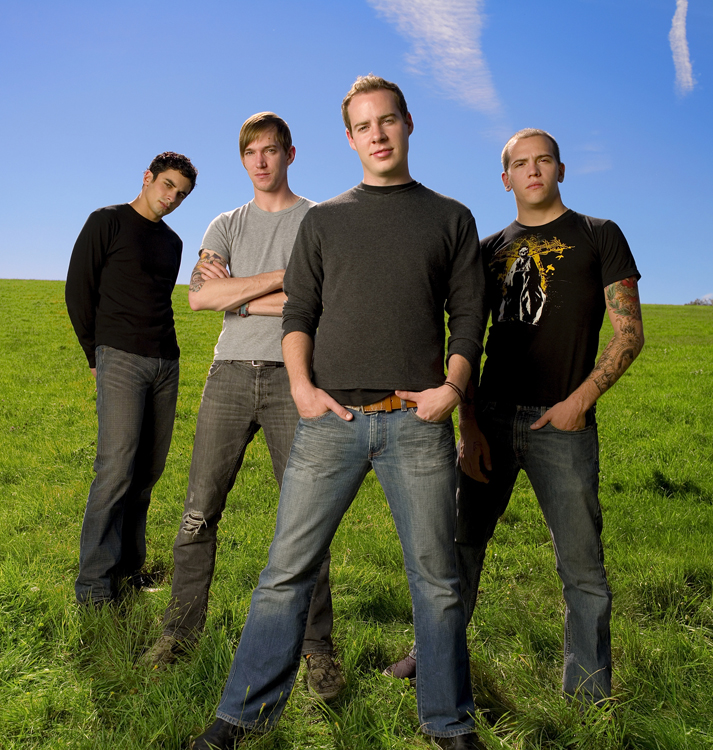 “Third time’s a charm, but would we even get that far?” – 14Balloons

Allow us to introduce Poughkeepsie, NY’s MATCHBOOK ROMANCE, once known as The Getaway. These four young men rock so well that Epitaph Records had to pluck ‘em right off the Internet. “The Internet really played and plays a major part of our success as a band,” says bassist Ryan Kienle, weeks before the band lets the leash off West for Wishing, their debut EP. A taut, five-tune taste of an LP to come later this year, WFW is ripe with layered emotional-hardcore melodies and sharp, passionate, pop song-craft. Further, it’s the fruit of unmerciful self-promotion via the Internet. Here, Kienle relates “the whole freakin’ story.”

The band’s genesis dates back to 1997, with he and vocalist/guitarist Andrew Jordan in various incarnations of different bands. One such band, Fizzlewink, coughed up a DIY disc in February 2001. Midsummer of that year, Kienle says, “is where things get interesting.”

The band added a third guitarist, Ryan “Judas” DePaolo” and drummer Aaron Stern and re-christened themselves The Getaway. Kienle credits DePaolo as adding “amazing background vocal and guitar ideas” which cemented the band’s sound, a juxtaposition of singing and screaming within a marriage of pop melodies and pulsing, careening rock rhythms. “[We] bring a lot of emotion and power to the music,” Kienle says. “something we thrive on as a band. We bridge the gap, taking the best of [pop punk and screamo] and making something of our own. We reach for that solid hook but, at the same time, try to work in that crazy offset that little extra kick to the song.”

Armed with a modest bouquet of six tunes, the band, all confessed computer geeks, constructed a website and began a relentless word-of-mouth crusade, drumming up links and mailing list subscriptions by networking with other unsigned U.S. bands they admired and the several hundred fans that would frequent the band’s performances.

Says Kienle, “We were promoting all our shows over punk sites and mailing lists and other bands’ guestbooks and message boards…putting our music up on MP3.com all of that. We really pushed it hard…told everyone we knew and had them tell everyone they knew about our MP3s and our website. It started drawing massive traffic and things just started taking off. From September to December, we played almost every single weekend, [sometimes] two shows a weekend, all throughout the northeast.”

Payday came when Epitaph honcho/Bad Religion guitarist Brett Gurewitz, trawling the ‘Net for the band with that Special Something. After reading a particularly enthusiastic post on www.punknews.org, Gurewitz downloaded the band’s track “Ex Marks The Spot.” Dazzled, he emailed Jordan to express interest. Jordan thought it a cruel, cruel joke. “Andy emailed all of us asking who was messing with him and [said], ‘it’s not funny [to] joke around about this crap.’ We had no clue what he was talking about. So, Andy emailed Brett backed saying its messed up if this is a prank and if not, you can call me.

Of course, the phone rang. Kienle, Jordan, Stern and “Judas” flew west and a deal was both proffered and signed with gusto. This, on the merits of a rough, six-song demo. “That’s when we knew it was for real. We were all blown away.”

Gurewitz returned the band now, due to legalities, called Matchbook Romance to Yorktown Heights. Charged with writing the new LP, the band tries to maintain focus as tour possibilities, including that golden ticket of summer jaunts, the Vans Warped Tour, are bandied about.

“From the day we got home, we’ve been writing as much as we can, trying new things, experimenting musically, trying different songwriting processes,” says Kienle. “[We’re] just focusing on writing the best album we possibly can.”

Not that they don’t indulge in a little reverie…“It really is a dream come true. It just feels like we started something that can’t be stopped We are using an awesome producer [Joe Barresi; Queens of the Stone Age, Pennywise, Weezer, The Jesus Lizard, Melvins] for our full-length and a punk legend [Brett Gurewitz] produced our EP! It’s like living inside a dream and I never want to wake up. I think that one statement kind of says it all.”

Tower of Power
Scroll to top