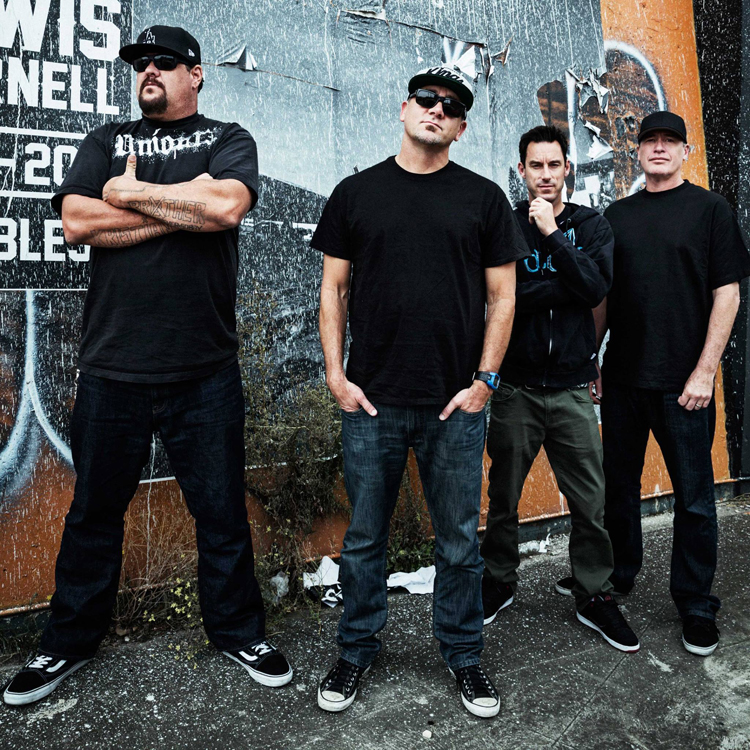 In the ever turbulent world of punk rock music, New York City claims the Ramones and Los Angeles proudly boasts PENNYWISE, the most significant hardcore band to emerge from SoCal punk’s second wave.

A thriving, ground-breaking punk rock band for over 20 years, the Hermosa Beach group has seen members come and go but it’s relentless, in-your-face, middle finger in the air, anthem-chanting sound has never wavered one iota.

The genesis of PENNYWISE can be traced back to the South Bay 1988 when punk couldn’t be less popular and metal ruled the roost. The four original members of PENNYWISE immediately crafted a style all its own—a tidal wave of California hardcore, melodic surf punk and optimistic anthems that went against the seek-and-destroy ethos of its era.

PENNYWISE would go on to build an international following through relentless touring. A no nonsense band best-known for its pounding rant “Fuck Authority,” searing soul-searcher “Alien” and its ode to brotherhood, “Bro Hymn,” an autobiographical song that pays tribute to its founding bass player, Jason Thirsk, after his tragic death in 1996. The band recently enjoyed its most significant success to date, with their top 20 single, “The Western World” which dominated at KROQ 106.7, L.A.’s No. 1 modern rock station.

Most recently, Ignite vocalist Zoli Teglas joined the PENNYWISE fold replacing the band’s former vocalist Jim Lindberg. Teglas, a longtime friend and tour mate, made his PENNYWISE debut playing a handful of local shows including the 2009 Smokeout Festival and a sold out Holiday Benefit concert for Amnesty International at Long Beach Arena.

Bassist Randy Bradbury explains, “What started out as a temporary position was just too good to put an end to. Zoli brings to the table a tremendous vocal ability, creativity, and a die hard work ethic. There is a bond that makes this change feel like it was simply meant to be, and considering the recent unfortunate events, having Zoli join the band is a well needed shot of positive energy.”

Teglas was excited to take the stage with his friends, noting, “I’m stoked to be singing with Pennywise. I’m a huge fan of the band and am super grateful to share the stage with my long time friends Fletcher, Byron and Randy.”

Left without a singer during summer of ’09 some questioned the future of PENNYWISE but they should have known better. Calling it quits was never in the cards for the remaining members.

“There was a time after we lost Jason that we thought about giving up, but we would have been hypocrites,” Dragge noted. “Our music has always been about persevering against all odds. We love this, we love going on the road. There’s nothing more important to me than being on stage in front of our fans and having them sing our lyrics back at us and feel the energy. This has become so much bigger than just us as a band. It’s become a family and a brotherhood of people that I feel depend on us. I’m still here to continue to deliver the message as are Byron and Randy. Our motto is to follow your dreams and pursue them. Don’t waste time because if you’re wasting time on something you’re not into, then you’re not living. We’re going to go out there and have fun doing what we love until it stops being fun.”

A punk rock Hall of Fame band if there ever was one, the story of PENNYWISE is hardly done. With a brash new chapter of the band’s story unfolding before our very eyes, a new record is in the works, as are a U.S. and overseas tours. PENNYWISE doesn’t play by the rules, it plows straight ahead and makes its own.

“We’ve always done things our own way,” Dragge declares, “and we’ve never taken no for answer. We’ve been a punk band for over 20 years, and we’ve traveled the world, and we’ve had a lot of people tell us what we could and couldn’t do. Tell me what we can’t do, and I’ll try twice as hard to do it. That’s the one thing this band has taught me; if you want it bad enough, you can have it.”