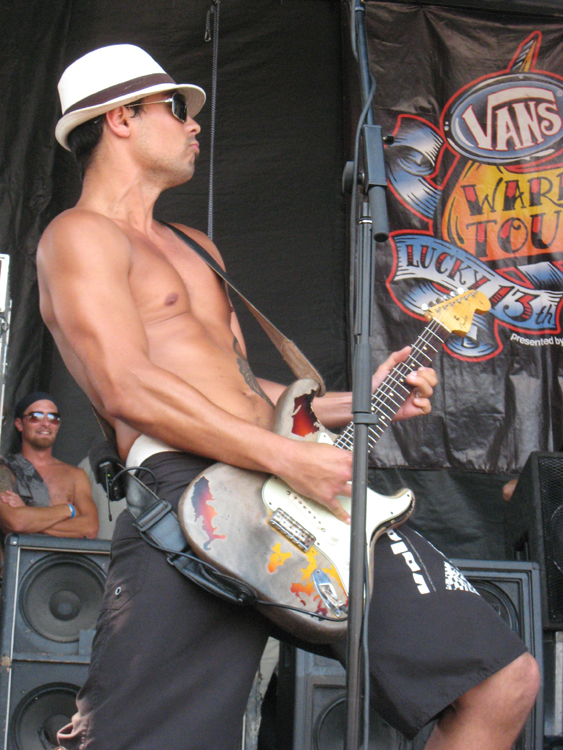 PEPPER, comprised of guitarist/vocalist Kaleo Wassman, bassist/vocalist Bret Bollinger and drummer Yesod Williams, formed in Kailua-Kona on the Big Island of Hawaii in 1997. Having grown up surfing on the island, it’s not a wonder that they would mix their rock “shock and ah” flare, along with their mellow island rhythm roots to create their own truly diverse sound. They have also been known to hypnotize fans of all walks of life with their incredibly sweet harmonies all the while keeping bodies moving on the dance floor. The trio played mostly house parties and garages before finally shipping out to San Diego, CA in 1999 to push their first studio release Give’n It.

In 2001, they entered the Volcom warehouse studio with Steve Kravac (Blink 182, Less Than Jake, MxPx) to record Kona Town, which included the hit single “Give it Up (Dirty Hot Sex)” – which has become one of KROQ’s most played songs to date. On the heels of that success, PEPPER retreated into The Hive, a completely analog studio and home of 311, with legendary producer Ron “The Saint” St. Germain (Bad Brains, Living Colour, 311, Tool, Sonic Youth, Soundgarden) to record In With the Old. When the dust settled from the flurry of large-scale tours, the band recorded the expansive No Shame (originally released by Warner Bros.), which featured a slew of exciting producers including 311’s Nick Hexum, No Doubt’s bassist Tony Kanal and current partner in crime Paul Leary of the Butthole Surfers.

PEPPER has sold over half a million records independently and founded their own record label, LAW Records – through which three other artists’ music is distributed: IRATION, Passafire, and The Supervillians. Their music has appeared in many movies (including Forgetting Sarah Marshall and Good Luck Chuck), television shows and video game soundtracks as well as having had a number of album tracks appear on Billboard’s “Alternative Songs” chart (including No Shame’s “No Control,” which peaked at 18, and “Give It Up” which peaked at 34). Their song “Your Face,” also from No Shame, is now available for Guitar Hero World Tour.

The band has also amassed a large and loyal following stemming from their non-stop touring which includes numerous rounds on the Vans Warped Tour and outings with reggae legends The Wailers, 311 and Snoop Dogg, to name a few. PEPPER has performed at several festivals including Lollapolooza, Mile High Festival, West Beach Music Festival, as well as many others. In 2008, PEPPER made the rounds through Europe twice alongside Flogging Molly in the spring and Less Than Jake in the fall. They spent their summer of that year celebrating the July release of PINK CRUSTACEANS AND GOOD VIBRATIONS, which peaked at 11 on Billboard’s “Independent Albums” chart, by hitting up US amphitheatres with longtime friends Slightly Stoopid, and headlined the very first “Here Comes the LAW Tour” – which featured other Law Records artists, The Supervillains and Passafire. The madness continued through the spring of 2009 when PEPPER ventured out for the second time co-headlining the Jagermeister Music Tour with punk rock legends, Pennywise. In the fall PEPPER took the party to the streets of Los Angeles playing the second annual Sunset Strip Music Festival with rock legend Ozzy Osbourne.

After spending the early months of 2010 writing and recording new music, PEPPER spent their summer on the annual Unity Tour with long time friends 311, and The Offspring. They played twenty-five big dates including several amphitheaters and arenas. Most recently the boys tackled 45+ major market national headlining tour in the fall of 2010 in support of their Sitches EP and completed an all acoustic tour up and down the west coast in early 2011.