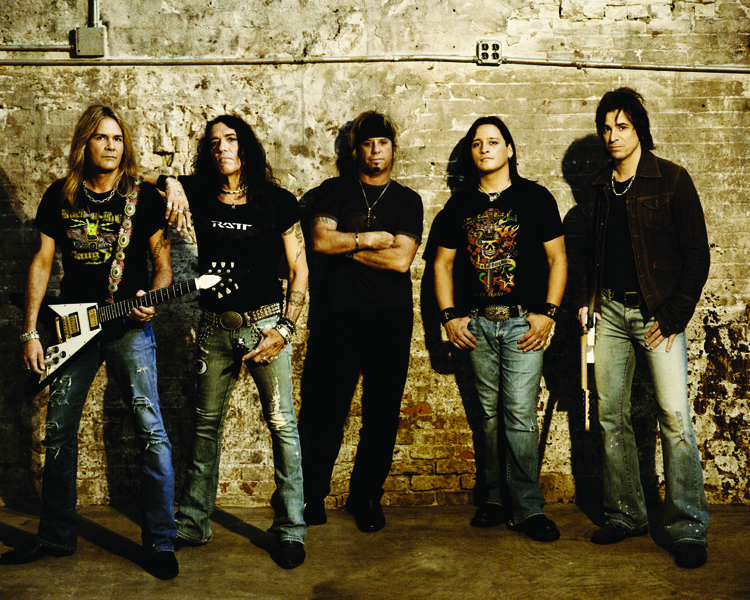 It happens all the time. Popular bands break up, then years later they reunite and sadly wind up sounding little like the turbo-fueled entities they once were when they started. Then there are the rare exceptions – like Ratt.

As the story goes, Ratt helped pioneer Hollywood’s legendary Sunset Strip sound and scene. The band has returned sounding fired up and better than ever. Ratt’s first studio album in 11 years, Infestation, is a return to their heavy, riff driven roots. The band has reinvented their sound by rediscovering their strengths, shuttling listeners to a time when metal ruled the earth and real musicians wore eyeliner like a badge of honor.

“We wanted this to be like something that we would have written right after [1984’s] Out of the Cellar, says vocalist Stephen Pearcy. “We definitely went back to basics with the mindset of a band with a lot of excitement and some great songs to get out.”

Right out of the box, Infestation ignites like gasoline to an open flame, bursting with an energy and attitude absent from metal for years, unheard, perhaps, since before the dawn of DVDs, grunge and Facebook. Album opener “Eat Me Up Alive” slaps you in the face with attitude and a timeless riff that has been a staple in Ratt’s music and has set them apart from the pack. From the strip pole gyrations of “Look Out Below” to the keg party anthem “Take a Big Bite,” Infestation rages with a life and energy that Ratt is famous for.

Yet Infestation is more than a party album. While the music is a glorious celebration throughout, some of the lyrics are serious and sobering, weighing the benefits of monogamy versus the thrill of rampant hedonism without being preachy or judgmental. On “Take Me Home,” Pearcy declares, “I’ll tell you a little secret that you need to know/ you’re always in my heart, always in my soul.” Then, in “Garden of Eden,” his alter ego brags: “I got a bad reputation and you knew it so well/ yeah, I’ll give you what you need/I’m gonna take you to hell.”

“I was not in that good of a place emotionally when we were writing this record,” admits Pearcy. “Sure there are sexual innuendos and party stuff, but there are also songs that deal with some very real issues. The lyrics meant so much to me that every morning for weeks prior to recording, I would wake up and rewrite. It was a strange process for me, but it worked.”

Ratt started writing Infestation in January 2009, and by April they had 20 new songs, which they refined with producer Michael “Elvis” Baskette (Chevelle, Alter Bridge). But before they could even start the shiny metal wheels rolling, they had to secure their lineup and repair years of enmity that developed when Pearcy abruptly quit for personal reasons in 1999. It was a rough era for Ratt. Pearcy was replaced by vocalist Jizzy Pearl and John Corabi took the second guitar slot, replacing original axeman Robbin Crosby.

Founding drummer Bobby Blotzer and bassist Robbie Crane, who has been a mainstay and driving force in the band since 1996, remained constant, though while Ratt worked hard in the early ‘90s, they purposely stayed on the road and out of the studio.

“We decided not to pursue recording a Ratt record when Stephen was out of the band,” says guitarist Warren DeMartini. “We definitely wanted to retain that same lineup for a long time, but life comes along and changes those plans. Stephen quit the band, and we didn’t want that to mean the end of Ratt.”

After some serious discussions, Pearcy rejoined and in 2007, DeMartini, Pearcy, Blotzer and Crane took the stage together for the first time in eight years, playing over 50 dates, and releasing the best of CD Tell the World: The Very Best of Ratt. Also, they released their first ever DVD RATT Videos from the Cellar: The Atlantic Years. The shows were a telling precursor of what was to come. “That tour was really exciting and refreshing because the sound was back, and even better,” DeMartini says. “Stephen had grown, we had grown, and with those pieces restored, we knew we could get back to writing.”

With a bunch of shows under their belts, Ratt were eager to get back into the cellar and write some new songs, but they wanted to add to their lineup. DeMartini suggested ex-Quiet Riot guitarist Carlos Cavazo to round out the lineup. Cavazo, a well known, accomplished lead player gives Ratt the twin-guitar attack and credibility they had in the early days with Crosby.

“I thought of bringing in Carlos a couple years before it actually happened,” DeMartini says. “At the time, we thought we were going to be replacing John because of conflicting schedules and I started thinking it would be cool to have Carlos. So when the time was right, he was the first person I called.”

For Cavazo, who was between projects the offer came at a perfect time. And since he already knew the guys in Ratt from the early days, he felt comfortable with the personalities of the players. “It worked out great for me and felt very natural,” Cavazo says. “It’s funny because I was just hanging out in my house one day and I missed a call. So I checked my voice mail and noticed it was Warren. The first thing I’m thinking is, ‘Either there’s a big party he’s going to invite me to somewhere, or they’re looking for a new guitar player.’ Obviously, it was the latter.”

“It’s great to be able to do the more exotic double lead stuff that I did back in the day with Robbin,” DeMartini says. “I wanted someone I could collaborate with and someone who could sing well, so Carlos worked out on all levels.”

Ratt flew to a remote area of Virginia Beach in spring 2009 to work on new songs. They stayed in a four bedroom house there and wrote on their own schedule, banging out riff after riff and molding them into tunes quickly and with great enthusiasm.

“We wanted go off the beaten path on this one and set up somewhere we could eat, sleep and create the album in the same place,” DeMartini says. “It was great fun; we had the camaraderie of a road trip together with the environment to really stay focused.”

While DeMartini, Cavazo, Crane and drummer Bobby Blotzer finessed the music, Pearcy stayed in his room and worked on his lyrics.

“It was exciting because none of us knew how the melody and the lyrics would work with the songs until Stephen finally brought us his part,” Blotzer says. “The outcome was surprising in a good way.”

“It was great that we had those writing sessions together,” Pearcy adds. “Some of my parts were written right then and there in the studio in preproduction. That hadn’t happened since ‘83 and ‘84. One of these songs, “Garden of Eden,” was just a riff idea, but then in preproduction Warren just started playing this riff and I went, ‘What is that? I like it. Keep that. Work on that.’ And we worked it out that day.”

As Ratt worked out their ideas in preproduction, Baskette recorded their jam session on two-inch analog tape, much of the same equipment the band had used in the ‘80s. In addition, he employed numerous modern studio techniques to capture the sound the band was after. Baskette also helped Ratt hone good ideas into great songs and gave the musicians the liberty to let fly with whatever creative ideas they had.

“I was very focused on playing harder and more outside the constraints that I had on previous Ratt records,” Blotzer says. “And I was really given the key to do that from the band and from Elvis.”
“It was great for Carlos and me as well because Elvis was a guitarist in a band before he was a producer, and he’s real into tones,” DeMartini says. “He was coming from the same place guitar-wise as us, which isn’t always the case.”

The cumulative playing, recording and circumstantial synergy shines throughout Infestation. The first single “Best of Me” is a feast of foot-to-the floor dynamics that features gritty vocals that uncurl like a coiled snake into a glorious chorus, and guitar lines as memorable as a dirty limerick. “Garden of Eden” builds from a bluesy intro into a pounding gallop, and shifts into a surging stop-start sky-puncher at the midpoint. But maybe it’s a line in the mid-paced “As Good as it Gets” that most accurately sums up the approach, attitude and conviction of Infestation: “You get just what you came for.”

“Our music is like it was in the beginning; it means everything to us,” Pearcy says. “And here we are 25 years later, keeping Ratt N’ Roll alive.”

“When we play concerts now, there’s a new generation. We’re seeing kids of people who grew up with us, but the reaction is the same,” adds DeMartini. “It doesn’t seem to matter where we are in the world.”