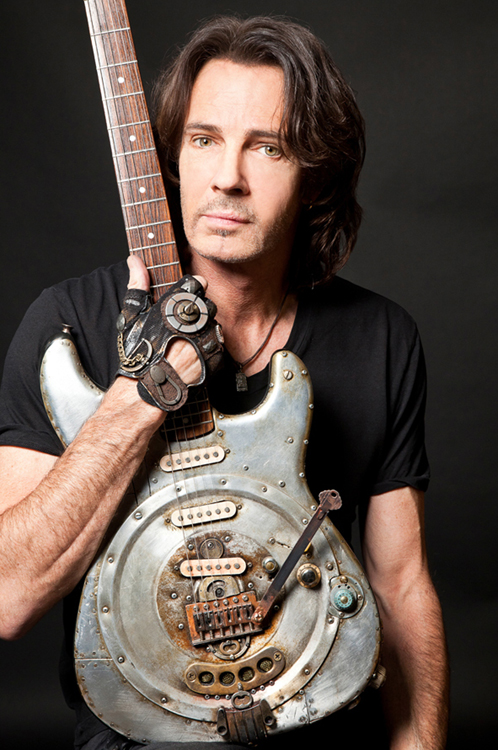 A wise man once said, listen without prejudice…So forget what you think you know, throw away your preconceptions, and prepare to hear Rick Springfield for the very first time. Pissed off. Scarred. Angry. Disillusioned. Emotionally wrecked. Battered. Forgiving. Real.

Renowned Grammy award winning singer, songwriter, musician, Rick Springfield is a quintessential pop songwriter, boasting a whopping 17 top 40 singles, including the smash hits, the chart topping “Jessie’s Girl,” “Don’t Talk To Strangers,” “Affair Of The Heart,” “Love Somebody,” “Celebrate Youth” and “Rock Of Life” One of the most criminally underrated and misunderstood artists of the past three decades, Rick Springfield has rightfully earned his stripes on the rock and roll battlefield. In an unforgiving, cold hearted business that chews up its own and moves on to the next willing victim, Rick Springfield is a bonafide rock and roll survivor.

Life isn’t easy. No matter what the rose colored world of TV and movies tries to sell you. Life is hard. Plain and simple. shock/denial/anger acceptance is Springfield’s most personal record to date, a transcendent song cycle exploring a roller coaster of raw human emotions. Taking the listener on a challenging, ambitious, disturbing yet ultimately rewarding ride, the album resounds with the sound and fury of a man with something to prove. Springfield explains the significance of the unconventional album title: “The title refers to the four stages of grief. As a writer I’m drawn to the dark side, songs about the darker side of love. I don’t write very many happy songs. The songs on the new album are very personal songs. But I always try to think universally when I write so it’s something the audience can relate to as well.”

Recorded by Grammy Award winning engineer, Matty Spindel (Santana Supernatural), the album is a remarkable tour-de force. No soulless exercise in empty nostalgia, instead, shock/denial/anger/acceptance is a brutally raw look inside the psyche of Springfield, resonating with a fiery spirit, snarling attitude and contagious passion.

“When you don’t have an audience, passion is what drives it,” Springfield asserts. “And this one is definitely back to just pleasing myself. As it was being written I had no record deal. There’s always been a darker element to my music. The songs on the album were written to clear the demons in my head. This one has a lot of energy in the music because of the shit that I was going through. When I tour the music that I write always has a lot more energy. For the first time in my life since the Working Class Dog album, it was just me ’cause I had a house up in Vegas and I was living there five days a week with none of my family around. (Springfield was starring in the hit Vegas show, EFX). It was just me writing without any other distractions. The only other time that happened was Working Class Dog.”

Raw and unflinching in its brutal honesty, shock/denial/anger/acceptance is a brave peek inside the mind of man unafraid to look inside, a man brave enough to step away from the sunshine and explore the darker side of human relationships. Stripped of any artifice, this is Rick Springfield today, without barriers, without walls, warts and all.

Lyrically, the album sports some of Springfield’s most thought provoking and accomplished lyrics to date. “All the lyrics come from a real place, a very dark place in me,” says Springfield. “For this record, I wrote lyrics for about four months before I started writing the music. The kind of freeness I felt on this album hasn’t happened since Working Class Dog.”

Brash, bold and in your face, shock/denial/anger/acceptance showcases Springfield playing all of the guitars bolstered by a band of seasoned veterans, bassist Matt Bissonette (Don Henley/ELO), keyboardist Derek Hillind (Whitesnake) and drummer Rodger Carter (Bonnie Raitt). “I wanted the record to have a real band feel. I wanted to make it sound like a band and it does,” enthuses Springfield.

Still vital, still driven, shock/denial/anger/acceptance is destined to surprise a lot of people. “I’ve always stayed hungry,” Springfield reveals. “I’m never satisfied. As far as being a writer that’s the driving force. I think much of that feeling of never being satisfied is the source of my passion and where all the energy comes from.”

One of the album’s standout cuts, “I Don’t Want Anything From You,” revs out of the gate at 100MPH, a gritty collision of snotty electric guitars and raging testosterone. “It’s very much a ‘fuck you’ song (laughs) but with a lot of pain. It comes from a very painful place in me. Writing a song like that is very healing for me. It’s hard to tell someone that to their face. I’m not a great confronter of people. I write better sitting alone in a dark corner by myself.”

Similarly, “Perfect” also addresses the fear of confrontation, drawing from outside observation. “It was inspired by a person that I know. When this person needs to confront something, instead of facing the problem, they put music on and turn it up really loud to avoid it. And that’s where the chorus line came from. It’s almost coming from a similar place as ‘I Don’t’ Want Anything From You’.”

In an affectionate nod to his Sixties musical roots, Springfield recasts “I’ll Make You Happy” by the Easybeats, as a DNA altering, amphetamine paced rocker. “When I was a kid, it was the first time I was aware of an actual guitar riff in a song,” recalls Springfield. “I remember slow dancing to it with my girlfriend at 15, even though it’s really hard to slow dance to a fast song, but I managed it (laughs) and it always stuck in my head because of that.”

Another track, “God Gave You To Everyone,” finds Springfield writing “a song about someone who feels that one person is not enough for them. It’s a sarcastic swipe at that person who feels it’s their born right that they experience whatever they want to experience at whatever cost to whomever.”

Slamming headfirst into the 21st century, Springfield has triumphantly returned to the concert stage, commanding a fiery communion between artist and his dedicated fan base. Galvanized by the profound connection he has forged with his audience, Springfield has re-embraced the joys of performing, regularly selling out shows across the country, much to the enjoyment of his first, second and third generation fans. “I was trying to figure out why I love to tour so much,” recounts Springfield. “and now I know, it’s the way I connect. That’s really what the whole album is about and why I write music, and perform live. It’s to connect with other people ’cause basically I don’t do that very well as a normal person. I’ve never been good at that. I’ve always been the guy at the party who stands against the wall with a drink in his hand. Every human being needs to truly connect and register with another person. Everybody craves that and the way I satisfy that is to play live and have people hear my emotions through the songs because I don’t explain them very well face to face.”