You are here: Home1 / Exclusive Asian2 / The Bravery 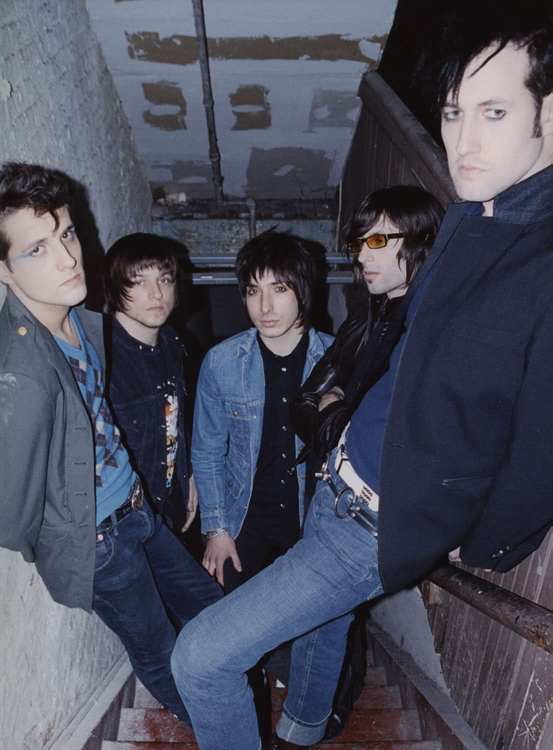 It began innocently enough. Sam played bass, John played keyboards. They met in art school, where they played any kind of music they could get there hands on–from punk to country to jazz to metal. In the early ’00s they moved to NYC, where they discovered the Electroclash scene in full swing. They loved the sound of electronic music made in the basement on piece-of-shit equipment. It sounded new and different, and they wondered if they could take that sound … and add it to a live band, creating a fusion of rock and electronic music. Sam had an iMac, John had a keyboard, and they both had guitars. They figured, what else would we need?

A band. So they looked for a singer, but couldn’t find one. So Sam thought, well, why don’t I try writing some songs, and I could sing them. Only problem was, he couldn’t sing a note. But they didn’t let that get in the way. He plugged in the guitar and wrote a song called “Tyrant,” about the girl who lived next door. It was a rock song, but John took it and remixed into a dance song. One night they played it at a house party. The girls danced. The girls demanded they play it over and over again. They realized they were on the right path.

They needed some other guys for the band, so they put an ad in the paper. Michael answered. He was a jazz-cat, a Django Reinhardt devotee; this was new music for him, and he loved it. They asked the other bands they knew about drummers. They said, well there’s a guy who’s amazing, but he just moved here from Boston last week so no one’s got him yet. This was Anthony. They grabbed him; he didn’t know any better.

They booked a show, opening for a friend’s band at tiny Stinger Club in Brooklyn. The show was in a week and they needed a bass player. So Michael enlisted his best friend, also named Michael. Only problem was, new Michael had never played a bass before. But he practiced constantly for the week, pretty much without sleeping, and played the show. They rocked.

The group hung out in John’s apartment in Chinatown, writing and recording songs. They went about it in a weird way; they made rock’n’roll the way DJs make electronic music. A DJ takes samples into the computer, chops ‘em up, edits them, manipulates the sounds, until, voila: You have a song. This is what the Bravery did, except instead of using samples, they made all the sounds themselves. Sam would write the basic song on guitar, the group would record it like a rock track, and then remix it beyond recognition. Result: something new and bold.

Lyrically, Sam writes from a strange perpective–call it that of a “hopeful misanthrope.” You get the impression he hates every person he has ever met; and sometimes he is overcome with the frustration of this. But at the last minute he refuses to give up, and you leave the song with a sense of optimism, of innocent hope. You listen to him battling his fears, his sense of negativity, and winning out in the end. As a reflection of this, they named their band The Bravery.

Eventually, they had enough songs for a whole album, so the band made a website and put the album online. They also put it on another odd site they discovered, called Myspace. (Remember, this is 2003.) They burned CDs of their music and handed them out all around town. They would stand outside of Tower Records all day handing out burned CDs. They’d play anywhere they could get a gig; the basement of Lit, TT the Bears and Middle East in Boston, etc. They would hang out all day putting up fliers, or handing out CDs outside of other shows.

Soon, the band saw that people had started coming to the shows. Then other people started playing their album. Zane Lowe at Radio One in the U.K. downloaded songs off the band’s website and started playing them on the air. Soon, Aaron Axelsen at Live 105 in San Francisco and Paul Driscoll at WFNX in Boston did the same. They booked a residency at Arlene’s Grocery in New York, every Thursday night for a month. Then a LOT of people started coming to the shows. Including record label people.

Island Records released The Bravery in 2005. For the next 18 months the band toured the world basically non-stop, enjoying much success and two international hit songs–”An Honest Mistake” and “Unconditional.” The time passed quickly.

THE SUN AND THE MOON

After touring for all this time, The Bravery were better musicians, better singers, a better band. They wanted to make an album that would reflect their growth as musicians. So they recruited producer Brendan O’Brien, well known for bringing out the best performance in a group (see: Rage Against the Machine, Neil Young etc.). The band wanted to try new textures and sounds, so they moved to Brendan’s Atlanta studio and grabbed any instrument they could get their hands on, and choked it until something good came out. That included antique pump organs (“Believe”), Mellotrons (“Time Won’t Let Me Go”), a string quartet (“The Ocean”), and a host of Pet Sounds-worthy vocal arrangements (“This is Not the End,” “Above and Below”).

Despite this newfound creativity and sense of musical exploration, the band also wanted to keep the energy that came with recording in the basement in New York. To that end, the band split its time between Atlanta and NYC. The resulting album is a hybrid of the two experiments – with a fair amount recorded in the back of tour buses as well.

This time out, they explore the same subjects of overcoming fear and negativity, but to a far greater extent, getting into territory that could be described as spiritual. Life and death, good and evil, hope and desperation–the extremes. And so came the album’s title: The Sun and the Moon.