You are here: Home1 / Exclusive Asian2 / The Used 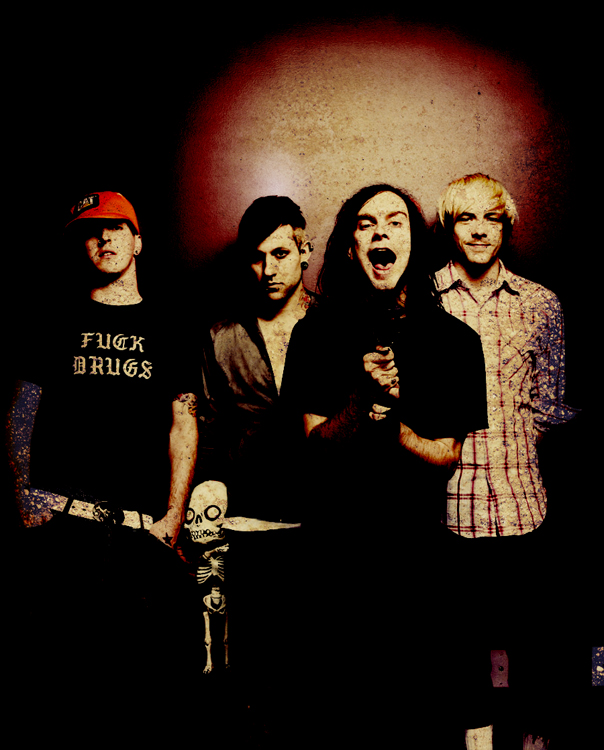 Vulnerability is commonly defined as “the inability to withstand the effects of a hostile environment.” It can be a time frame, when “defensive measures are reduced, compromised or lacking” or more personally, the soul-shaking moment when we stare in a mirror, finally seeing every last flaw. The answer is to somehow find the strength to heal, repair and improve, and for the Used, music is that salvation.

Turning personal adversity into art is the Used’s trademark, and the band’s fifth full-length, Vulnerable, was a record that simply had to be made. It marks a particular triumph for singer Bert McCracken, who is now reenergized after suffering a broken hand and elbow last year, falling from a stage in Orange County, Calif., and then spending four months getting surgery and recuperating. The experience partially birthed the title and concept of Vulnerable.

“Me feeling that vulnerability kind of sparked this creative fire inside of me,” says McCracken. “This record’s really about becoming more than just who you are, and allowing yourself that vulnerability to be a more powerful person. It’s a lot more positive than a lot of records we’ve written in the past. I think everyone could use some positivity nowadays.”

The Used—which also includes guitarist Quinn Allman, bassist Jeph Howard and drummer Dan Whitesides (who replaced original drummer Branden Steineckert in 2006)—formed in Orem, Utah in 2001, signing to Reprise Records that same year. Championed by producer and collaborator John Feldmann, the band issued their gold-certified Self-Titled debut in 2002, quickly cementing the Used as leaders among the post-hardcore elite, thanks in part to unforgettable singles like “Box Full of Sharp Objects,” “The Taste of Ink” and “Buried Myself Alive.” The band then released the CD/DVD combo Maybe Memories in 2003, now certified platinum, featuring B-sides, live cuts, demos and unreleased tracks, while still another gold record followed—2004’s In Love And Death—spawning singles “Take It Away,” “All That I’ve Got” and “I Caught Fire.”

After Steineckert’s 2006 departure, the band regrouped and issued 2007’s Lies For The Liars, hitting #5 on the Billboard Top 200, later naming Whitesides as their permanent drummer. The retooled outfit’s newfound solidarity led to 2009’s Artwork, which peaked at #10 on the Billboard Top 200, and featured Whitesides on the recordings for the first time. As if that weren’t enough to keep a band busy, since 2001 the Used has also destroyed countless stages the world over, touring with a who’s who of modern rock and heavy music contemporaries, and have been featured acts at major festivals like Warped Tour, Taste of Chaos, Ozzfest, Projekt Revolution and the UK’s Reading and Leeds festivals.

Still, after more than a decade’s worth of relentless touring and recording, the Used’s members recently needed to take some much-deserved time off. McCracken’s longtime writing partner Allman tied the knot, while Whitesides also exchanged vows and welcomed a baby into the world. McCracken spent much of his recovery in a haze of painkillers, then “awoke” to a creative limbo, in an entirely unfamiliar emotional space. At this point 2 years had passed and the band had completed numerous writing sessions that would last for 2 months at a time and in the end came out with more then 60 songs ideas. Thus when McCracken’s inspiration struck to record the songs, it came about in an entirely different fashion than the band’s previous method; with his drummer and guitarist temporarily unavailable, McCracken and Howard teamed up with Feldmann to take on the initial writing on their own while incorporating the 60 ideas they had previously worked on.

“We went in with Feldmann and wrote 11 songs and recorded them in 11 days. It was pretty magical,” says McCracken. “It was a bit more of the record I wanted to make. I think Quinn and Dan were stoked about that. I could go in one day and be like, ‘I really like the vibe of ‘Bombs Over Baghdad,’ so let’s start with a bass line and a drum beat like that.’ It was the most amazing time; the most fun I’ve had making a record.”

McCracken and Co. emerged from Feldmann’s studio toting the 12 tracks that comprise Vulnerable, the band’s first full-length since departing Warner Bros. Records. Without a label for the first time since their debut, the band opted to go indie, forming their Anger Music Group imprint, which will be distributed through Hopeless Records. The release of Vulnerable marks a new chapter in the band’s enduring career, at a time when the Used’s music is organically evolving, as well.

“I think [Vulnerable] is really new for us. There’s a lot of hip-hop influence, beats and drum and bass kind of stuff, but it’s also still a Used record, by all means,” explains McCracken. “Just like any other Used record, it’s a horse of many colors: There are a lot of soft and heavy sounds, there are a lot of brutal, sharp, bright sounds, and the tempos are anywhere from ultra-slow to super fast and heavy. There are a lot of different conceptual feelings on the record.”

Opening track and leadoff single “I Come Alive” sets the tone for the record from the start, with the sort of “down, but not out” sentiment McCracken has always channeled into his lyrics. “The song, for me, is about falling down or hitting the ground; when things happen to you in life,” says McCracken. “That’s pretty much what ‘Box Full of Sharp Objects’ was about as well, on the first record. Taking a hit can be the most inspirational thing that can happen to you.”

The drive to overcome all obstacles, whether physical or emotional, also informs “Put Me Out,” which McCracken says centers on “the turmoil from a relationship you could have with anyone in your life; how people just kind of feel cheated and fucked over sometimes. Falling down and rising above that can make you a more powerful and stronger person.” Album closer “Together Burning Bright” ends the journey on a romantic, yet appropriately darkly tinged note. McCracken says the song was heavily inspired by the Chuck Palahniuk book Damned, as well as the film Melancholia.

“Maybe the end of everything, so long as you can be with the person you love, everything will be alright, no matter what,” McCracken says. “It’s kind of a sappy, end of the world song.” That may be true, but for now the Used’s world is far from ending. With Vulnerable slated for a March 26th, 2012 release, a world tour behind the record will follow, including appearances at Warped Tour, Soundwave in Australia, dates in Asia and Europe, and full headlining runs through the U.S., not to mention a DVD in the works to commemorate their decade-plus anniversary. The Used may have spent recent years nursing wounds and taking honeymoons, but 2012 and beyond will be all about bringing Vulnerability, and its uplifting message, to the masses.

“This record is for all those people who weren’t the coolest people around. We never were. This record’s for kids like us, who just love music, because it saves their lives every day,” McCracken says. “At the end of the day, I’m the only one who has to live and die with myself. I want to make it a good one for me. I only have one life to live.”

The Bravery
Scroll to top