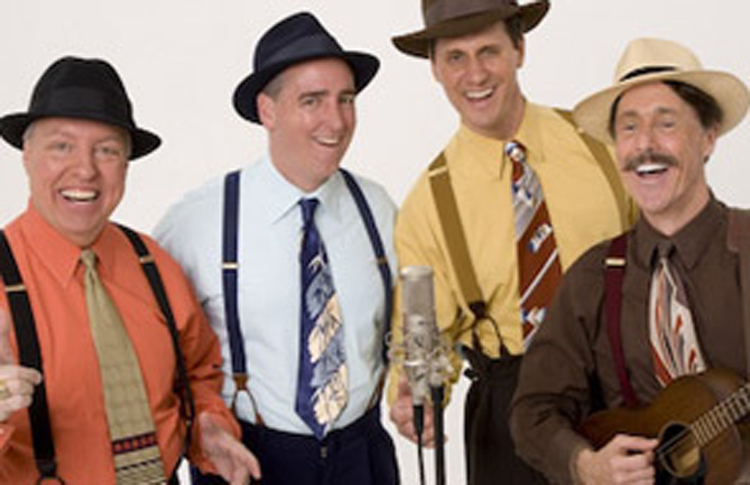 About The Perfect Gentlemen

The Perfect Gentlemen formed in October of 1998. Since their formation the quartet has appeared throughout the USA and Europe, with numerous appearances on radio, stage and on television.

Phil Gold began performing professionally in 1987 when he moved to Los Angeles. Since then, he has performed in 41 States, Canada, Brazil, Japan, Russia, the Georgian Republic, at The White House, on board cruise ships in the Caribbean and the Mediterranean, and on an aircraft carrier in the Pacific. Having sung all through school, Phil graduated from U.S.I.U. in San Diego as a musical theatre major. He spent five-plus seasons performing in 22 productions with the Los Angeles Opera. Phil has sung with the Los Angeles Master Chorale and had the privilege to be one of the Ray Conniff Singers on Ray’s very last tour.

A veteran of musical theatre, Phil toured the country for 13 months in the jazz quartet, the Angel City 4. Other theatrical appearances include shows without quartets: Oklahoma, The Mikado, Fiddler On the Roof, Baby, and Assassins. And some with: The Music Man, My Fair Lady, Forever Plaid, and it’s holiday sequel, the brand new Plaid Tidings. Equally comfortable behind the scenes, Phil toured Germany and Austria stage managing the musical Sisterella.

Phil also co-produced World Acappellafest, the largest acappella concert ever held in Los Angeles. He has appeared on Brooklyn Bridge (CBS), Ned & Stacey (UPN), The Tonight Show with Jay Leno (NBC), Passions (NBC), and Gilmore Girls (WB). Phil can be heard as the voice of Wendel in the direct-to-video Friends Are Forever in Australia. He was on the studio cast album of the Gershwin musical Tell Me More (Nonesuch), The Alley Cats’ release of Strike 3! (Primarily Acappella) and Holiday in Plaid (Fynsworth Alley).

As a music producer and performer, his work has taken him on tours throughout the United States, Great Britain, Canada, Russia, Germany, Mexico and the West Indies, logging over 800 shows since first singing Acappella some 30 years ago. He has two district quartet championships to his name, the International Barbershop Quartet Championship, singing lead with The New Tradition.  Multiple medals singing with The Grand Tradition and The 139th Street Quartet and the National A Cappella Championship with The Perfect Gentlemen. As well as a 6 year stint on “Main Street USA” as baritone of The Dapper Dans of Disneyland. Dan has been project coordinator for various artists including: The Hi-Lo’s!, Neil Diamond, The New Tradition, and Revolution.

Multiple ASCAP Artist Awards and 5 GRAMMY Considered CDs, as well as cofounder and producer of the World AcappellaFest. He was a cofounder of the Association of Far Western District Champions (AFWDC). Dan was also a certified stage presence judge (SPEBSQSA), ICCA Judge, Harmony Sweepstakes Judge and past Los Angeles Regional producer. Dan owns his own music production company and his wife Barbara.

Tim Reeder Baritone and Tenor Vocalist, Martin Tenor Guitar and Ukulele. He has been writing songs and singing his whole life. His introduction to singing barbershop started in High School, where his music teacher, Ron Browne (“Dapper Dans” and “Yerfadder’s Mustache” fame), taught him the harmony ropes. Tim first performed on national television in 1976 with his Barbershop Quartet, “The Hotshots.” In 1978 his college quartet was hired to sing weekends at Disneyland. An accomplished musician, Tim’s prowess on tenor guitar, his ability to sing alto and scat, plus his love for swing music, lead him to form his own 1930′s-era vocal jazz group called “Vocalworks.” This “hip” group, prominently featured Tim’s scat-singing and ukulele playing.

In addition, they were featured on Garrison Keillor’s national radio show, “A Prairie Home Companion.” Tim’s wife Debbie sings soprano with the group. Alongside with former Dapper Dan alumni Bruce Cooper, and on stand up bass, “Magic” Dave Eastly. Vocalworks has appeared in various countries. He has appeared on television, in commercials, and the legitimate stage too. You’ve probably seen and herd him on “Home Improvement,” “Gilmore Girls,” “That 70s Show,” Disney’s “Haunted Mansion” starring Eddie Murphy, and Holiday commercials for “Amazon.com” to name a few. Tim is a member of the Frank Thorne Chapter of SPEBSQSA and is a native of Mississippi.

Jim Campbell has been singing professionally since 1991 when he moved to Los Angeles from Louisville, KY. He grew up around his mother Carole’s Sweet Adelines activities and sang along with her recordings of male quartets. Quartets like the Suntones and Bluegrass Student Union. Hooked on barbershop singing, he soon joined the Louisville Thoroughbreds. Jim cut his barbershop teeth under the direction of Jim Miller and Allen Hatton. At Bellarmine College he studied voice for 4 years and was heavily involved in their choral music program.

He also appeared in professional regional musical theatre productions and was a chorus member with Kentucky Opera. Majoring in Communications, he was a sergeant in the US Army Reserves for 6 years. Heading west, he studied opera at the Vocal Institute at UC Santa Barbara with Elizabeth Mannion.

In 1992 he began singing bass with the Dapper Dans of Disneyland. Jim has also been bass soloist and section leader for Canterbury Choir at All Saints Church in Pasadena since 1991, recording R. Vaughan Williams Dona Nobis Pacem. In addition to singing and touring with The Perfect Gentlemen while winning the 2002 National A Cappella Championship. A featured soloist with the Pacific Symphony Pops and Santa Barbara Symphony. Jim has also sung with Pacific Chorale, Angeles Chorale and The LA Choral Artists.

Musical theater credits include Kenickie in Grease, Action in West Side Story, Curly in Oklahoma!, and a soloist in Leonard Bernstein’s Mass. On television Jim has sung on The Simpsons (Homer’s Barbershop Quartet), Home Improvement, The Tonight Show with Jay Leno, That 70s Show, Gilmore Girls, Blossom and various Walt Disney specials. Film-wise he has sung on Disney’s The Haunted Mansion. Jim makes his home in Glendora, CA with his lovely wife Danae and their son Will.