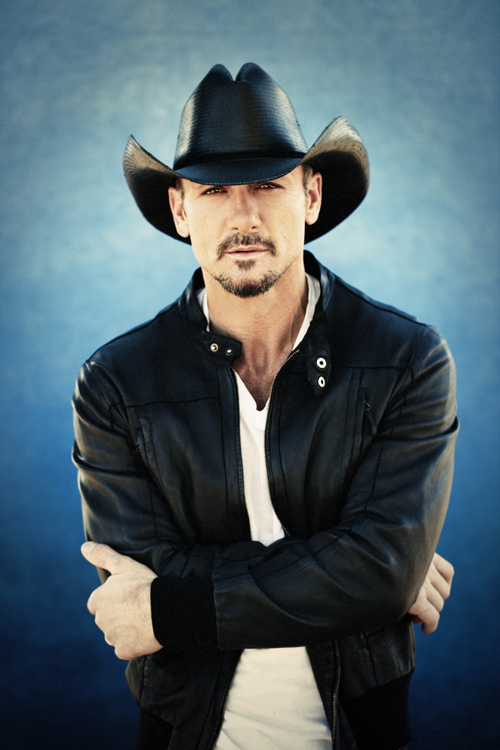 This dedication to honesty and integrity has helped make McGraw not just a country music superstar, but one of the biggest names in all of music today. In his record-shattering career, McGraw has sold over 40 million albums, and dominated the charts with 30 Number One singles. Since the release of his debut album in 1993, he has won three Grammys, 14 Academy of Country Music Awards, 11 Country Music Association Awards, and 10 American Music Awards, while simultaneously maintaining a parallel career as a successful actor.

Now, with the release of SOUTHERN VOICE—his tenth studio album, and his first in over two years—Tim McGraw is extending his achievements even further. Recorded with his longtime producer, Byron Gallimore (Faith Hill, Sugarland), the disc’s twelve songs represent a new level of depth and intensity for the singer from the small town of Start, Louisiana; they tell unforgettable stories of lives lived and lessons learned, and reveal a man staring down what it means to be a father, a husband, a Southerner.

McGraw says, though, that the album’s strong sense of maturity wasn’t entirely intentional. “I don’t go out looking for that kind of material,” he says. “As an artist, you just put your antennae up, and you find and record whatever you’re drawn to. Of course, everything in your life factors into what you choose. So you might not notice any theme as you’re making an album, but once it’s done, then you look back and get a better picture of where you were as a person at the time.”

Among the territory explored by McGraw on SOUTHERN VOICE is aging and mortality (on songs like “If I Died Today” and “Forever Seventeen”) and the relationships between parents and children (“You Had to Be There,” “I Love You Goodbye”). These concepts aren’t new for the man behind “Live Like You Were Dying,” but they continue to add weight and perspective over time.

“Those things are part of my life, and they get a little more in-depth the older I get,” he says. “Both of my fathers are dead now. Some things hit a little harder than if they were still around—but it can also make you a little softer in some ways, too.”

Of course, not all of SOUTHERN VOICE is such serious business. The album’s first single, “It’s a Business Doing Pleasure With You,” is a cranked-up lament about the financial tolls of romance. The title track, meanwhile, is nothing less than a modern anthem, an irresistible celebration of the joys and contributions of the American South.

“It reminded me of songs from earlier in my career,” McGraw says. “Something like ‘Down on the Farm’—it has those kind of sentiments, but said in a more mature, more lived-in way. It says a lot without you realizing it’s saying it to you.” No question, “Southern Voice” has to be the first song to shout out Hank Williams and Rosa Parks, Michael Jordan and William Faulkner. (“It’s a different time,” says McGraw, “and people embrace all of those things now.”)

“Southern Voice” has a strong Southern rock feel—there’s a reason the Allman Brothers and Tom Petty are included in the song’s list of heroes—and on the more reflective “If I Died Today” that flavor turns up again. “Growing up in Louisiana, of course I listened to country music,” says the singer, “but that ‘70s rock is a big influence on me, too. On that song, I went in with the intent of making a Traveling Wilburys/Mark Knopfler/Eagles kind of thing—I knew exactly what I wanted it to sound like.”

Another song on SOUTHERN VOICE that’s sure to draw attention, however, took a more unexpected turn in the studio. “‘I’m Only Jesus’ is the one that surprised me the most,” says McGraw. “I loved the song, but I wasn’t quite sure what it was going to come out like. My guitarist came up with a part that really turned the song around, and the end result was way more smoking, more rocking than I ever expected. The song always had this strong message, but now it really hits you upside the head.”

One of the world’s most beloved live performers (on their historic 2006-2007 Soul2Soul tour, he and his wife, Faith Hill, performed for over two million fans), McGraw will support SOUTHERN VOICE with an extensive tour in 2010. First, though, he needs to fulfill some commitments for his career on the big screen, including a co-starring role in The Blind Side, with Sandra Bullock, opening later this year.

Since his widely-acclaimed performance in 2004’s Friday Night Lights, McGraw has also appeared in Flicka (2006), The Kingdom (2007), and Four Christmases (2008)—as well as hosting Saturday Night Live, a rare honor for a singer in any genre. “Acting is an extension of what I do,” he says. “It adds emotional depth, and gives another dimension to how I prepare to make a record or a video. You take on things and learn, take in information, and different tangents show up that can’t help but reflect in what you do as an artist.”

All of Tim McGraw’s experiences—as a singer, an actor, a husband and father—culminate in his work on SOUTHERN VOICE. These songs offer the perspective of a man who has lived a full life and always stayed just a bit under the radar while steadily racking up multi-platinum honors (“I like going out and quietly slaying dragons,” he says.) He has recorded some of the hits that define country music over the last fifteen years—classics like “Just To See You Smile,” “I Like It, I Love It,” and “It’s Your Love” (which was voted CMT’s top video of all time)—but he still seems to operate entirely on his own terms.

“I don’t look at how I fit into the industry, into the puzzle of other artists,” says McGraw. “I look at how can I get better and where I’m going. I’m competitive and I want to win, but at the same time, I don’t even know what the competition is doing. I just want to get better, period.

“I’m only maybe 30 percent of where I want to get to,” he concludes. “And I see a lot more ahead of me than there is behind me.”