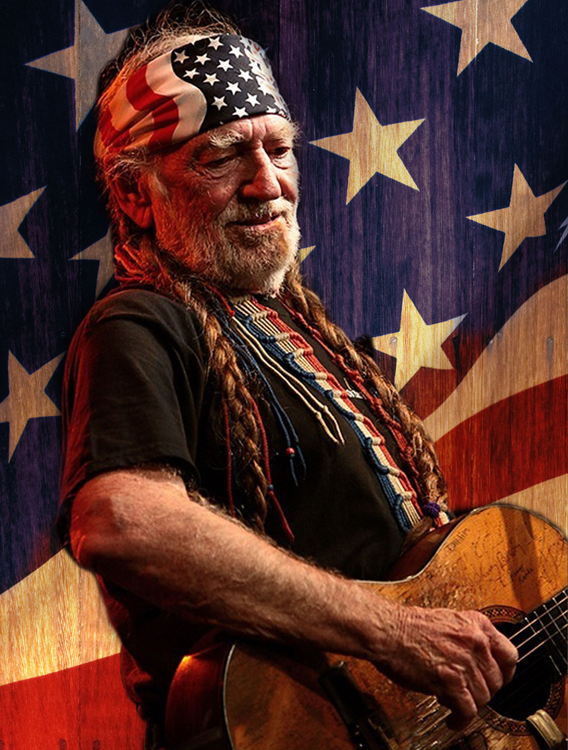 If ever the words “living legend” were more than just public relations bluster, the application would be to Willie Hugh Nelson.

The iconic Texan is the creative genius behind historic recordings like “Crazy,” “Hello Walls,” Red Headed Stranger, and Stardust. His career has spanned six decades. His catalog boasts more than 200 albums. He’s earned every conceivable award and honor that can be bestowed to a person in his profession. And he has also amassed reputable credentials as an author, actor and activist.

In many ways, however, the weighty distinction “living legend” does Willie a disservice, for it discounts the extent to which he is a thriving, relevant and progressive musical force in the year 2004. He has two new albums coming out, recently embarked on an imaginative tour with another musical icon, again headlined Farm Aid, has established himself as a top television ratings draw, and has a recent No. 1 single and Super Bowl performance under his belt.

The prolific Nelson follows that album with the October release of It Always Will Be, his first full studio album since 2002′s The Great Divide. The disc features duets with Paula Nelson, Norah Jones and Lucinda Williams, as well as a cover of Toby Keith’s “Tired” that Rolling Stone calls “heartbreaking.” Willie again proves his propensity for taking chances and, as always, meeting those challenges in a manner that appears deceptively effortless.

Earlier this year, Willie embarked on a warmly received tour of minor league baseball parks with Dylan. He recently played Farm Aid in Seattle, and event he continues to support after co-founding it in 1985. Last year found him enjoying yet another No. 1 single, this time a duet with Keith titled “Beer For My Horses,” and another USA Network special became the highest-rated live musical event in the history of cable television.

As ever, he tours tirelessly, climbing aboard Honeysuckle Rose III (he rode his first two buses into the ground) and takes his music and his fans on a seemingly endless journey to places that were well worth the ride.

Born April 30, 1933 in Abbott, Texas, Willie Nelson and his sister were raised by their paternal grandparents who encouraged both children to play music. He began writing songs in elementary school, and played in bands as a teenager. After high school he served a short stint in the Air Force, but music was a constant pull.

By the mid Fifties he was working as a country deejay in Ft. Worth, while continuing to pursue a musical career, recording independently and playing nightclubs. He sold some of his original compositions, including “Family Bible,” which became a hit for Claude Gray in 1960.

That success and others convinced Willie to move to Nashville, where record labels were initially resistant. His songwriting talents were quickly embraced, however, and 1961 proved to be his breakthrough year. His “Hello Walls” became a nine-week No. 1 for Faron Young, and Patsy Cline’s version of “Crazy” became an instant classic.

In 1962, Nelson scored his first two top 10 hits as a recording artist for Liberty, but struggled for a breakthrough for the remainder of the decade. Disillusioned with Nashville and with his label RCA’s insistence on lush, string-laden arrangements, he moved back to Texas in 1972. Emboldened by the rock and folk music becoming popular in Austin, Willie and his music began to change.

His first Atlantic album, 1973′s Shotgun Willie got the attention of music critics if not the masses, and the 1974 follow-up Phases & Stages helped him build a loyal following. The breakthrough he’d been seeking for the better part of two decades came in 1975 when he parted ways with Atlantic and signed with Columbia.

Red Headed Stranger became one of country’s most unlikely hits. The acoustic concept album vaulted Nelson to country music’s top ranks, much to the surprise of Music Row. Willie’s convention-busting stardom, combined with the concurrent popularity of maverick Waylon Jennings, prompted journalist Hazel Smith to dub the trend “Outlaw Music” and a movement was underway.

A fixture on the singles charts over the next several years, Willie’s star rose even further with the 1978 releases Waylon & Willie and Stardust. The former included “Mamas Don’t Let Your Babies Grow Up To Be Cowboys.” The latter, a collection of pop standards, further exhibited Nelson’s ability to defy expectations on the way to tremendous success.

Nelson’s stardom soon translated to another medium with roles in feature films including The Electric Horseman, Honeysuckle Rose, Stagecoach and many more. And the hits kept coming. “On The Road Again” reached the top of the charts in 1981, “Always On My Mind” was a crossover smash in 1982, and a duet with Latin pop star Julio Iglesias, “To All The Girls I’ve Loved Before,” raced up the charts in 1984.

Willie enlisted Kris Kristofferson and Johnny Cash for the Highwaymen album, released in 1985. That same year he founded Farm Aid, an organization dedicated to championing the cause of family farmers. Farm Aid’s annual televised concert special raises funds and, along with the Willie’s annual Fourth of July picnic, has become a cornerstone of his live touring schedule.

The Nineties brought more success, and one notable challenge. A $16.7 million dollar bill from the IRS forced Nelson to sell many of his assets, including homes, and resulted in the release of The IRS Tapes: Who’ll Buy My Memories. Willie cleared the debt by 1993, and was inducted into the Country Music Hall of Fame that same year.

But enshrinement didn’t slow his creative energy, and the decade produced artistic triumphs including Across The Borderline. The album featured Bob Dylan, Sinead O’Connor and Paul Simon among its many guests.

Signing with Island/Def Jam in 1996, Willie embarked on another fertile period, releasing Spirit, the acclaimed Teatro and an instrumental-focused album called Night and Day as the millennium drew to a close.

His association with Universal continues now at Lost Highway, with 2003 proving to be another landmark. In addition to turning 70, Willie released Run That By Me One More Time, a collaboration with Ray Price featuring new recordings from their combined 50 years of catalog.

All told, Nelson’s 2003 endeavors earned him four Grammy nominations to go with a career that has been recognized with eight Grammy wins, a President’s Merit Award, a Grammy Legend Award and the prestigious Lifetime Achievement Award. In 2004, the Academy of Country Music recognized him with the Video of the Year Award for “Beer For My Horses,” and the prestigious Gene Weed Special Achievement Award, honoring Nelson’s “unprecedented and genre-defying contributions to popular music over his nearly 50-year career.”