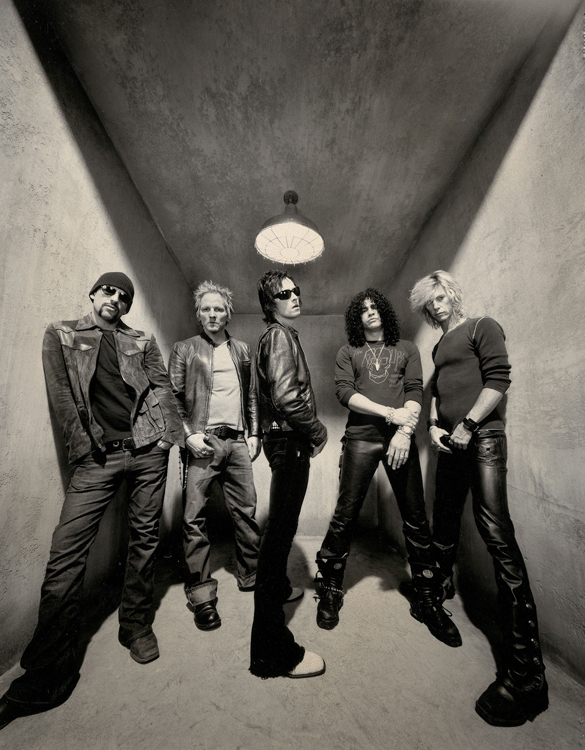 Velvet Revolver was formed when three former members of Guns N’ Roses, Slash (guitar), Duff McKagan (bass), and Matt Sorum (drums) joined to play a benefit concert for fellow musician Randy Castillo in 2002. They subsequently decided to form a new band that would bring the spirit of rock back to the mainstream. Izzy Stradlin was initially invited to be the band’s rhythm guitarist, but both Stradlin and the band decided against this because of his aversion to lead singers and life on the road. The band recruited guitarist Dave Kushner, who had previously played with Wasted Youth, Suicidal Tendencies, The Infectious Grooves, and Dave Navarro. Kushner had attended school with Slash and had worked with McKagan in Loaded, the band in which he played before joining Velvet Revolver. The quartet were referred to under the temporary name “The Project” while the band was auditioning singers.

The quartet then set about recruiting a lead singer, with VH1 filming the recruitment process. The resulting documentary was aired as VH1 Inside Out: The Rise of Velvet Revolver. A number of lead singers auditioned, including Canadian Todd Kerns (formerly of Age of Electric), Josh Todd (of Buckcherry), Michael Matijevic (of Steelheart), Sebastian Bach (formerly of Skid Row), Kelly Shaefer (of Atheist/Neurotica), Myles Kennedy (of Alter Bridge), who declined any invitation, and Travis Meeks (of Days of the New), all of whom were unsuccessful. Reportedly, ex-Faith No More singer Mike Patton was also approached early in the process, but he declined the offer to front the band. Scott Weiland had become friends with McKagan and had once played on the same bill as Kushner. Weiland heard the material and offered his services as the lead singer and the band clicked.

Velvet Revolver recorded its first track “Set Me Free” for the soundtrack for the movie Hulk in 2003. The band also recorded a cover of Pink Floyd’s “Money” which is featured in the movie The Italian Job. The band played its first live gig at the El Rey in Los Angeles in June 2003. It recorded its first album, Contraband, in the latter part of 2003 with recording complicated by Weiland’s court appearances for drug charges and his subsequent sentencing to undertake rehabilitation.

The marketing campaign for Velvet Revolver in the run-up to the release of the first album was profiled as part of the Frontline (PBS) program The Way the Music Died, which included interviews with the band members and producers.

Since then, the band has released five more singles: the ballads “Fall to Pieces” and “The Last Fight”, and the hard-rockers “She Builds Quick Machines”, “Dirty Little Thing”, and “Come On, Come In”, all of which have videos featured for them. “Fall to Pieces” has been remarkably successful not only on rock stations but also on modern music stations. The band consequently declined an invitation to tour with KISS after learning that Poison would be a part of the bill, afraid they would be dismissed as another 1980s bands re-grouping for the sake of monetary gain. Instead, they state they wish to be seen as a new band.

As of August 2005, Contraband had sold more than 2 million copies in the United States, and the rigorous touring in support of the album reached global scales. The band toured both the United States and Europe twice, while also performing in Australia, New Zealand and Japan.

The band also recorded a new song entitled “Come On, Come In” for the 2005 movie Fantastic Four.