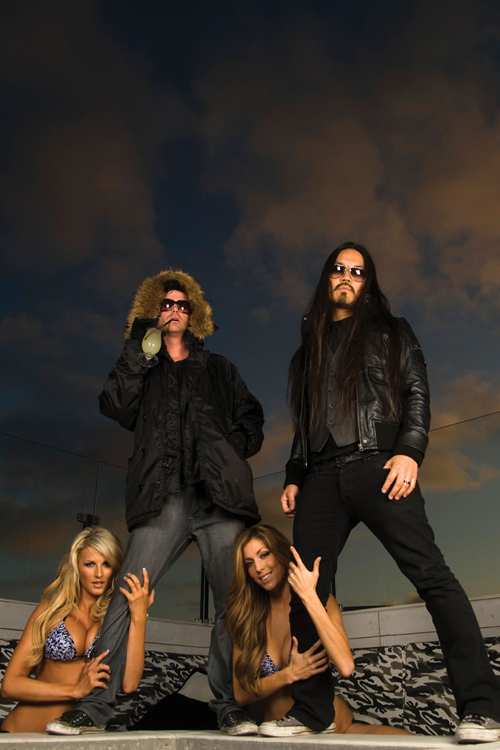 For the past decade, Southern California’s Unwritten Law has consistently triumphed over adversity. After the release of 5 records on 5 different major labels, Unwritten Law continued to thrive to the bewilderment of label reps and industry insiders thanks to the support of their die-hard fan base. Now the group is giving back to the fans that have weathered the storms of the music business along with them with the release of their first ever live album and DVD “Live And Lawless”, in stores this summer.

The 2-disc CD/DVD captures the power pop punk rockers in their element; live, raw and in the faces of fans. The live performance was captured at Hollywood’s legendary Key Club where they played a list of fan favorites like “Up All Night”, “She Says”, “Rest of My Life” and the #1 Top 20 single “Seein Red” in front of a sold-out crowd. The DVD was Produced by Devin DeHaven (Busta Ryhmes, Method Man, Papa Roach), and includes 13 live tracks as well as behind the scenes footage, band interviews and a special interview where fans submitted questions through the Unwritten Law website to have them answered directly by the band.

“We really pride ourselves on being a live band,” says bassist Pat Kim. “People listen to the album, but when they come see us live it’s a totally different ball game. This allows fans to see what we do live with a full production, killer sound and the crowd going insane.”

Established in the mid-1990s, Unwritten Law has been crafting some of the most infectious pop-punk of the last decade. After releasing a series of independent records that saw them relentlessly tour the country with everyone from Authority Zero to punk legends the Sex Pistols, Unwritten Law garnered the mainstream attention they so richly deserved with the release of their fourth album “Elva”. The album produced the singles “Up All Night”, “Rest of My Life” and the #1 Top 20 single “Seein Red”, eventually selling in excess of 400,000 copies. In 2003 the group stripped down for an acoustic live record “Music in High Places”, while the group’s 2005 release “Here’s to The Morning” debuted on the Billboard Charts Top 200 at #51.

No longer forced to work within the constraints of the major labels, Unwritten Law is enjoying their new found freedom as they get ready to release “Live And Lawless” the first release on independent powerhouse Suburban Noize Records. This summer they will enter the studio to write material for their untitled sixth studio album to be released in early 2009.

“Being on an independent label again has lifted a lot of weight off of our shoulders. We’ve spent our time on 4 different major labels and when he had our first Top Single there was all this pressure to repeat it,” says Kim. “On our last studio release the label brought outside songwriters like Linda Perry to help write songs. Now with Suburban Noize the vibe is less stressful and they are just letting us do what we do best, which is write good songs.”