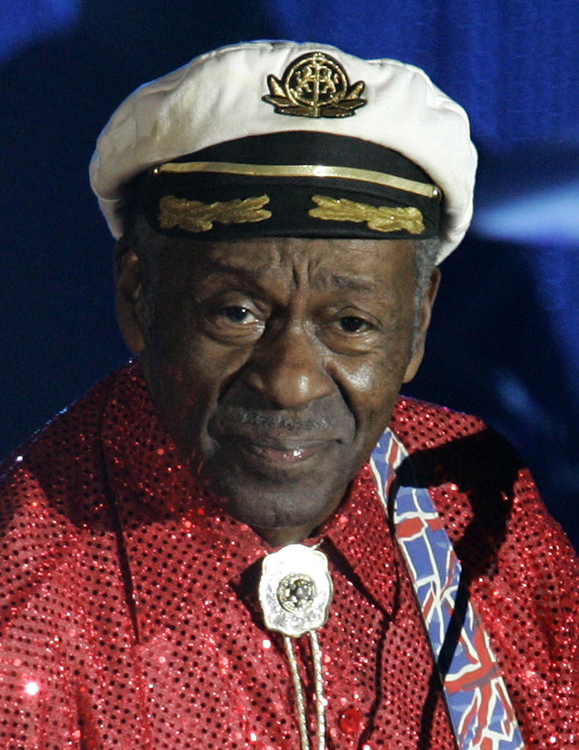 Chuck Berry’s music has transcended generations. Tunes like Johnny B. Goode, Maybellene, and Memphis are some of the most easily recognizable rock and roll songs of the century, and have become anthems to American youth and popular culture. The artist behind these hits, Chuck Berry, is a musical icon who essentially established rock and roll as a musical form instead of a hybrid of R&B and country.

Berry’s incredible success is due to his ability to articulate the concerns and attitudes of his audience in his music. At the height of his success, Berry was a thirty-year old black man singing to a mostly white, teenage audience. Dubbed the “Eternal Teenager,” Chuck Berry’s knowledge of the pop market and what it wanted to hear, made it possible for him to break color barriers and play to an integrated audience.

Born in St. Louis on October 18, 1926, Berry had many influences on his life that shaped his musical style. He emulated the smooth vocal clarity of his idol, Nat King Cole while playing blues songs from bands like Muddy Waters.

It was in 1953 that Chuck Berry joined the Sir John’s Trio which eventually was renamed the Chuck Berry Combo as Berry’s humorous singing, playing, and stage act began stealing the show. After becoming a hometown success at the popular Cosmopolitan Club, Berry headed to Chicago to try and get a recording contract. In May of 1955, Berry auditioned for Leonard Chess of Chess Records, a blues label. Much to Berry’s surprise, it was a hillbilly number, not a blues number that caught Chess’ attention. Berry was signed to Chess Records and in the summer of 1955, Maybellene reached #5 on the Pop Charts and #1 on the R&B Charts. Through Chuck Berry, Chess Records moved from the R&B genre into the mainstream and Chuck Berry was on his way to stardom.

Berry continued his success with such hits as Brown-Eyed Man, Too Much Monkey Business, Memphis, Roll Over, Beethoven! and Johnny B. Goode. Johnny B. Goode is Berry’s masterpiece, as it brought together all the elements of Berry’s unique musical sound. It cemented his place in rock history and led to fame in the fifties. His popularity garnered him television and movie appearances and he toured frequently.

In the 60s and 70s, Berry’s music was the inspiration for such groups as the Beatles and the Rolling Stones. Berry had a number of comeback recordings and in 1972 had the first and only #1 Pop Chart hit of his career with My Ding-A-Ling. 1986 fittingly saw him inducted into the Rock Hall of Fame. As a tribute to the pervasiveness of Chuck Berry in the realm of rock and Roll, a clip of Johnny B. Goode was chosen as a representation of rock music in the Voyager I spacecraft proving Chuck Berry and his rock legacy are truly out of this world.