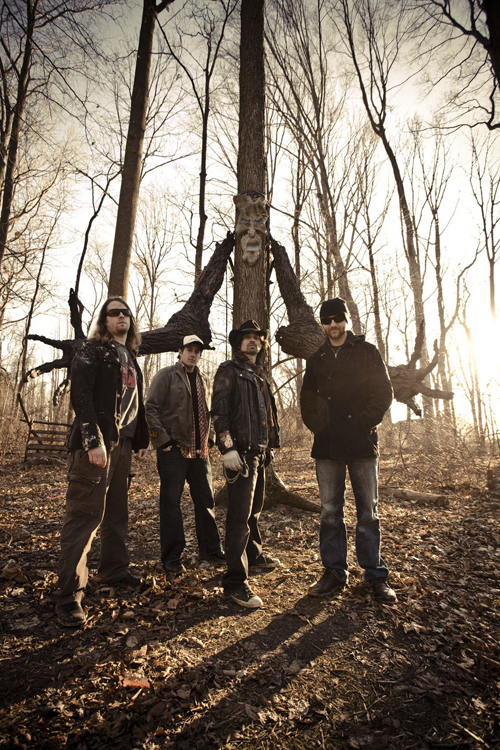 The roots of the relationships that bring you the present-day CKY date back to late 1992 at East High School in West Chester, PA. 14-year-old drummer Jess Margera is a freshmen in Pre-Algebra 1A class, where he meets 16-year-old guitarist/vocalist Deron Miller, a junior who had past credits to make up. They became friends, but it wasn’t until later that they started playing music together. By 1995, they were writing songs and practicing together exclusively in Jess’ basement under the band name Foreign Objects. They entered the studio that summer, and, on October 1, they released a five-song EP, The Undiscovered Numbers & Colors, which was a popular local release. They played two official shows as Foreign Objects with the first of many live bassist’s over the next few years.

In the spring of 1996, the two decided to take a different musical route, stripping away their metal sound and recording a more simple, radio-friendly form of music under the name Oil. The writing and recording of music under the name Foreign Objects never ceased, however they would only release music as Oil for the next three years. They performed several shows in Summer 1996 with their second live bassist, Andy Smith,and released a four-track EP cassette titled Lifeline (the name of the studio it was recorded in), which was limited to 150 copies. Later in the year, Deron and Jess took on their third live bassist, Ryan Bruni, whom they met while working at UPS.

The two began recording new material in January 1997, which would be released months later as their self-titled second EP cassette (referred to as the Gold Tape), limited to 500 copies. Oil continued on through November 1997, when they started recording their first official album (which would later become CKY’s Volume 1). It was during these recording sessions where they met engineer/producer Chad Ginsburg. Chad was attracted to Oil’s song “Disengage the Simulator”, and was asked to join the band as a second guitarist. This addition is the true beginning of CKY.

By 1998, with a concrete writing core of Chad Ginsburg, Jess Margera, and Deron Miller, and their live bassist Ryan Bruni, Oil dissolved. Sitting around a pizza place in West Chester, Deron came up with Camp Kill Yourself as the new band name, the new direction, the new movement. No more mainstream and no more pop appeal. Camp Kill Yourself finished writing and recording their first album as a group. The album, titled Volume 1, was released on February 27, 1999. The same day, they released an unofficial compilation album titled Volume 2; the CD contained demos, b-sides, and prank phone calls, serving as a soundtrack album for Jess’ brother’s first skate video.

The group joined the 1999 Vans Warped Tour, and played various shows on their own. However, near the end of the tour, the band was kicked off for joining a fan protest of tour vending prices. Later that year, Camp Kill Yourself was signed to Volcom Records, and Volume 1 was re-released that December with minor artwork changes.

In February 2000, the band fired live bassist Ryan Bruni, disappointed by his abilities and performance on the ’99 Warped Tour. For the next four months, Chad would play live bass until they found a replacement. After the re-release of Volume 1 the previous December, Volcom requested they change their name and their album cover (a drawing of politician Bud Dwyer committing suicide on live television). The label changed the artwork to the permanent photo of Chad doing a guitar flip during a live show, the band name to Camp, and the album name to CKY. The album was re-released in April with the changes, but the band was not happy with Camp for a band name, and decided to reverse the titles. CKY was now their permanent band name.

That June, preparing to play the 2000 Warped Tour, Chad recruited their fourth live bassist, Vernon Zaborowski, who would be their most concrete bass player to date. During the tour, the band put out their first EP, Disengage the Simulator, which was limited to 2,000 copies. Starting that October, CKY’s music appeared on the hit MTV show “Jackass”, generating a flood of new fans. The show also featured band members themselves on certain episodes.

The first half of 2001 was filled with many live shows on various tours, a second printing of Volume 2 that April, and, more importantly, a change in record labels. Volcom Entertainment was a small, unorganized franchise with poor distribution, and CKY eventually outgrew them, ready for worldwide distribution of their music. That May, the band signed with Island Records, and Volume 1 was re-mastered and enhanced with music videos for a final printing of the album. With a new label, a new official web site, and a more organized structure, CKY decided to write and record a second album. Recording started in November, and the album was finished early January 2002.

The first half of 2002 was relatively quiet, waiting for Island Records to assign a release date to the new album. Meanwhile, Volume 1 was finally given worldwide distribution in June through Island. September 24, 2002, their long-awaited second album, Infiltrate Destroy Rebuild, was finally released. A supporting tour began weeks before the album came out, and it continued into December, when the band was asked to open for Guns ‘n’ Roses on their “Chinese Democracy Tour”. However, the tour’s first show in Vancouver, British Columbia was cancelled 20 minutes before the doors opened, inciting massive rioting at the arena. The surreal event occurred while the band was setting up on stage, and it garnered international news media attention. The band stayed on the tour until it was eventually cancelled early December before the show in Philadelphia, PA, CKY’s home-town.

Fresh off the “Infiltrate Destroy Rebuild” and “Chinese Democracy” tours, the band jumped right into the first dates of 2003, the “Out On the Noose Again Tour”. In late March, after a show at the House of Blues in Chicago, IL, Chad tripped while walking down a flight of stairs and broke his tailbone, postponing the tour until May. Guns ‘n’ Roses wouldn’t be the only legendary band to show interest in CKY- heavy metal legend Metallica contacted the band shortly after the failed Guns ‘n’ Roses tour. James Hetfield personally phoned Deron to request them to open for Metallica at the Fillmore in May of 2003- the first time Metallica had performed since losing Jason Newsted in 2000. This was a major step for the band and a dream come true, especially for Deron Miller, who considers Metallica iconic and Hetfield an inspiration.

While they were on the road, CKY’s first ever vinyl release, a 7″ two-song compilation titled Hellview, was published by Island Records on March 18th. The tour continued on until July, when they took a break to prepare for the long-awaited “Live From Hellview” show, taking place on Halloween in Philadelphia, PA. The show was recorded and filmed for a live DVD release. November 2003 saw CKY’s first ever DVD release, Infiltrate Destroy Rebuild: The Video Album. The video contains music videos for all ten songs on their second album, Infiltrate Destroy Rebuild, two music videos from Volume 1, and behind-the-scenes featurettes for each video. December 2003 marks another milestone in CKY’s history, as they finally toured overseas in western Europe. The first European leg being in December, and the second in March of 2004.

April 7, 2004, the band officially began recording their third album. During the recording sessions, the band decided to take a break to play some small free shows around the country. However, near the end of June, the band let go of their live bassist of four years, Vernon Zaborowski. Reminiscent of their situation four years earlier, Chad filled in on bass duties for the remaining shows. CKY went into hiatus for a while, sticking to working on their third album and cutting themselves off from the outside world.

On June 28th, 2005, the band re-emerged with “An Answer Can Be Found”- their third major release and most ambitious to date. Debuting at #35 on the Billboard Top 100, the band once again laid down fierce riffs inter-laden with catchy melodies. At the same time, they finally revealed that their new bassist would be Matt Deis, formerly of the band All That Remains. With Deis, the band hit the road bringing with them a monstrous bass player that really brought their live shows back into full gear. Along with being a fantastic live bassist, Deis also brought the first major change to the band- he’s assisting with songwriting. Being a bass AND guitar player with music theory under his belt, Deis became a vital piece of CKY’s future. The addition of Deis was a shot of adrenaline to the rest of the band, who had shown sheer jubilant and excitement at how things were coming together. It had been a long time since the band played any shows; and it was time to get back out there, kick ass and take names.

CKY paired up with bands Fireball Ministry and The Knives for its first tour around the states since 2003. This tour proved to be one of the best the band had ever done, because the supporting bands were a great match for once. They actually lasted the entire tour, something to boast about given the rocky history of CKY’s other opening acts. The band made their second television appearance at the end of 2005 on the Carson Daly show, performing Suddenly Tragic and Tripled Manic state off of An Answer Can Be Found.

As the band entered 2006, things finally came to a head between CKY and Island Records. Both parties decided it was in the best interests to part ways and end the relationship – issuing this statement:

“Today we were finally released from our contract with Island Records. We had been asking to be let go since 2003 when it was clear that the label had no idea how to market a band that doesn’t write songs about breaking up with their girlfriends. To this day I truly don’t know why they signed us in the first place. They wanted to do our 4th album, but giving them a fourth chance to deliver disappointing empty promises seemed ludicrous. It wasn’t making sense. To be fair, I want to say that I don’t blame them for not knowing what to do with a band that isn’t a flash in the pan. Major labels are afraid of bands that don’t do what they’re told to do. I want to say to Paul Pontius, the guy who signed us… thanks for the 5 years. I’m sure we all learned a lot about how much the music industry sucks and why its all going downhill. The clock is ticking for major labels… to all of our fans worldwide, present and future… thank you for your undying loyalty… the best is yet to come.”