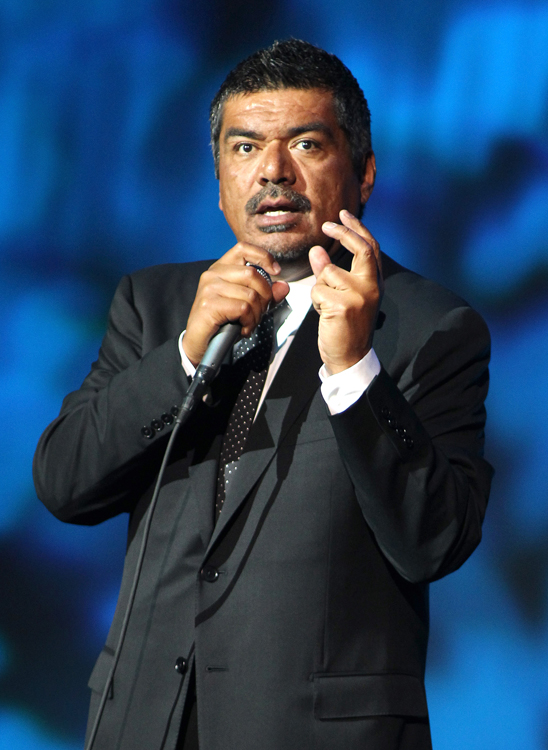 George Lopez is a multi-talented entertainer whose career encompasses television, film, standup comedy and late-night television. For two seasons, Lopez hosted Lopez Tonight, a late-night television talk show on TBS, which represented Lopez’s return to series television after co-creating, writing, producing and starring in Warner Bros. Television’s groundbreaking hit sitcom George Lopez, which ran for six seasons on ABC. George Lopez remains a hit with viewers in syndication on both broadcast stations and cable’s Nick at Nite, ranking as one of the top-rated shows on the network and among the top five comedies and top 20 weekly programs in syndication. George Lopez is one of only four off-net comedies to post weekly ratings gains among households from the 2007–08 to 2008–09 season.

Lopez has risen to become one of the premier comedic talents in the entertainment industry. He has been praised by audiences and critics alike for his work in television, film and standup, as well as his extensive charity work with various foundations.

Lopez recently voiced the character Rafael in the animated blockbuster, Rio, along with Jamie Foxx, Anne Hathaway, and Jesse Eisenberg, and “Grouchy Smurf” in The Smurfs. His other most recent film credits include the box-office hit Valentine’s Day, directed by Garry Marshall; Beverly Hills Chihuahua; Swing Vote; Henry Poole Is Here; and Balls of Fury.

In August 2009, Lopez filmed his second HBO Comedy Special, Tall, Dark and Chicano. He headlined his first HBO Comedy Special, America’s Mexican, in 2007. Lopez has also performed as part of HBO and TBS’s Comic Relief 2006. His acclaimed comedy concert, Why You Crying?, debuted on Showtime in 2004. Lopez released his third standup CD, El Mas Chingon, in 2006, earning a Grammy nomination in the category of Best Comedy Album. Prior to that, in 2004, he was nominated for a Grammy in the same category for his CD Team Leader. In May 2004, his autobiography, Why You Crying?, entered The New York Times Bestsellers Top 20. The book was co-written by Emmy®-winning writer and sportscaster Armen Keteyian. Lopez also was the focus of the award-winning documentary Brown is the New Green: George Lopez and the American Dream.

In 2006, Lopez received a star on the Hollywood Walk of Fame. In addition, Time magazine named him one of the 25 Most Influential Hispanics in America, and the Harris Poll named him one of the Top Ten Favorite Television Personalities. Lopez has made more than 200 television comedy, talk show and hosting appearances, including co-hosting the Emmy Awards and twice hosting the Latin Grammys. In 2001, Lopez hosted a major morning radio show in Los Angeles, becoming the first Latino to headline the key morning slot on an English-language station in one of the nation’s top radio markets.

Lopez has received the Manny Mota Foundation Community Spirit Award and was named Honorary Mayor of Los Angeles for his extensive fundraising efforts benefiting earthquake victims in El Salvador and Guatemala. Other honors include an Imagen Vision Award, the Latino Spirit Award and the National Hispanic Media Coalition Impact Award.

The Lopez Foundation, founded by George, was established to create positive, permanent change for underprivileged children and adults confronting challenges in education and health, as well as increasing community awareness about kidney disease, organ donation, and the military.