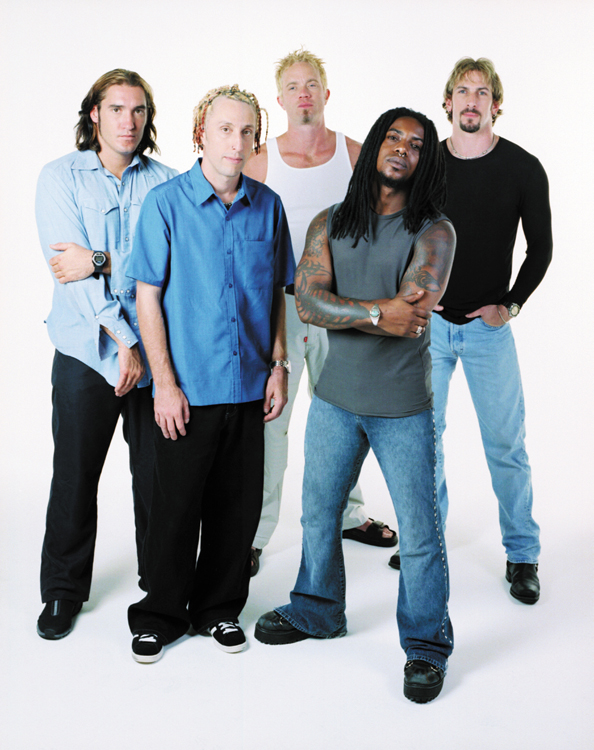 Sevendust: Home Is Where the Hard Is

“I would never trade what we have for anything, but life as we knew it before we left is gone now. Everybody went through their traumas on the road and pretty much lost home. ” –Morgan Rose
“We feel like Sevendust is home to us now.”–Lajon Witherspoon”

It’s been an unbelievable couple of years for Atlanta’s Lajon Witherspoon, Morgan Rose, Clint Lowery, John Connolly, and Vinnie Hornsby collectively known as Sevendust. Since their signing to indie powerhouse TVT Records at the Gavin Radio Seminar in 1996, the outfit has seen one name change (they were forced to drop their original moniker, Crawlspace for legal reasons); nearly 500 live performances; an unprecedented 75 weeks reign on the Billboard Heat seekers chart; 21 months on the road; a nationally-broadcast concert special; the main stage of summer’s two loudest festival tours; and one gold record. The sum result of these two years of exhaustive effort was to propel the group squarely to the forefront of the new hard rock sound, beside other recent upstarts like the Deftones. Not bad for five guys who drummer Morgan Rose refers to as, “a bunch of boys from Georgia who got lucky enough to get paid to play music.”

The band’s self-titled debut, released in April 1997 and comprised of songs the band had written during its years as local favorites on the Atlanta bar/club scene, was admittedly a slow-starter at retail. “I remember, the first week, we sold about 300 records,” Connolly allows, “it took us months and months to even sell a thousand.” But through constant touring and steadfast support from their label, the band’s emotionally downtrodden lyrics and chunky riffs struck a chord with hard rock fans. To provide a boost to the public’s burgeoning awareness of the band, TVT funded ‘Live & Loud,’ half-hour concert special aired throughout the U.S. “It worked out so great,” says Rose. “They simulcast the audio from the TV broadcast on radio stations in each market so we got a lot of exposure. For a band who hadn’t sold a whole lot of records, it was a pretty ballsy move for our label, but it paid off.”

These factors, coupled with the steady growth of aggro radio support-sans controversial pay-for-play tactics-the record struck gold this May. “We were all really psyched up about it,” says guitarist Lowery, “It’s quite an accomplishment.” “It was pretty wild,” continues Morgan, “because I found out we went gold the same day I found out my wife [Coal Chamber bassist Rayna Foss] and I were having a girl. I thought, today is a good day!”

Unfortunately, the band couldn’t make it to their own gold record party in New York, as they were toiling away on their follow-up record, Home. Upon return from nearly two years of touring, the group had agreed that their hometown distractions would be too overwhelming to record their second disc in Atlanta, so they packed up once again and set up camp just outside of Boston. “We were at Longview Studios, which is just a beautiful place; farmland, in a barn, out in the middle of nowhere in Massachusetts,” effuses Lowery. Vocalist Lajon concurs: “There was nothing around except for trees, grass, and horses, so we were able to focus on what we really needed to make a kick-ass second album. I feel like that place brought out magical energy around the band. You always felt like there was an aura or some type of presence there at all times.”

Helping to enhance this creative vibe in the studio and further secure the band’s position at the head of the new rock pack was veteran producer Toby Wright (Alice In Chains, Fishbone, Primus, Korn). Was the band concerned that Wright’s recent Korn connection would renew the comparisons that plagued reviews of Sevendust? Lajon scoffs at the idea, “I don’t care what you fucking say, you can listen to our CD and listen to a Korn CD-they sound nothing alike. I mean, you have some heavy riffs; the same genre of music, maybe-but the two styles are completely different.” Rose continues, “Toby let us pretty much walk in there and do whatever we wanted to do and was brutally honest with us; he didn’t really care how we felt when it came to his opinion. It was pretty intense, but he pushed us-individually and as a band–to the next level.”

The songs on Home are a testament to that collaborative effort, from the stabbing bass line and persistent chorus of the title track to the requiem melody of the record’s first single “Denial.” Meanwhile, staccato riffs and the tempo changes you’ve come to expect from the band back up the album’s second single “Waffle.”

The spacey opening strains of “”Reconnect” belie the song’s message of impending breakdown: “Another day I feel further from myself. If you could wear my shoes then you’ll see. I need a day to recreate.” Lowery says, “`At the point we wrote that, we were really burned out on the road and totally broken down. It’s basically about needing a little bit of time to pull your life together.” One of the record’s highlights is the sonically stunning “”Licking Cream,” featuring guest vocals by bald British banshee Skin of the critically-acclaimed band Skunk Anansie. For bassist Hornsby, the group’s limited fan base stateside was part of the appeal in the collaboration; “At first, we didn’t want anyone on the record because it became a trendy thing to get big stars in the studio to help your own records sell and we didn’t want to jump on that bandwagon. We wanted a really unique collaboration, if any at all.” Once Skin came into the studio to work on lyrics, Rose knew they had struck a perfect match. “She walked in and took control,” he says. `”We had the music together, but we told her we didn’t want to poison her mind with any of our ideas, because we love what she does, and she came up with something totally left of center from what we were doing. It’s an incredible track.”

Days before the group was slated to leave the studio, a late night of recreation led them to the second (and more highly anticipated) vocal partnership on Home. “‘We were listening to the Deftones, playing pool,” says Lowery, “And I said, “Maybe we should get Chino [Moreno] in here to do a track.’ The Deftones and Sevendust both stand apart from other hard rock bands; we’re a little more independent and we sound different, with melodies over the heavy music. The Skin collaboration worked out great and we have less than a week left-it could really be great.” Lajon breaks in, “`We called him at one in the morning and he said, “Man, I’ll be there Friday!’ We were like, “Whoa, wait, not Friday, wait at least until Monday!”‘ By Wednesday, the six had written and recorded the album’s arresting closer, “Bender,” featuring driving guitar blasts and exceptionally feral vocals from the Deftones frontman. “I think we picked two people to come in that really made us sound perfect,” enthuses Morgan, “I don’t think either one of those songs would be nearly as good if they weren’t involved.”

Nor would any the songs likely sound so exceptional if not for Andy Wallace’s adept mixing skills (Nirvana, Helmet, Rage Against the Machine). “`We saw his name for years in CDs and we’d been admirers of his work, so there was definitely a nervous energy that first day,” says Connolly. Lowery continues, “he was really interested in listening to our ideas and working together and he really did an incredible job.”

Before the album’s August 24th” release, Sevendust are taking to the festival circuit again, this time as the loudest feature of the traditionally punk & ska Vans Warped Tour. “To be on the same stage with Tool and Ozzy Osbourne [on last summer’s OZZfest] was definitely the highest point of my career,” says front-man Lajon. “However I think Warped will be cool. We play even better when it’s a little out of our element.”

As public anticipation builds for the release of Home, one might expect the band to be nervous about whether their sophomore release will exceed their debut’s success. But Connolly refuses to second-guess their body of work. “You always want your second record to be better than the first,” he says, “but we can only do what we can do. We worked real hard on it and I think we’ve got a really good thing going.” Rose also seems unconcerned about the unknown outcome, “We don’t feel too much pressure, because we feel the same way now as we did about the first one-we can’t believe the situation we’re in, so any success we get is mind-boggling to us!”

Just five years ago, the members of Sevendust held various day jobs, from pouring concrete to landscaping. After their two year slow burn to success, where do they see themselves in another five? “If we can be the theme music for peoples’ entertainment and we could be a part of their life like that for the next five years, that would be perfect,” says Lowery, “That’s where I want to be.” Based on their unrivaled track record, something tells us that’s exactly where these leaders of the new school will be.