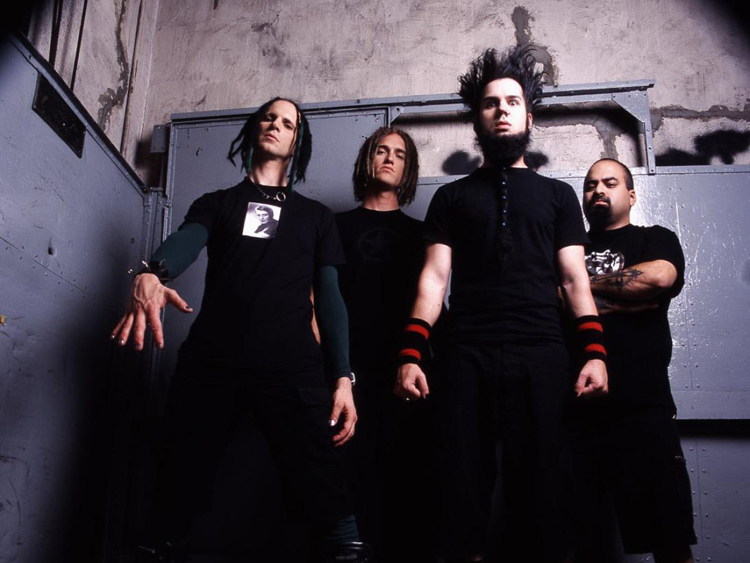 Static-X can’t be stopped. On their sixth studio release, Cult of Static, the Los Angeles industrial metal quartet engages sensory destruction. Due out March 17, 2009 via Reprise/Warner Bros. Records, Cult of Static is loaded with songs that explode on impact. The cybernetic stomp of “Hypure” and “You Am I” bludgeon, bruise and break with precise grooves. Elsewhere, the staccato riffs on “Terminal” crush through an unmistakable guitar tone. Guitarist Koichi Fuduka blazes through incendiary solos, while Tony Campos bolts down demonic bass lines and Nick Oshiro pounds out deadly rhythms. Frontman Wayne Static riffs pure violence and screams out his soul. Static-X venture into dark thematic territory, crafting more expansive, epic tracks than ever before. “Grind 2 Halt” take listeners through a trancey, sonic wasteland of synths and swirling electronic textures buttressed up against a wall of distortion. Wayne and Co. descend into aural oblivion, and they’re bringing heavy metal with them. Get ready to join the cult.

Following 2007′s massively successful Cannibal, Cult of Static is a statement. Wayne describes the album best. “Our sound is always evolving. This record has a lot more depth to it. On Cannibal, I tried to simplify things more, and on this album, I didn’t worry about that so much. I went back to layering the music and making it moodier. It’s just as heavy as the last record is, but it’s bigger. It’s got very epic moments. There are extremely heavy parts, but this is also the kind of record you can chill out to with headphones on. For me, it was about having a balance between fast, driving songs and dreamy, electronic passages. You can completely escape with it.” It’s easy to drift off into delirium during the six-minute “Tera-fied.” The song proves to be a haunting ride that shifts from vampiric trance to brooding metal, complete with foreboding samples. It’s all driven by Wayne’s trademark hypnotic howl.

Since their breakthrough debut, Wisconsin Death Trip, Static-X have sold over three million records, and they’ve completed numerous successful world tours. Cult of Static is the culmination of over a decade of destruction. “Lunatic” is Cult of Static’s opening call-to-arms. Included on the Punisher: War Zone soundtrack (available November 25), Static-X offer up a taste of what’s to come with “Lunatic.” Relentless and raw, the song brandishes a ripping groove and an impenetrable barrier of guitars. The version on the soundtrack certainly kills, but the album cut features a solo by legendary Megadeth frontman Dave Mustaine. “I’ve been a huge Megadeth fan for years, and we’ve toured with them twice. Dave and I really hit it off on the road. His lead style is one of the most distinctive styles out there. There’s something amazing about it. When you hear him solo, you know it’s him.”

Beyond working with Mustaine, Wayne co-produced Cult of Static with John Travis [Kid Rock, Buckcherry, Social Distortion]. However, this time, they recorded at Wayne’s new home studio. “Recording at home gave me the freedom to work any time. I could write at my own pace, and it was much more comfortable. Most of this record was written between midnight and six in the morning. This whole album is an experiment.” First single “Z28″ captures that immediacy and raw emotion. It possesses a rock n’ roll vibrancy forged to Static-X’s electronic sensibility.

Once again, Wayne has followed his creative impulses to the fullest. “This record is definitely the most personal for me. Since I got married last year, there have been lots of emotions. Music is always going to reflect where you’re at. It’s been a really inspiring time. The last year of my life has been the greatest. Doing OZZfest 2007, Gigantour and the two headline tours made it the best, but I’m still a workaholic. It all comes down to hard work. I don’t take vacations. I’m writing the next record now, and that’s what it takes.”

There are no days off in heavy metal. While recording Cult of Static, Static-X also dropped a live CD/DVD compilation entitled Cannibal Killers in October 2008. The collection showcases the band decimating a sold out crowd, and it captures their frenetic energy. “I’m a big believer in entertainment,” exclaims Wayne. “Our shows have a party atmosphere. We have a good time, and we invite the crowd to have a good time with us. I want people to forget about everything for the hour we’re onstage.” That’s why the fans still pack houses all over the world for Static-X on every tour. No doubt, 2009 will see the band on the road continuously again.

The title says it all. “Our fans are so loyal. I’m jokingly calling it a cult, but our fans have that kind of loyalty. We’ve been putting out records and touring for ten years now, and I think we can get away with this title. We have this massive group of diehard followers. We’re one of the biggest underground bands ever.” However, on Cult of Static, the band resonates far past the underground.