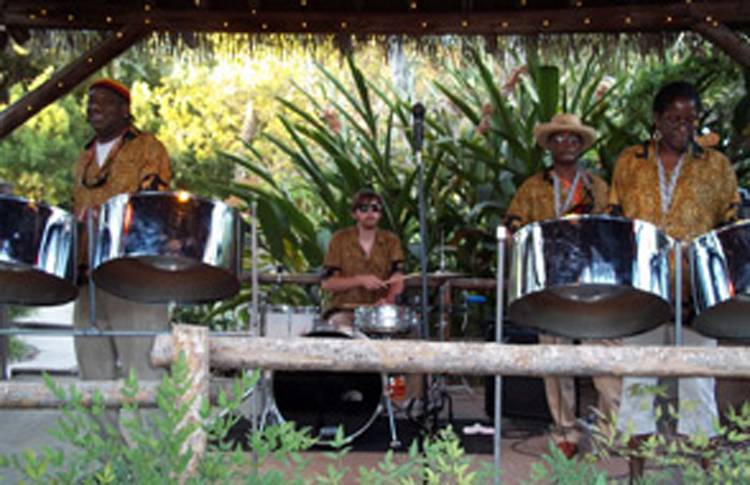 About Steel the Band

Steel The Band, San Diego’s finest steel drum band is ready to take you on a trip to the islands. Come join the party and celebrate as we sing and dance to the rhythm of the Pan!

TROY PEETS – also known as RASTA has been playing Pan since he was 13 years old. In his early years he performed with his Jr. High School Band and made it to the St. Thomas Virgin Island High School Band, which had 80 members. Troy quickly learned to be a leader and soon formed his own steel drum band the Miniature Steelers who played at many of St. Thomas Virgin Island major hotels and venues. He currently teaches Steel Drum music at Marian Catholic  High School in San Diego California. He brings to Steel The Band Leadership and knowledge of all Caribbean style music.

ROSALIE THOMAS also know as (Rose) aka (Lady Rose) involvement with music encompasses  her professional talents. Starting at the O,Farrell School of Performing Arts in San Diego California. Her major being in stage productions and voice. She has played lead performances  in stage productions with her natural talents. Rose has toured overseas and has been playing steel drums for over 5 years. Don,t miss this opportunity to encounter the voice of choice that will ripple the waves of musical tones, then glide your soul with harmony to inter heights of great music.

ADRIAN AHEARN is our bassist and musical director. He holds a Bachelor of Music, Performance/Jazz study degree. Graduating  in 1996 from SDSU. He is comfortable  performing on various steel drums, from the tenor  pan to the bass. He is a competent singer and songwriter. His charismatic  vocals as a front  man and his duets with Lady Rose are truly remarkable, Adrian is the consummate   musician, always  practicing, striving for  perfection.

Sugaray and the Brothers Funk