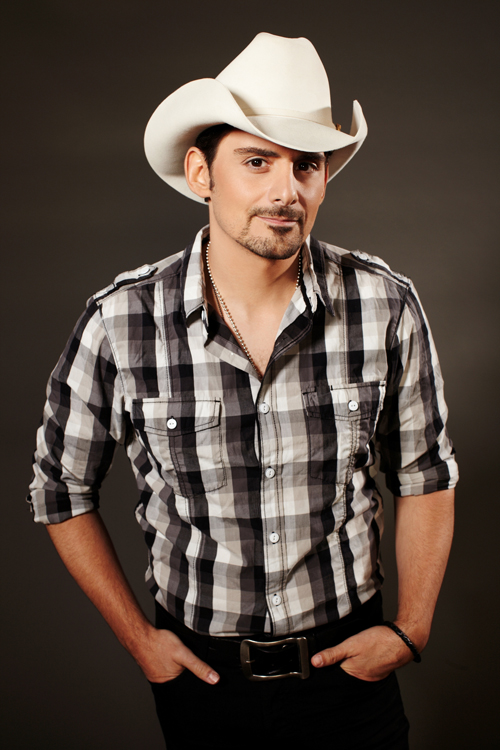 If ever an artist has earned the right to title an album This Is Country Music, it’s Brad Paisley. It’s not because he’s the Country Music Association’s reigning Entertainer of the Year or because his H2O Tour was 2010’s top country trek in attendance or because he’s sold more than 12 million albums and scored 18 #1 hits at country radio.

It’s not because he’s been performing professionally since he was 13 as a regular on Wheeling, West Virginia’s famed Jamboree USA, becoming the youngest person ever inducted into the Jamboree Hall of Fame. It’s not because he’s won 14 CMA Awards, including Male Vocalist of the Year three times or because of the record-setting five consecutive Academy of Country Music Male Vocalist honors that count among his 14 ACM wins.

Paisley’s ninth studio album is titled This Is Country Music because this is the singer/songwriter/guitar virtuoso’s heartfelt homage to the music he’s loved since childhood. It’s a multi-faceted tribute to all the elements that embody country music from the young artist who single-handedly made Grand Ole Opry legend Little Jimmy Dickens cool to a new generation of country fans and who collaborated with the late Buck Owens, providing him with his only CMA Award win. Paisley’s well-documented march toward stardom has been an inclusive journey that has taken many of his heroes with him along the way.

He continues to do that on This Is Country Music. The title track and lead single name checks some of the format’s legendary hits such as George Jones’ “He Stopped Loving Her Today,” Merle Haggard’s “Mama Tried” and Johnny Cash’s “I Walk the Line.” “The first song written for this album was ‘This Is Country Music,’” he says. “If you are going to call an album ‘This Is Country Music,’ the last thing I want to do is have somebody listen to it and have them say to themselves, ‘No, it’s not.’ So in many ways, this is the ‘countriest’ album I’ve done. The heart of it is totally country. I even threw a song out on this project that I loved, that could land on a future project, because it didn’t say ‘this is country music’ to me.

The album’s second hit single, “Old Alabama,” finds Paisley not only sampling Alabama’s classic hit “Mountain Music,” but reuniting Randy Owen, Jeff Cook and Teddy Gentry to perform on the track. “It’s really a combination of what they do and what I do, which is not hard because I’ve ripped them off so many times over the years,” Paisley says with a smile. “They’ve been a major inspiration to me. I saw them play live many, many times. I remember going to the Civic Arena in Wheeling when they played and their opening acts were Clint Black and Lorrie Morgan. They were one of the first arena acts in country music. They were the first to really bring semi-tractor trailers down the road and have a big production.”

Alabama is an obvious influence for a country musician who came of age in the ‘80s, but on This Is Country Music, the three-time GRAMMY® winner paints a more expansive, textured portrait of the genre he loves. “I’m trying to do something brand new utilizing the influences that made me who I am,” Paisley says. “Some of them are not necessarily right within country music, but they are more important to modern country than you might think. There are influences that come into play like Eric Clapton. When I try to play or harness anything that has some soul to it, I’m usually channeling him . . . Don Henley and the stuff that The Eagles did in the ‘70s, they are responsible for what you hear on country radio now.”

Paisley wrote or co-wrote 12 of the album’s 15 tracks, recruiting an eclectic cadre of special guests, including Henley, Clint Eastwood, Sheryl Crow, Marty Stuart, Carl Jackson, Carrie Underwood and Blake Shelton. Henley lends his distinctive vocals to “Love Her Like She’s Leavin’.” “It’s a real romantic song, and it feels like something that either he would have written or his band, The Eagles, would have done,” says Paisley. “So I thought he would be the perfect voice on the song.”

Paisley first met Eastwood at the White House during a Kennedy Center Honors reception. The legendary actor and his wife, Dina, then enlisted Brad to perform for one of their charity events in California. “When I was working on this record, and we wrote this instrumental, I had Eastwood in mind,” Paisley says of the tune he co-wrote with Robert Arthur and Kendal Marcy. “We started writing what felt like a western, and I thought we could call this ‘Eastwood.’”

In addition to always including an instrumental on every album, Paisley is also known for recording a gospel song on every album since his 1999 Arista Nashville debut, Who Needs Pictures. This time around he revives the classic “Life’s Railway to Heaven,” the first song he ever sang in church when he was nine years old. “I had Marty Stuart, Sheryl Crow and Carl Jackson all singing harmonies on that,” says Paisley, for whom 2011 marked his 10th anniversary as a member of the Grand Ole Opry. “It turned out great. Wait until you hear their harmonies.”

On This Is Country Music, Paisley once again works with longtime producer Frank Rogers and co-writes with such frequent collaborators as Lee Thomas Miller, Ashley Gorley, Tim Owens, Kelley Lovelace and Chris DuBois. He and DuBois wrote the title track and penned more verses than would fit into a radio single, so Paisley opted to use some of the extra verses as intros for other songs throughout the record. The result is a wonderful narrative thread that gives the album an even more cohesive feel, like a great movie reeling with a vibrant cast of characters such as the girl who is “Working on a Tan,” an energetic ode to summer that finds Paisley channeling surf guitar legend Dick Dale.

“A Man Don’t Have to Die” is a sobering tale that many people will find easily relatable about living in difficult times. “One of Those Lives” is a poignant song about a childhood cancer. “New Favorite Memory” is a sexy number about falling in love with someone all over again during an unexpected moment.

This Is Country Music also includes duets with two of Paisley’s fellow country hitmakers, Carrie Underwood and Blake Shelton. “It’s a fun song about getting somebody off your mind,” Paisley says of “Don’t Drink the Water,” a duet with Shelton, who will be joining him this summer on his H2O II: Wetter & Wilder World Tour. He and Underwood join forces on the incredible ballad “Remind Me,” about a couple looking to rekindle the spark in a relationship. “It’s a song about the conversation a couple would have. It could be seven months into the relationship or it could be seven years, but everybody’s been there,” Paisley says. “I love the honesty about that song.”

Paisley and Underwood had previously teamed on “Oh Love,” a track from his 2007 album, 5th Gear, and the two friends have hosted the last three CMA Awards telecasts. “There is no limit to how high she can sing. She’s amazing,” Paisley says. “I asked, ‘Is there any note you can’t hit?’ And she said, ‘I don’t know,’ and I was playing it for her, and I said, ‘How about high G,’ and she went, ‘Yeah, I can hit that.’ There’s honestly nobody better, and her instincts were perfect, too. When she came in to sing, every take was perfect. She 100% nailed it every time.”

In recording This Is Country Music, Paisley’s goal was not only to sonically capture the varied tones and textures of country music, but to lyrically reflect the lives of the people who love it. “There are stories and observations in songs like ‘A Man Don’t Have to Die.’ I didn’t write that song, but I heard it and instantly said, ‘This is exactly where I want to go with this album,’ because it is absolute reality for some people,” he notes. “In the title track, when I sing ‘This is real. This is your life in a song,’ not every one of these songs will be you at this moment, but several, I guarantee, will be. If they aren’t right now, a lot of them have the potential to be a story that applies to your life. That’s our job in country music.”