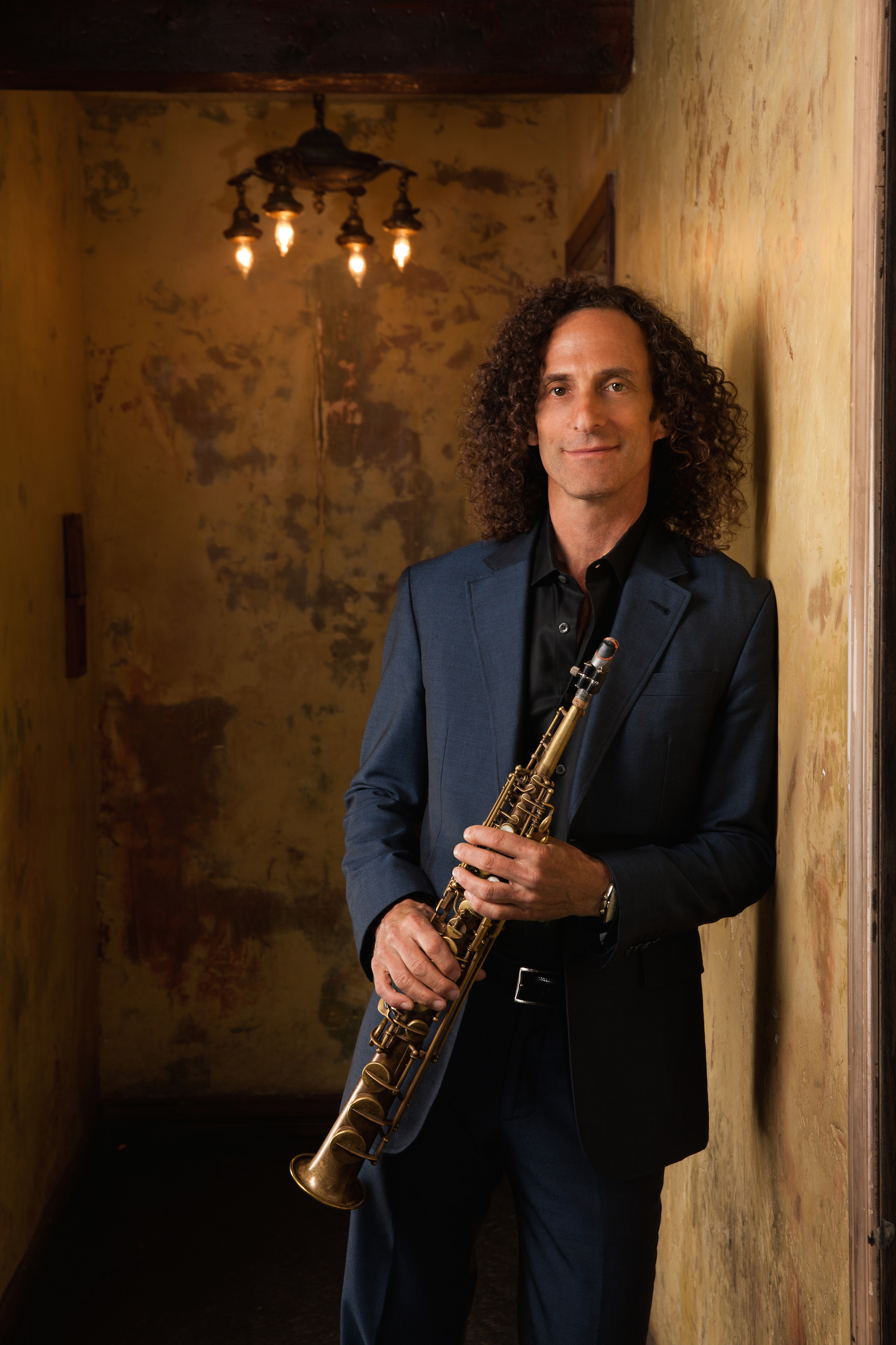 Kenny G’s musical style has been called, smooth, soulful, melodic and romantic. Kenny G’s trademark jazz/rhythm and blues/pop and funk places him in a rare stratosphere of artists. The last two album releases have forged into new musical territory, won new fans and made chart and sales history.

Kenny G had his just “moment” one night when he was 10 years old, watching a saxophone player on the Ed Sullivan Show. There have been many moments since: including being named Billboard Magazine’s “Jazz Artist of The Decade” (’80s), being named top instrumentalist in Playboy, Downbeat, and Rolling Stone Magazine’s Readers Polls, performing at the 1993 Presidential Inauguration, performing at the 1996 Democratic National Convention, winning a Grammy Award in 1993 for “Forever In Love,” winning the American Music Award for Favorite Adult Contemporary Artist in 1994 and being named on the R.I.A.A. (Recording Industry Association of America) list of the 25 Top Selling Artists of All Time. Not to mention the fact that his eight albums have sold over 36 million copies worldwide to date. The Moment is Kenny’s first album of original material since the release of Breathless in 1992 and his ninth album to date.

The 12 song album includes a soulful duet with Toni Brampton titled, “That Somebody Was You.” Grammy award winning songwriter/producer/singer Babyface lends his voice to a spiritually inspired duet, “Every Time I Close My Eyes.” .Kenny explains, “The vocals by Toni Braxton and Babyface are wonderful additions to my instrumentals and I am more proud of these vocals than I have ever been of any vocal songs that have been on any of my past albums.I feel that this album has the growth and diversity that I wanted to achieve without losing the essence of myself and my sound.” Babyface wrote “Everytime I Close My Eyes” and co-wrote the Braxton duet with Kenny and Walter Afanasieff.

The other songs, all written and produced by Kenny include a Latin Rumba called “Havana”; a romantic classic “Always”; the Olympic inspired anthem “The Champion’s Theme”; “Eastside Jam”; an unforgettable ballad “Moonlight”; “Gettin’ On The Step”; “Passages”; “Northern Lights” and “Innocence”. All of these songs represents some very inspired moments for Kenny G, in his words, “My inspiration comes from many different places and at very unexpected times. That’s the beauty of creativity. I feel that really experiencing the moments of our lives is the only way to really live.”
After his mother rented him his first saxophone, Kenny played in the school bands. His musical education, however, consisted mainly of him staying home and practicing along with records (mostly of Grover Washington Jr.) trying to emulate the sounds that he was hearing. Kenny’s high school band director got him his first professional job as sax soloist for a Barry White show in his hometown of Seattle. Kenny was just 17 years old.

At the University of Washington, Kenny’s college band director (Roy Cummings) encouraged him to listen to some of the all time great sax players such as Charlie Parker, John Coltrane and Sonny Rollins and this increased Kenny’s musical vocabulary.During these college days (1974 – 1978) Kenny played with a local soul group called Cold, Bold & Together.
22 year old Kenny Gorelick joined Jeff Lorber’s band and toured the USA for the first time. It was during this stint that Arista Records President, Clive Davis saw Kenny play and later approached Jeff Lorber with the idea of a Kenny Gorelick solo album. His debut album, Kenny G was recorded in 1982.

The next two albums, G-Force and Gravity were collaborations with producer Kashif and the late Wayne Braithwaite. “I learned a lot about producing and writing during this period and also what kind of music was really me.”

But it wasn’t until 1986 with his fourth album, Duotones, that Kenny felt his true voice finally came out. Kenny played all of the instruments on the first single, “Songbird” and produced the sound that has been his signature ever since “Songbird” went to # 4 on the Billboard Pop Chart. Next, the self produced, multi-platinum, Silhouette, Kenny’s fifth album, produced the mega-smash “Silhouette.”

Kenny wrapped up the ’80s with his sixth and only double album to date, Kenny G Live, which Kenny says “captured the live experience that I felt was more of a true representation of my sound.” Kenny’s first full length home video was also derived from this project. Kenny G Live has sold over three million units nationally and the video is double platinum.

Breathless, the seventh album for Kenny, made history and broke chart and sales records. The album set a record by staying # 1 on the Contemporary Jazz Chart for over 100 weeks and made history by becoming the # 1 Instrumental Album of all time and propelling Kenny G into the superstar universe and the #1 Instrumentalist of all time. The single, “Forever In Love” from the album earned him a Grammy Award and the album after 4 years since it’s release is still on the Billboard Pop Album Chart.

What is now a holiday classic, Kenny G’s eighth album, Miracles: The Holiday Album (released in ’94), shattered a long standing record to become the biggest selling holiday album in history and the only holiday album to reach # 1 on the Billboard Album Chart in three decades. “I was reluctant to record a Christmas record as I thought that making a Christmas album was in some way making a religious statement. But after first experimenting with the recording of ‘White Christmas’, all I heard was a beautiful song with a beautiful melody and I was hooked.”

Kenny G has pioneered his career with his distinctive “sax sound” which blossomed into # 1 albums, # 1 singles, Grammy, Billboard and American Music Awards, sold-out tours and eventually re-writing chart history. His accomplishments are impressive by an artist standards, many are unprecedented by any other instrumentalist. And now stands Kenny G’s finest work to date, The Moment.