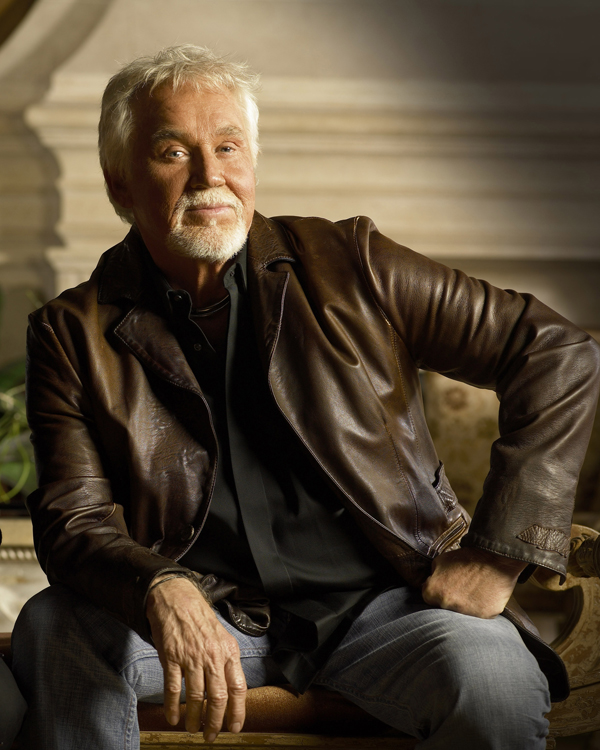 March 7, 2011 marks another new chapter in the remarkable career of music legend and American icon, Kenny Rogers. That is the day his first inspirational gospel album, The Love Of God, becomes available exclusively at Cracker Barrel Old Country Store® locations nationwide. Featuring 12 uplifting songs sung only the way Rogers can sing them, the record includes all-new recordings of classic hymns and gospel and contemporary songs that have touched him musically and spiritually through the years, dating back to his childhood growing up in Houston where he regularly attended church with his family. At the heart of the record is hope and peace.

Rogers, one of music’s legendary voices, has put his indelible stamp on classics like “Will The Circle Be Unbroken,” “I’ll Fly Away,” “Amazing Grace” and “In The Sweet By And By” and turned in beautifully poignant performances on more recently composed songs such as “Peace” (written by Michael McDonald & Beth Nielsen Chapman), “Grace” (written by Michael W. Smith & Martin Smith) and “The Rock Of Your Love” (written by Vince Gill, Al Anderson & Leslie Satcher). Guest artists appearing on the album include The Whites on “I’ll Fly Away,” Winfield’s Locket on “In The Sweet By And By” and Point of Grace on “Circle Of Friends.”

“What an incredible album this has turned out to be,” Rogers says of The Love Of God. “It seems I have a personal relationship with every song on it. „In The Sweet By And By’ was my mom’s favorite song. When I was a kid, as I was leaving to go to school, I remember hearing her sing along with that song on the radio as she did her morning ironing. Music is by far the best “memory creator’ I know, and that memory is very special to me.”

Marked by strikingly fresh musical and vocal arrangements, the warm and inviting album is quite eclectic, yet a common thread running through each of the songs ties the project neatly together. From the exhilarating opening track, “Will The Circle Be Unbroken” – which cleverly intertwines country, R&B, gospel, bluegrass and choral music, to the sweeping strings and heartfelt vocal performance on the calming “Peace,” to the perfectly rootsy “I’ll Fly Away” (the most authentic bluegrass recording of Rogers’ career), featuring unmistakably genuine harmony vocals by The Whites, The Love Of God begins with three fascinating musical statements that set the stage for a stirring collection of songs.

“The trick to doing a good concept record is surrounding yourself with unique musicians, singers, and creative talent,” Rogers says. “When you hear „I’ll Fly Away,’ there is no question that The Whites are singing. Anything they sing takes on their own special sound, and it feels perfect for this record.”

“The Rock Of Your Love” is delivered in soulful style, and the easy-flowing “In The Sweet By And By” is sweetened by the angelic harmonies of Winfield’s Locket and the dazzling musicianship of Bryan Sutton (acoustic guitar and mandolin), Jerry Douglas (dobro), Viktor Krauss (acoustic bass), and Larry Franklin (fiddle).

Rogers says of „In The Sweet By And By,’ “Listen closely to the background voices and you’ll hear the unique harmonies of country duo Winfield’s Locket. They – like me – have been influenced by gospel music from a very early age. The sisters have a sound based on the way they layer their harmonies, the timbre of their voices, and the way they phrase. I was so glad we could find a moment to share on this album. This has always been one of my favorite songs, and if it wasn’t before, it is now.”

Listeners will also hear Rogers’ impassioned Ray Charles-esque performance on the gospel/R&B-tinged “He Showed Me Love”, the soaring, spine-tingling “Grace,” the reflective acoustic-flavored “What A Friend We Have In Jesus,” the breezy reassurance of “Circle Of Friends” featuring radiant harmony vocals by Point of Grace (whose original recording of the song hit No. 1 on the Contemporary Christian Chart), and the anthemic “For The Love Of God.”

“Twenty-seven #1 hits on the Contemporary Christian Radio Charts – that credential speaks volumes about the talent of Point of Grace,” Rogers says. “’Circle Of Friends’ was originally a song they had recorded, and I did the unthinkable and asked them to join me on my version of their song. I couldn’t imagine this without their influence. They were nice enough to say yes, and I am so glad they did. If you haven’t heard the song yet, you’ll be glad they did as well.”

The album fittingly culminates with two classics – the soothing “Amazing Grace” and the stripped-down a cappella serenity of “Leaning On The Everlasting Arms.” According to the multiple Grammy Award-winner, “Amazing Grace” is a song Rogers sang when he was in his first church choir group as often as they possibly could. He has said the standard has undoubtedly had an impact on his life and music, and upon first listen it is immediately evident he has a strong connection with the popular hymn. Rogers’ tender vocal alongside a large, dynamic choir and swirling orchestration make for a beautifully touching rendition. “Leaning On The Everlasting Arms” is delivered in a refreshingly sincere way – with only Rogers’ emotive vocal and a faint church organ off in the distance – a surprising, yet perfectly effective and honest way to close the album.

“The Love of God is the culmination of an idea I had been thinking about for years but never had the opportunity to bring to life,” Rogers says. “To all of the wonderful musicians, vocalists, and songwriters who lent their amazing talents to this record, I want to thank you for making it so special. I am so grateful to have had the opportunity to do this album. It has been both a musical and religious awakening for me.”

Known for instantly identifiable sweetly raspy vocals and an extraordinary ability to vividly inhabit each song he performs, Rogers has sold more than 120 million records worldwide and recorded more than 65 albums during his storied 52 years in show business. His long list of timeless classics includes an impressive 24 #1 hits – “The Gambler,” “Lady,” “Lucille,” “She Believes in Me,” “Islands in the Stream,” and “We’ve Got Tonight” among them. Two of Rogers’ albums, The Gambler and Kenny, are featured in the About.com poll of “The 200 Most Influential Country Albums Ever”, and his Greatest Hits album has sold over 24 million copies worldwide to date. He is the RIAA’s 8th best selling male artist of all time with 1 Diamond album, 19 Platinum albums and 31 Gold albums.

Rogers has received hundreds of awards for his music and charity work, including three Grammys, 11 People’s Choice Awards, 18 American Music Awards, eight Academy of Country Music awards and five Country Music Association awards. Remaining a popular entertainer around the world, Rogers, voted the “Favorite Singer of All-Time” in a 1986 joint poll by readers of both USA Today and People, still loves touring and recording new music.

Rogers is one of very few artists who have enjoyed successful careers in such a variety of genres – jazz, folk, rock, country and pop. Houston-born Rogers formed his first band while in high school in 1956 – a rockabilly group called The Scholars (they performed on American Bandstand) – and has never quit making music. He played stand-up bass in the jazz group the Bobby Doyle Trio, and later became a member of the popular folk group, The New Christy Minstrels. The spotlight started focusing on Rogers when his group, The First Edition, scored their first hit, “I Just Dropped In (To See What Condition My Condition Was In), which was followed by the pop and country chart success of “Ruby, Don’t Take Your Love To Town.”

Rogers’ solo career shot into the stratosphere with the #1 hit, “Lucille,” which was named the CMA’s Single of the Year and was certified Gold. “Daytime Friends,” “Sweet Music Man,” and “Love Or Something Like It” continued his run of success. Then came “The Gambler,” a story song so vivid it not only delighted country and pop fans, it also became a TV movie, starring Rogers himself in the title role. The movie spawned four follow-ups, making it the longest running miniseries franchise on television. The five Gambler mini-series have attracted over 100 million viewers nationwide and launched a second career for Rogers as an actor on television and movies.

Rogers consistently finds songs with universal appeal. Through the course of his career, he has attracted fans with an incredible range of music from country to soul to pop. “I’ve never considered myself a great singer, but I am a great storyteller,” Rogers told Billboard magazine, also noting that he feels his strength as an artist is in finding great songs. In the 1980s, Rogers’ romantic country hits “Through The Years,” “She Believes In Me,” “You Decorated My Life,” and “Lady” – the biggest song of his career – quickly became classics. “There are a lot of songs that may have initial success but don’t linger the period of time those songs have,” Rogers says. “They do take a different value in your heart when they have that kind of staying power that represents your success and represents a feeling and a thought. A song like that becomes a part of your soul.”

In 1999, after forming his own record company, Dreamcatcher Entertainment, Rogers returned to the charts in a big way with the hit, “The Greatest,” and when the follow-up, “Buy Me a Rose,” hit #1 in 2000, Rogers, at age 61, became the oldest artist in chart history to have a #1 solo record in any format, proving his talent was just as vibrant and meaningful as it was when he first started out. That same year, the Recording Industry Association of America awarded Kenny the prestigious Diamond Award celebrating sales of more than 10 million albums for his Greatest Hits album (sales to date have exceeded 24 million).

With his unique storytelling ability and soulful voice, Kenny has continued his amazing run into the 21st century with a critically acclaimed album (Water and Bridges) and hit single, “I Can’t Unlove You,” a gold certified record (21 Number Ones), and now, the sweetly timeless The Love of God. Kenny’s relevance in the world of music and pop culture has never been stronger.