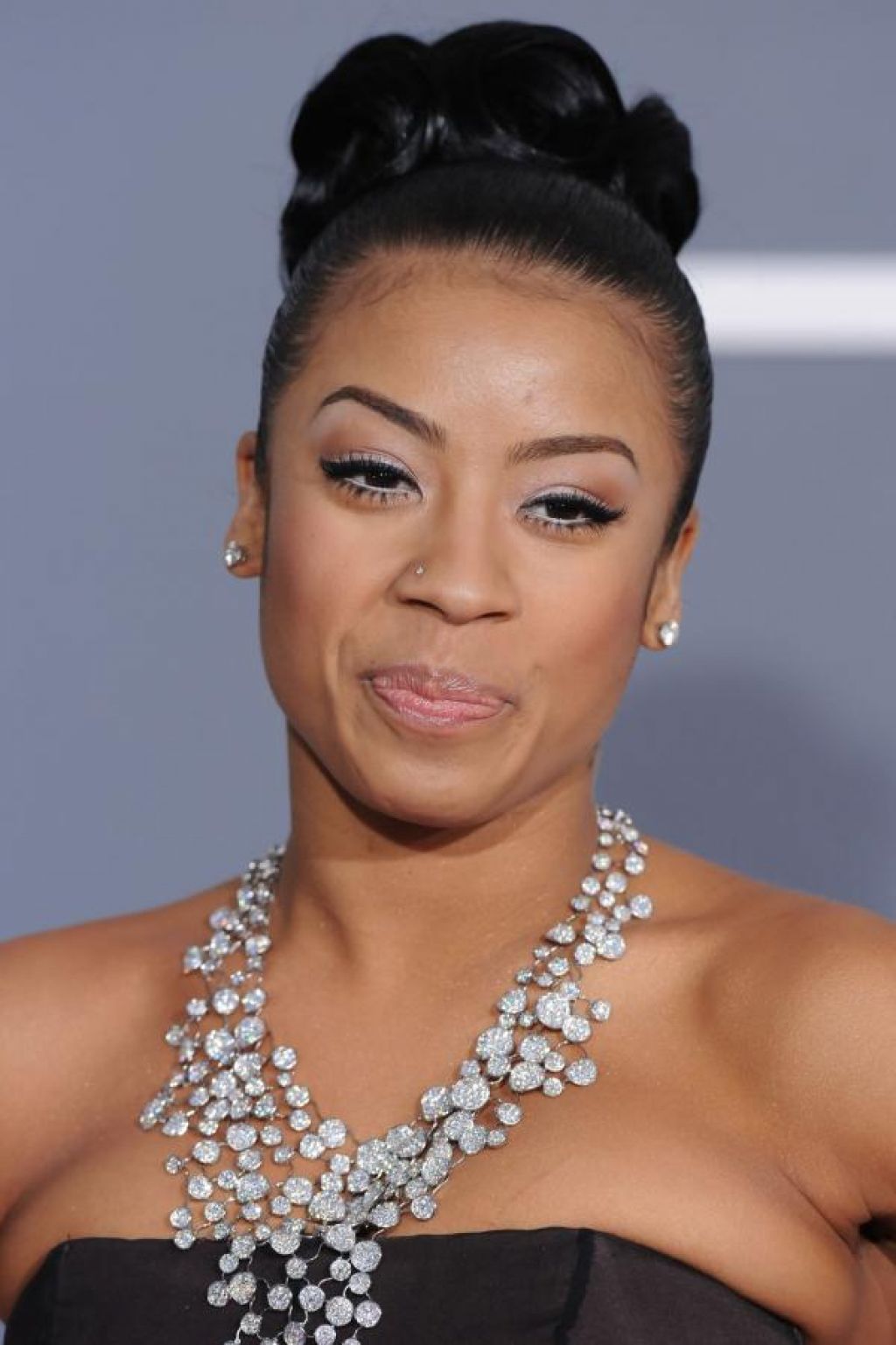 Often it is said that the only constant in life is change. Four-time Grammy nominated, multi-platinum-selling singer/songwriter KEYSHIA COLE knows well about enduring the seasons of change, particularly matters of the heart. With the release of her fourth album CALLING ALL HEARTS (Geffen Records), in the true spirit of full disclosure, Keyshia pours her heart and soul on all 14 tracks of her latest masterpiece. Enlisting powerful collaborations with Nicki Minaj, Faith Evans, Tank and her mother Dr. Yvonne Cole, and partnering with production giants Jimmy Jam & Terry Lewis and Timbaland, Keyshia made this project a labor of love and an true expression of life…Keyshia’s life.

According to KEYSHIA, “I wasn’t that optimistic about finding true love.” In the early stages of developing CALLING ALL HEARTS, Keyshia had all but given up on the prospect. “I decided when I did get back into the swing of things I’m not dealing with anyone who’s not on my level.” Enter Daniel “Boobie” Gibson, point guard for the Cleveland Cavaliers. The undeniable connection between the two not only transformed Keyshia’s heart, but also soon after the birth of their son, Daniel Jr., she was able to pour out her heart in signature fashion to complete this, her 4th album.

KEYSHIA’s journey is reflected in the depth she brings to each song on CALLING ALL HEARTS. Being transparent is nothing new and has resonated in her music since her 2005 debut, The Way It Is. To date Keyshia has scored two #1 R&B/Hip-hop albums and seven #1 singles, two of them platinum. In addition, she has amassed six Top 40 hits on Billboard’s Hot 100 singles chart in the span of five years. Her 2nd album, 2007′s Just Like You, debuted at #1 on Billboards R&B/Hip Hop chart (#2 nationally) and was propelled by three #1s, the platinum “Let It Go” featuring Missy Elliott and Lil’ Kim, “I Remember” and “Heaven Sent,” while “Shoulda Let You Go” featuring Amina hit the Top 10. The groundbreaking album garnered Keyshia four Grammy nominations, including Best Female R&B Vocal Performance and Best Contemporary R&B Album, and an American Music Award nomination. By her 2008 third release, A Different Me, Keyshia not only debuted #1 on the R&B chart for a second time, but captured the R&B Top 10 singles chart with “Playa Cardz Right” featuring 2Pac, “Trust” featuring Monica and “You Complete Me.”

Reflecting on her career, KEYSHIA humbly acknowledges “the realities [in my songs] allow people to come into my life to let them know not only am I speaking from a place they can understand, but also they can see that I’ve been to the bottom and made it to the top.” The first single from CALLING ALL HEARTS, “Long Way Down,” was co-written by Keyshia and its edgy yet sultry video showcases her fiancé Daniel in the edgy yet sultry video. The melodic jam with synths and piano riffs instinctually piqued Keyshia’s interest and she was eager to record. “It not only explains how I feel about Daniel, but how I felt before. I’m still a very strong and independent woman but also learning to love and appreciate someone who actually loves and appreciates me – I’ve grown up.”

For the Oakland, California native, a keen sense of self-awareness propelled her to grow up quickly as she maneuvered through the terrain of acceptance being adopted at an early age. “There have always been situations where I ended up alone because other people were trying to take care of themselves and forgot about me. It just made me realize at a younger age if you don’t start preparing for this [life] now, it’s going to be a problem.” With its intense guitar strums and snare, hence the making of “Where Would We,” a cautionary tale about self-love and introspection was born. This Antwan “Amadeus” Thompson produced track punctuates KEYSHIA’s growth.

“Sometimes” is a classic pop ballad featuring a stirring guitar crescendo that KEYSHIA co-wrote with Justin “Justa Beast” Graham that identifies with the preparation for life’s transitions. She credits motherhood and the birth of her son Daniel Jr. with heightening her awareness and reverence for the realities of life. “I know people think I’m a hard chick but I’m really caring. He makes me feel like I want to give more.

The emotional chords KEYSHIA strikes on CALLING ALL HEARTS paint a picture of surrendering to the process, wherever the road may take you. “Two Sides To Every Story” is a mid-tempo jam with groovy piano licks in which Keyshia draws inspiration for life’s seasons from Ecclesiastes in the Bible. Pulling from her personal experiences with romantic love and familial love, “I addressed the fact that people outgrow each other and some people grow in different directions. You have to take it for what it is with me. You have to live your life and I think there is a time for everything.”

Collaborating with R&B singer/songwriter/producer Tank, “Tired of Doing Me” is a synergistic effort that KEYSHIA describes as, “we figured out where each other existed via the creation process and then we made a wonderful song.” The sexy slow jam has distinct male and female points of view. As Keyshia characterizes, “our generation is always talking ‘I’m doing me.’ I wasn’t wanting for anything before Daniel, but you are missing out when you don’t have somebody you can share life, your dreams and love with.”

In the process of creating this album, KEYSHIA also connected to her hip-hop sensibilities on “If I Fall In Love Again.” Featuring R&B diva Faith Evans and highlighting a sample from The Notorious B.I.G.’s “The Warning,” Keyshia ironically wrote the candid tale about girlfriends giving advice to one another. This collaboration gave the ladies a long awaited opportunity to work with one another. KEYSHIA confesses that arranging Faith’s background vocals was a confidence booster, “it opened a door in my mind for another skill set once I am finished performing. I can’t wait to start writing more for others.”

Nicki Minaj and KEYSHIA kick the door down with the up-tempo and edgy jam “I Ain’t Thru.” The girl’s anthem musically motivated Keyshia to go in with a sound that she hasn’t tried previously. “Nicki knows what she wants, and I can appreciate that. We were like, you know what, all y’all need to move out my lane, and this didn’t exclude anybody. You do you, I’ll do me and we’ll be good.”

Amidst the pulsating drum beats and a groovy melodic flow is Keyshia’s fun loving, radio friendly, dance floor jam “Take Me Away.” Reuniting with her debut album producer Chink Santana, and co-produced by Irv Gotti, the ride or die chick anthem exhibits a lighter side of Keyshia. As the chorus boasts “I love my baby…I’m your woman, oh baby take me away” the expression of love Keyshia admonishes in the lyrics, paint a lyrical picture of her relationship as equal parts romantic and engaging.

If CALLING ALL HEARTS could be broken into a section entitled pre and post-Daniel, KEYSHIA is clear, “mentally I had given up. I was resigned to sit back and to do my music, live life and do it big. That’s how I felt.” On the pre-Daniel side, “Last Hangover,” produced by and featuring Timbaland, “Confused In Love” and the Jimmy Jam & Terry Lewis produced “So Impossible” would reside. On the post-Daniel side songs would include, “What You Do To Me,” “Better Me,” an inspiring pop anthem penned by Diane Warren where Keyshia acknowledges, “I feel appreciative of how everything came about and how God is moving in my life. Moving certain people out and placing others in. I’m accepting to the change.” And culminating the acceptance and humility for the journey would be “Thank You” featuring Keyshia’s adoptive mother Dr. Yvonne Cole. “There’s no disguising it, I always love God for hearing my cry.”

CALLING ALL HEARTS reflects the growth of KEYSHIA COLE vocally, mentally and spiritually. Her fearless spirit is carefully weaved inside her DNA and translated through the fiber of each song in which she breathes life. “Since I was young I’ve known you have to stay at it and keep going with every situation in your life because, there’s always a better day tomorrow. No matter what cards are dealt to you, you control your life’s decisions and determine what happens. People can do whatever they choose if they only allowed themselves to.”

Throughout the seasons of time, KEYSHIA COLE continues to explore the wonders and blessings of love and family. Her critically acclaimed BET reality series “Keyshia Cole: The Way It Is” became the #1 most-watched series in the network’s history during its three-season run from 2006-2008. And Keyshia is excited to open that side of her again with a new biopic in the works.

While she explores partnership, motherhood, love, and life, KEYSHIA claims new musical territory with CALLING ALL HEARTS, and remaining clear about her time and season: “I pray and hope that kids and young people who have seen what I’ve seen being alone, heartbroken – whatever you can take from me, understand God is first and that you can do anything if you try. Have a giving heart and give it your all. Keep everything positive and moving forward.”